ARC Romance Mini-Reviews: I Want it That Way by Ann Aguirre & Talk Sweetly to Me by Courtney Milan

Aguirre's I Want it That Way is a relatively unexceptional piece of literature. It isn't the New Adult Series I'd recommend on a whim but, an important distinction to note is that I also wouldn't warn away from it. For me, it seems to be a new milestone in New Adult literature when I can find a novel that steers clear of slut-shaming, misogyny, rape, or other over-used tropes. Thus, though I hesitate to say it, Aguirre's I Want it That Way belongs to that new milestone of New Adult; not remarkable but a far cry from terrible too.

I Want it That Way is, at its core, a romance novel. Nadia moves into a two-story apartment complex and finds herself living above Ty, the gorgeously sexy single-father who works by day and studies by night. Nadia and Ty have chemistry--they can feel it, even from the vertical separation of a few feet, but with his son and complicated lifestyle there is no place for Nadia in Ty's life. But as Ty spends more and more time with Nadia he finds it more and more difficult to stay away. Just a brief place-holder relationship until The One came along...it couldn't hurt, right? But what if The One was there all along and Ty just won't open his eyes...?

I hardly feel the need to touch upon the love story within I Want it That Way. Just the way I like it it's a slow, tortuous burn and I appreciate the fact that Nadia and Ty get to know one another on an emotional, mental level before they broach a physical relationship with one another. It isn't easy for Ty to let Nadia into his life and, similarly, it isn't easy for Nadia to choose to be with Ty. Ty lives the life of an individual at least another decade older than he really is and for Nadia to adjust to that--and vice versa--is tough. Aguirre leaves no stone unturned, however, in exploring their relationship and its struggles and I found it a delight to read. Moreover, I really enjoyed Nadia's collegiate experiences bleeding into her romance. Whether it be a tiff with her best friend and roommate or lending a shoulder for another friend to cry on, the dynamics of these four roommates and Nadia's role in the midst of it, juggling her school work with her social life with Ty, was not only a balance to have to live through but also to write. Granted, Nadia's experiences as a college student are not the focus of this novel but their presence enhanced the tale and brought Nadia's unique decisions into broader perspective. Perfect for a lazy afternoon or a stormy night, I Want it That Way is quick, entertaining, and satisfying. While you can certainly ask--and expect--more from both Aguirre and New Adult, this is likely the best you'll read of them together. 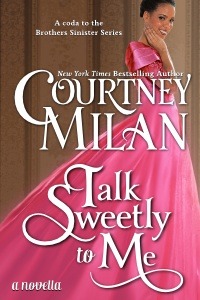 
I find myself utterly charmed by the notion that the Brothers Sinister novellas shine brighter than their full-length companions. Whether it be The Governess Affair, A Kiss for Midwinter, or--now--Talk Sweetly to Me, each of these three novellas have contained tender, heart-tugging romances whose brevity worked to their advantage. That's not to say I don't adore the novels which make up this memorable quartet (or that I treasure A Countess Conspiracy or The Suffragette Scandal any less), but it simply wears easier on the heart to adore smaller volumes.

Stephen Shaughnessy, the infamous advice columnist for a women's magazine and a self-proclaimed feminist to boot, finds himself falling for the inexplicably brilliant Rose Sweetly. From the surface, Rose appears to be timid, shy, and painfully quiet. Not many know of her nor do they recognize the mathematical genius she possesses--but Stephen has. Initially having met Rose on the street, Stephen finds himself constantly seeking an excuse to bump into her, probe her analytic mind, and emerge from their discussions a different man entirely; one whose world-view has been shifted, ever-so-slightly. When the opportunity presents itself for Stephen to learn from Rose, employing her as his tutor, he eagerly pushes forth his luck. Stephen claims not to be seducing Rose but his every interaction, word, and gesture is simply too sweet to be true...or is it?

Talk Sweetly to Me is a novella of intense longing. From the beginning itself, Milan presents us both with Rose's perspective and that of Stephen's as well. Juxtaposed alongside one another it isn't difficult to see that both parties are already besotted with each other--they just don't recognize the full extent of their affection for one another. Thus, to read of their crackling dialogue, witty banter, and charged movements is only to prolong the agony, the wait, the slow-building sexual tension. Moreover, as can only be expected from a novella with a title of Talk Sweetly to Me, the story is extremely, extremely sweet. Not only is Stephen, known as a notorious rake, a complete gentleman at all times but he never allows Rose to lose sight of herself, which I love. What's more, as a colored heroine Rose adds another dimension to the otherwise Caucasian-dominated historical romance genre. From her early struggles as a woman pursuing the STEM fields to the drawbacks she faces (and witnesses!) due to her race and the color of her skin, Talk Sweetly to Me isn't always laughter and charm. Over such a short expanse of pages Milan manages to pack an entire era, truly, but all with Stephen and Rose's romance remaining sharply front-and-center. Despite the fact that there remains a tinge of bittersweet longing for more of the Brothers Sinister in my heart, Talk Sweetly to Me is a short, all-consuming love story with the sweetest of endings. Truly, the perfect coda to a perfect quartet; I can't wait for more, Milan.
Posted by Keertana at 12:00 AM