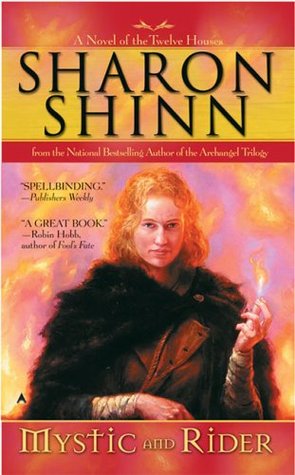 From the ages of six through thirteen, I dreaded Back-to-School Night. Every year, my parents would meet the new teacher I had been assigned that fall and every year, that teacher would repeat the same phrase: "...an advanced and voracious reader, but fails to read diversely." Following those meetings, my parents would return home with a concerned frowned on their faces, having been told their daughter was bright and apt in all subjects, but simply refused to pick up a novel outside the fantasy genre. In fact, it is thanks to those very same Back-to-School Nights that I've stockpiled on beautiful editions of the classics: everything from Little Women to Anne of Green Gables has made its way under my Christmas tree for years, to no avail.

Eventually, I grew bold enough to venture into contemporary fiction, but to this day, it fails to bring me the same sense of grounding -- of lightness of being, if you will -- as fantasy does. I can't explain it, but there's something incredibly calming about losing yourself in an other world, forced to remember a multitude of names, cities, and countries which don't exist on our plane, but do in another.

Mystic and Rider, after a long and hollow reading slump, has awakened my passion for both reading and writing after a too-fatigued era of empty novels. Inevitably, fantasy never fails to bring me around; I just don't know why it took me this long to remember.

Shinn's introduction into her Twelve Houses Series is a bold and unforgettable story. I dare you to try to put this aside after finishing its first chapter -- it may as well be declared impossible. While many reviewers have claimed Mystic and Rider is slow to start, I found it riveting from beginning to end, unable to turn my eyes away from this tale of political turmoil and religious upheaval. Gillengaria, a country overseen by a king, twelve houses, and home to mystics, is in grave danger. Rumors that the king has been ensnared by a sorceress, his young new queen, have shaken the land and, secretly, the houses prepare for war. Senneth, a mystic in the king's favor, is dispatched with two of the King's Riders, Tayse and Justin, alongside Kirra, another mystic, to travel the kingdom and bring back news of the nation's unrest.

From the surface, Mystic and Rider follows the most basic format known within the fantasy genre. Shinn's novels, as I've learned, though action-packed with plenty of intriguing plot action, are driven primarily by her characters. Senneth, our protagonist, is a powerful mystic, capable of controlling fire. Kirra, a shapeshifter, joins her journey with her bodyguard, Donnal, yet another shapeshifter. Lastly, Cammon, a young boy Senneth finds in captivity and frees, discovers that he, too, is a mystic, capable of sensing those nearby. Accompanied by two King's Riders, deadly bodyguards whose sworn loyalty to the king and weaponry skills are legendary, the six traveling companions are far from friends. Justin mistrusts mystics and aristocrats, Donnal mistrusts anyone who isn't Kirra, and Tayse is wary of Senneth for her secrets and, more importantly, for her lack of allegiances. With the exception of Senneth and Cammon, each of these travelers bears loyalty either for the king or for one of the twelve noble houses they belong to. With a multitude of warring loyalties, the inner politics of this group alone are sufficient to carry forward this story.

But Shinn's world-building is beyond impressive. Mystics, or those who possess magical ability, burn when brought in direct contact with moonstones. As such, a religious sect devoted to the Pale Goddess of the Moon, is bent on eradicating the mystics from Gillengaria. Meanwhile, the twelve houses are torn, some determined to erase mystics while others merely seek to install a different king to the throne. Wherever Senneth and her group of companions travel, they lack no end of deception, intrigue, and danger at every corner. What makes Mystic and Rider a remarkable novel, despite its hefty length, is its sheer presence. Shinn allows her characters to creep under your skin, slowly but surely. Each of these six travelers, remarkably unique and starkly different in their own light, find a way to breach their differences and trust one another, quite unexpectedly, as the story wears on. In most novels, such situations can seem easily contrived but Shinn weaves these into the narrative, never deviating her focus from Senneth's task and the political upheaval of this nation. Yet, the emotional impact of this novel never suffers for that focus, only benefits from it.

Moreover, though, the romance present within the pages of Mystic and Rider stole my breath away. Subtle and slow, wavering but kind, doubtful yet aware; it's a mature, entirely beautiful arc that unfolds carefully, rewarding the reader for their patience. Senneth, the protagonist and one of the main narrators of this tale alongside Tayse, is precisely the type of heroine I crave to read about. While she is powerful, she is no "Chosen One" for her successes are empty without the help of those around her. Yet, it is her strength of will that builds her into such a compelling protagonist. Shinn balances courage alongside vulnerability so well within each of her characters, rendering them incredibly realistic, and then she does it again, balancing their personalities and strong wills alongside a romantic interest in such a way that they complement one another, on perfect ground and equal footing despite the surface inequalities that may lie between them. I remain in awe of her skill, constantly, and can only be grateful for having discovered such characters; characters who not only understand one another, but who -- inexplicably -- understand me.

It is hard to tell if I've enjoyed Mystic and Rider more or Troubled Waters, though I suspect it is the former, after all. Sharon Shinn's novels, even the one I have been disappointed by, always manage to strike a powerful cord within me, likely because of their quiet brilliance. While I heartily love the loud, voracious novels of fantasy, such as The Song of Fire and Ice Series, I find that I equally appreciate -- if not more -- the silent stories; just as strong, just as fiery, just as compelling.
Posted by Keertana at 12:00 AM