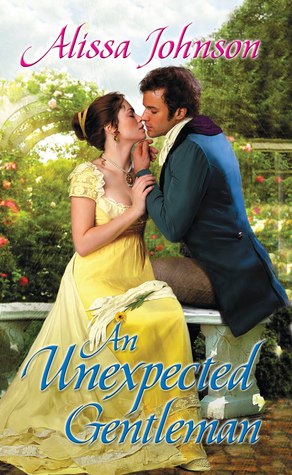 Quite unexpectedly, An Unexpected Gentleman wound its way into my thoughts, particularly during an untimely moment in conversation or while I performed my day-to-day tasks. Johnson's Nearly a Lady* is a warm, cozy read; the type of book whose characters don't demand your attention, merely command it as you become further embroiled in their story. Conversely, I read An Unexpected Gentleman tense, not even certain if I enjoyed it until the very end when I finally realized I did; truly.

From the surface, An Unexpected Gentleman seems to be a relatively common historical fiction novel. While Nearly a Lady sets itself apart with its lavender cover, not to mention its setting of a remote farmland, everything about An Unexpected Gentleman from its cover to its synopsis detailing the easily-scandalized ton merely seemed dull in comparison. As I've come to recognize from Johnson's prose, however, it isn't so much what she writes as it is who she writes. With such vibrant, distinct, and complex characterizations, it's impossible not to feel wholly involved in her tales; heart pounding, breath gasping, the whole package.

As a loose companion novel to Nearly a Lady, this story features Connor, the prison inmate we briefly saw through Freddie's eyes in Nearly a Lady, and Adelaide, the woman he pines for through the bars of his prison window. An Unexpected Gentleman, though, begins not with romance but with revenge. Sir Robert, Connor's half-brother who throws him - without justification - into prison, is about to propose to Adelaide when Connor steps in, compromises the lady, and forces her hand in marriage. For Adelaide, this is no true tragedy. After all, she finds Connor's company far more pleasing than that of Sir Robert, but his status as a gentleman and hefty sum of five thousand pounds a year is necessary for Adelaide to help her family survive. Wolfgang, Adelaide's wayward older brother who spent their money and landed himself in jail, has left Adelaide as the sole caretaker for her baby nephew and younger sister. As such, to land not one - but two! - marriage proposals has left Adelaide reeling. But, money and status aside, with two lying, scheming brothers bent on nothing but causing each other pain, is there room for Adelaide to find happiness at all?

While, at first, it can be easily to lose oneself in the entertaining, witty dialogue between our two leads, it soon becomes evident that Connor is far from the hero of our tale. Despite the predicament he has placed Adelaide in - dishonoring her name in polite society - he feels not a shred of remorse. Moreover, from the first page itself, Connor is constantly keeping secrets from his future-wife. Although Connor forces Adelaide to dream for herself, thinking beyond the mere necessities of survival, and Adelaide in turn forces Connor to appreciate his blessings, it's a long, difficult haul to love for them both. It isn't always an easy relationship to watch unfold, only because I'd spend pages stewing in anger at Connor and hurt that Adelaide found herself in such a position that she was forced to deal with the deception surrounding her with calm, not anger. I admired her. I fought for her. I wanted her to win. But, in this battle, there's no Team Adelaide - only Team Connor or Team Robert. And, trust me, it becomes quite obvious which of those two siblings is the lesser of the two evils.

For all my criticism of Connor's attitude, however, I found myself unable to resist his charms. Like Adelaide, I fell in love with his kindness, patience, and sincere caring that hid underneath his veneer of a rogue. Though he could often make my blood boil, I grew to love his faults as well. As I neared the end of An Unexpected Gentleman, however, I began to worry over the conclusion of this love story. It just wouldn't be right, to me, for Adelaide and Connor to finally win their happily-ever-after if Connor left unacknowledged his past errors - errors Adelaide forgave and saw past, trusting him despite the fact that he didn't give her much incentive to do so. But, rest assured readers, Johnson fails to disappoint and I finished An Unexpected Gentleman pleasantly surprised at having enjoyed this tumultuous journey after all.

*I have not--and will not--be reviewing Nearly a Lady, but I heartily recommend it. I rated it 4.5 Stars and it's one of my absolute favorite reads of the year. I simply cannot put into words the spell I fell under while inhaling it one rainy evening, hence the reason there won't be a review, but I'd encourage interested readers to read Angie's review of it--after all, it convinced me! :)
Posted by Keertana at 12:00 AM