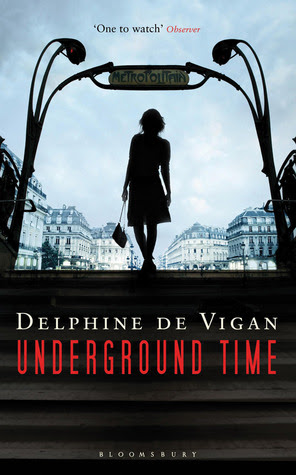 Underground Time is a difficult book to read. I found myself setting it down, time and time again, telling myself I wouldn’t pick it back up because there was enough depression in life without needing to read about it in a book too. When I did, inevitably, pick it up, I found myself reciting, “It’s just a book, it’s just a book, it’s not real life, don’t let it get to you, their story isn’t your own,” over and over again. Delphine de Vigan, however, makes her character’s stories my own; makes their pain so palpable and sharp that it aches my heart. And, after finishing this book, it is all I can do to not bury myself under the covers and lay there, warm and satisfied, unwilling to face the harsh realities of life. I owe it to this book and these characters, which have become so real to me, to persevere on, at least for a little while more.

What makes de Vigan such a brilliant author is her prose. Even in the first novel I read of hers, No and Me, I was blown away by the subtle beauty of her writing, the manner in which her phrases were thought-provoking and contemplative, all while retaining an ethereal loveliness about them. Thus, when I heard that de Vigan had written just one other adult book that had been translated into English, I rushed to my library to make them order it, just for me. Underground Time, though, is far different than No and Me was. Where her young adult story is a coming of age story full of silver linings despite the fact that it acknowledges that certain aspects of life simply cannot be changed, Underground Time is a story of two depressed adults for whom life has simply pressed down upon, much like the sky pressed down upon Atlas, the Titan.

Underground Time charts the story of Mathilde, a single mother of three children who is the victim of corporate bullying. After gently disagreeing with a minor point her boss made, Mathilde has found herself slowly spiraling away from all she loved about her job. Over the past eight months, her boss finds every reason to criticize her and turn her co-workers against her, all while lying about receiving important documents until, finally, on May 20th, Mathilde is replaced. Thibault, who shares the dual third-person narration in this story, is a doctor who is caught in a relationship of unrequited love. Finally, he finds it within himself to end his relationship for giving love and receiving none in return is every bit as painful as it sounds. Underground Time is a story that takes place over one day, filled with contemplation, longing, and flashbacks, detailing the joint story of Thibault and Mathilde, strangers who don’t know each other, but whose lives contain similar threads of depression and loneliness.

Underground Time takes place over the span of just one day, which is why it tends to drag a little after the half-way point, Mathilde and Thibault having the same depressing thoughts, only expressing them in a slightly different manner. Yet, despite this, the novel is surprisingly readable. Mathilde and Thibault both have their own individual voices which only complement each other. Although both our main characters do not know one another, it is evident from their narration that they should know each other for both of them want similar things from life. For me, the story of Mathilde and her heart-wrenching corporate discrimination seemed to be the overarching story arc that the tale of Thibault only enhanced. As a doctor, Thibault travels the city of , meeting dozens of people with their own problems and depressions.

In many ways, Underground Time is equally a story of the city as it is of Mathilde and Thibault. It seems as if everyone in the city, despite being so occupied with their own lives, are eventually going to reach that point of exhaustion in their life, in some way or the other. With Thibault, we can see so clearly the multi-faceted side to this city, one teeming with life and death in equal parts. Furthermore, an advantage of having the narration of Thibault told side-by-side with that of Mathilde is that we can see so clearly the cruel game that fate plays with them both.

As with any dual narration, one always expects the characters to meet and while that standard is no different with this novel, it is a patient process. It seems as if, many times, Thibault and Mathilde are just about to meet one another, purely by coincidence, when, at the last instant, they just miss one another. Underground Time, unlike what I expected when I cracked open the spine of this novel, is not a romance. Instead, it is a story of two people who are forced to make tough decisions in their life, whether it is ending a relationship that isn’t working out or coming to the end of an unhappy time in an office building. Yet, what I love about this is that these actions are neither good nor bad decisions. Instead, they are inevitable. At times, life backs us into a corner where we have no choice but one left before us. Furthermore, this is a story not of the hope of a new and better life, but rather of the forlorn and hopeless period in-between; before one feels that life can better, they must first feel as if it cannot.

All in all, Underground Time is a novel that I know many of my friends will enjoy but it is, in equal parts, a novel I know many of my friends will despise. It is achingly real, to the point where one is compelled only to read stories of happiness afterwards, but it’s worth it. Delphine de Vigan has, yet again, managed to write a novel that is unique, thought-provoking, and shockingly realistic. While I do believe the ending is conclusive enough, I know many readers who have felt otherwise for, truly, it is open and ambiguous like few things in this world are. Yet, I found it was the perfect ending, both for this novel and its characters. It was fitting, in a way only life, which continues to go on despite everything it throws at is, manages to be.
Posted by Keertana at 12:00 AM