ARC Mini-Review: The Cadet of Tildor by Alex Lidell 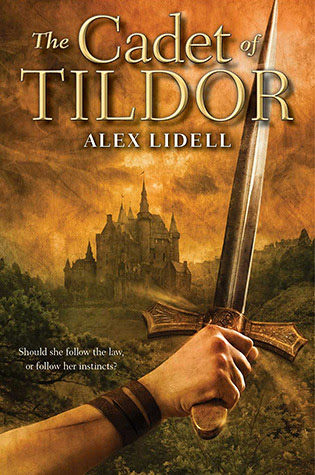 Title: The Cadet of Tildor

I suppose, in many ways, I didn't give The Cadet of Tildor much of a chance. I painstakingly read through the first quarter of this book before giving into my desire to skim the pages until I was nearly half-way through the novel and began to realize I was well and truly wasting my time. The Cadet of Tildor is not a bad novel, but it just wasn't one for me. As a high fantasy junkie who has grown up reading Lord of the Rings, Harry Potter, Tamora Pierce, Kristin Cashore, and Megan Whalen Turner, Alex Lidell falls seriously short of other fantasy writers of this age.

The Cadet of Tildor starts out strongly enough, introducing us to a fierce and strong-willed protagonist, Renee. While I instantly admired her for standing up to her father and willing to follow her dreams of completing her training as a Cadet, despite the fact that she was up against stronger men, I was unable to feel much of a connection with her as the novel wore on. From the onset, her friends were flat and two-dimensional and the revered trainer seemed to lack personality as well. Or, perhaps, they didn't lack personality and it was just the fact that they were so like every other fantasy character out there that I was unimpressed. The Cadet of Tildor is excruciatingly unoriginal and, upon skipping to the end, I can already inform you that its last line is the exact same last line from Turner's King of Attolia, only without a complex situation and three novels to back it up.

In addition to my lack of feeling for the characters, I simply felt very underwhelmed. Nothing much happens during the beginning and neither are the characters or world set up in a manner I found to be interesting. In fact, I virtually have no grasp of this world or its politics whatsoever. Ultimately, Lidell's debut is a disappointment for me simply because I go into fantasy expecting more from it and this one just didn't live up. Unlike the contemporary genre, which often lets me down and I've come to accept as a hit-or-miss genre for me, fantasy usually never fails to amaze me, but the recent revival of YA Fantasy certainly has.

For newcomers into fantasy or those of you who are unfamiliar with the works of Megan Whalen Turner or Tamora Pierce, The Cadet of Tildor is likely to take your breath away. It is extremely well-written and the words flow smoothly from the page, proving that Lidell can, indeed, write. Yet, when compared to other fantasy works, it falls short of a masterpiece by far. Of course, the novel may drastically improve, but as I already feel nothing for the characters, I sincerely doubt I'll enjoy this one too much more.
Posted by Keertana at 7:00 PM