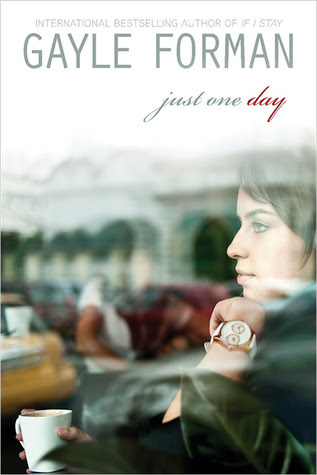 Nearly a decade ago, someone once told me that books are like memories; within their pages, they store your emotions and thoughts, a document of sorts of your experience. I still don’t know how true that statement is, but I dearly hope it is – at least when it comes to Just One Day. Nothing better than this book itself can summon up the whirlwind of emotion I felt when I read it. Although I cracked open its spine with trepidation – there are, after all, a plethora of mixed reviews out there – my feelings quickly changed from that of anxiety to excitement as I was swept up alongside Allyson on her breathtaking journey. At one point, I wasn’t sure if I was laughing or crying for I was so full of giddy happiness and bittersweet longing - those are the types of feelings a Gayle Forman novel inspires in you. I finished Just One Day with a smile on my face, my heart swelling with pride for Allyson, who felt as close to me as my own best friend, and although the pang I feel when I think of this novel is only an echo of what I feel for Forman’s If I Stay and Where She Went duo, I still love it, albeit in an entirely different way.

Just One Day is a novel that will very easily either captivate or disappoint readers. It’s a New Adult novel that almost demands that you be a teenager to truly understand it, for Allyson’s journey is such a personal and nostalgic experience, one that everyone can definitely relate to. One of the best ways I can find to summarize it is a realistic rendition of Kristen Hubbard’s Wanderlove. Although Wanderlove is one of my favorite books of all time, I can’t deny that the chances of traveling to a new country and finding a hitchhiker to explore with are rather low. Thus, Allyson’s summer experience in , a disappointing one full of touristy stops and not enough life is easier to relate to. When Willem, an enigmatic Dutch actor who Allyson sees performing Shakespeare in , offers to take her around – for just one day – she agrees, despite her goody-two-shoes attitude.

What follows is a day of whirlwind journey; it isn’t perfect, but it’s real and it’s far more rewarding than any other trip on Allyson’s summer vacation. Perhaps best of all, to Allyson at least, is that she is no longer Allyson, the girl who listens to her parents, studies hard, and never lives life the way so many other teens do; now, she’s “Lulu”, a nickname Willem gives her, and as “Lulu,” Allyson is finally free to let loose the person she truly is inside. Nevertheless, her exhilarating journey is abruptly halted when, the next morning, Willem is gone. Now, Allyson is distraught, both at thinking that Willem may have just used her and at contemplating her life in college as a pre-med student – a path that her mother, not her, wants to follow. As Allyson will learn, however, her day in wasn’t about Willem at all – it was about her and finding out that she was more than she – or anyone else – ever quite imagined.

Just One Day, as I’m sure countless reviews have stated, is a journey of self-discovery. Although I will admit that it isn’t wholly original, it is certainly memorable. Allyson has a certain vulnerability about her that makes her impossible not to love. In Paris, she may have been pretending to be “Lulu”, but that was who she really was and she struggles to find a way to be that person again, all while continuing to please her parents and hold onto her childhood best friend, Melanie, who constantly reinvents herself. One of my favorite aspects of this tale was the subtle heartbreak that came not only with seeing Allyson and Melanie grow apart, but also Allyson and her parents. In their place, however, Allyson makes new friends, never replacing those from her past, but simply realizing that growing up also means leaving room for new people to join her life, such as Dee, the African American boy she meets in her “Shakespeare Out Loud” class; the person who shows her that although she has many personas – “Lulu”, pre-med student Allyson, reliable Allyson – who she really is is a mixture of all the roles she plays, and still so much more.

In my eyes, what makes Just One Day such a hit-or-miss novel is the mere fact that Allyson is a character trying to find her place in the world. After her trip to , she comes to the stark realization that no one really sees her – not her parents, not her best friends, no one – except for Willem. Willem, who took a bargain in spending a day with her, unknowingly changed her entire life, not just because of who he was, but in what he brought out inside her. What I loved about this story was that Allyson found herself again - finds herself again – and this time, without Willem. It is this journey, this third journey almost; the first being her wake-up call, the second being her slow emergence from the typical life she leads that isn’t really hers, to this now final journey of finding who she is all through her own experience, her own friends, her own interests, and her own initiatives. It’s beautiful.

Nevertheless, I will admit that Just One Day is not a perfect story. For one, some secondary characters, such as Allyson’s father, are astonishingly underdeveloped, lacking personality when surrounded by such well-fleshed out characters. Furthermore, this novel failed to impact me on an emotional level equal to that of If I Stay or Where She Went. I can’t really pinpoint what it is that made this novel fall for me, but a certain aura or fully nuanced aspect of Allyson, perhaps, was missing. Unlike other readers, however, I was never bothered by the mysterious figure that Willem remained throughout the novel. If anything, I loved the way he was portrayed in this book – a traveler, a lonely young man, a player…or someone who we’ve all just judged too quickly, because, perhaps, there’s more to him and his story than what we see before our eyes. Yet, what I liked best was that he didn’t reappear in this story – once he left, he was gone and then it was all Allyson and the manner in which she came to terms with who he was and what he did for her, changing her life, was remarkable.

Just One Day is a novel that just must be read. It is beautifully written and to see Forman take on something different – the idea of living truly and happily instead of the idea of choosing between life and death – was refreshing. Of course, there are many authors who have written self-discovery novels in the past, and I have liked some of them more than this one, but Forman’s tales just never leave my head. I was thinking about this the whole day, ever since I finished it last night (at 11:54, which means I actually read Just One Day in exactly a day!), and I am still convinced that I have not extracted the full depth and meaning that this story has to offer. It’s a universal tale, one that will transport you to other countries, make you feel emotions you thought you could never feel, and ultimately, just as it changed Allyson, it will change a small particle of you too.
Posted by Keertana at 9:33 AM