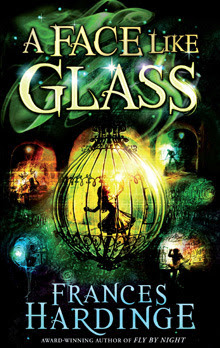 A Face Like Glass tells the tale of Caverna, an underground city, much like Alice's Wonderland. In Caverna, babies are born with the inability to show their emotions on their face and, as such, are taught how to mold their faces into expressions by wearing masks. If that wasn't strange enough, Caverna is a land of magic - although it is never seen as magical - for the wines can erase your memories, cheeses can help you see the future, and perfumes can command your thoughts. Into this world is thrown Neverfell, a girl whose every thought is shown visibly on her face. As such, she is a threat to those in Caverna who fear the honesty of her gaze but also seek to exploit her innocence. Neverfell is first apprenticed to Master Grandible, a renowned cheese-maker who hides away in tunnels to escape the ruthless politics of the Court. When Neverfell chases a white rabbit, with the original intent of bringing it back to her master, she stumbles into the world of Cavera and from there, her journey is every bit as crazy as can be imagined.

I hardly know where to start when it comes to Hardinge's spectacular novel. For one, let me assure you that it blew me away and, despite being a Middle Grade Fantasy novel, I found that it was every bit as thought-provoking and intelligent as YA and Adult reads, if not better because of its subtleties, cleverness, and surprising plot twists. Caverna is a city with secrets, a cavernous tunnel that changes ever-so-slowly and calmly watches over the people in her kingdom, all of whom are pawns in a giant game of politics. Whether it be the powerful families who make the delicacies of Caverna and battle amongst each other in a quest for power or the Grand Steward, the ruler himself who has transformed himself in such a way that one eye is always open, always watching for betrayal, Caverna is a land where no one is safe.

Into this world is thrown Neverfell, a naive and innocent child after having been sheltered by Master Grandible, away from the deceitful society of Caverna, all her life. At first, the people of Caverna are unsure whether to be terrified of the raw honesty in Neverfell's face or simply use her to exploit their own malicious intent. As such, as she passed around in this game of Court from powerful families to powerful leaders to powerful enemies. Although Neverfell is initially very trusting of everyone, including strangers she meets, her resolve, good will, and resilient nature make her an engaging heroine, not an irritating one. Furthermore, as the novel wears on, her growth is gradual, both as a person and as a player in the game she has been unwillingly thrown into.

While Neverfell remains the most fleshed-out of all the characters in this novel, nearly every character in this tale becomes well-developed with the progression of this tale and, best of all, the villains aren't all black-and-white, but rather multiple entities of grey. In fact, seeing this world through the eyes of Neverfell, it is difficult to be sure, at times, if friends are truly enemies and enemies are truly friends. In the midst of this political intrigue, Neverfell slowly comes to realize who she is. It is evident that she is not a citizen of Caverna but rather of the outside world where, rumor has it, the sun burns off your skin. As Neverfell has no memory of her childhood, of how she came to be in Caverna, this intriguing tale of political mystery is in equal parts a gentle story of growing up, of becoming the person you can be when circumstance forces you into dark corners. It seems like a very dark tale at times, but rest assured that Hardinge always keeps the silver lining just within reach.

Now, how else can I possibly express my love for this story? It does lag a bit in the middle as the climax of the story approaches, but either than that small flaw, it is very nearly perfect in every way. Once immersed into the world Hardinge has created, you won't want to come out and, when you do, you'll most likely realize that you've gone just a little mad while in Caverna yourself. A Face Like Glass is such a multi-faceted tale, forcing you, as the reader, to not only join in on a world full of lies, but also to question the lies in our own every-day lives. Even more than that, though, it is a tale of revolution and of flying free from control and power, whether it be in terms of social class or just escaping from the tight web of lies that this underground city runs on. Either way, you can read A Face Like Glass with one surefire thought - you will emerge from it changed, reflective, and itching for more of Hardinge's writing, even if it means walking into the children's section of your library.

Reviewer's Note: It should be known that I am absolutely terrible at writing reviews for books I love. I hardly know if what I've written here makes sense, so allow me to direct you to the review of one who constantly humbles me with her prose. Catie, at the Readventurer, convinced me to pick this up with her review and, without a doubt, she will convince the rest of you as well. I cannot recommend her review enough.
Posted by Keertana at 12:00 AM