ARC Review: Through the Ever Night by Veronica Rossi 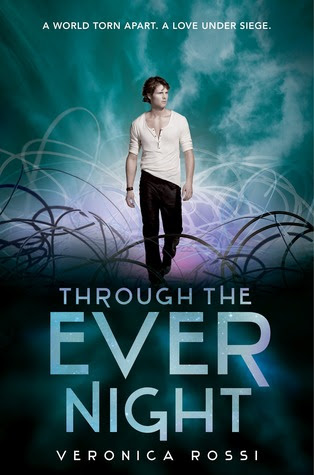 Title: Through the Ever Night (Under the Never Sky, #2)

Through the Ever Night is one of the few sequels that truly took me by surprise - in the best possible way. I can't quite articulate how excited I was for this book, especially after loving Under the Never Sky, so to say that my expectations were met would be an understatement. Once again, Veronica Rossi has proved her prowess as a writer and if there's anything I can guarantee, it's that fans of the series will most definitely not be disappointed by this scintillating sequel.

Through the Ever Night picks up exactly where Under the Never Sky left off with the reunion of Aria and Perry. Unlike its predecessor, which was rather fast-paced and full of romance, Through the Ever Night is filled with a steady undercurrent of loss, of longing, and an atmosphere of tension. Even from the beginning, we can see that this won't be the same swoon-worthy romance we were treated to in the first novel. Instead, Aria and Perry are practically estranged from one another as Aria is very much an outsider in Perry's tribe and their relationship is kept a secret. Yet, before Perry and Aria can even begin to come to terms with the direction their relationship is taking now that they are no longer alone, Aria and Roar are whisked away to find Liv, Perry's sister, and fulfill the task of finding the Still Blue.

It seems weird, but for some reason, I always enjoy romances that are tinged with a hint of longing, despair, and utter want, which was exactly what I got with Through the Ever Night. Even while living in the same tribe, Aria and Perry seem miles away from one another, until literally, they are. As Blood Lord of the Tides, Perry has an immense amount of responsibility, and it doesn't all come so easily. It is evident that as a leader, the role one plays is extremely different and seeing Perry struggle through his duty, making mistakes and blunders, all while slowly coming to realize his significance and grow into his role, is an incredible journey to see. Just like with her debut, Rossi manages to capture the essence of humanity within her characters, making them shockingly three-dimensional and realistic in the growth and change that she ensures they go through throughout the novel.

Aria, too, is a different person. Although we don't see as drastic a change of growth in her as we do in Perry, she is a far cry from the frightened Dweller we met in the beginning of Under the Never Sky. Aria and Roar's friendship is as strong as ever and seeing them interact, console each other, and just generally be there for one another without any romantic feelings on part of either of them was utterly refreshing. I love that Rossi made Aria just as much a friend to Roar as Perry and furthermore, that she made Roar such a huge forefront in this novel. Although he doesn't have his own PoV in this novel, like Aria and Perry do, a large part of the plot revolves around him and seeing him change and grow is rewarding as well.

In addition to the main characters, the majority of the secondary characters from Under the Never Sky return in this novel, some of them in unexpected ways. I was thrilled to see them all come back and see the role they played in moving the plot forward. If I have any qualms with this story, it is just that it seems as if not enough quite happens. It almost seems as if there is still so much left to happen in the last novel, but the plot never lags, never slows, and never bores the reader. It isn't as fast-paced or intriguing as Under the Never Sky, and many of my questions concerning Aria's parentage remain unanswered, but it keeps you flipping the pages and the world-building is explored a little further as well.

Ultimately, I can see this novel being an instant hit with fans of Under the Never Sky for it is a fabulous follow-up novel. Veronica Rossi just keeps surprising me. While Under the Never Sky felt like Aria's story, TtEN is Perry's in a way and it's phenomenal. I simply love the character development in this novel. It completely blew me away with its depth. COMPLETELY. Furthermore, it was an incredibly emotional novel. INCREDIBLY. Seriously, my feelings and emotions were EVERYWHERE. It was an incredible whirlwind of pure emotion for sure. If there is anything I know for sure it is that Into the Still Blue is going to be SUCH a great conclusion - I can just tell.


HUGE hugs and kisses and thank-yous to my friend, Amelia, at The Authoress for lending me this book. You're the BEST, Amelia! THANK YOU!(:
Posted by Keertana at 6:13 AM