ARC Review: Made For Sin by Stacia Kane 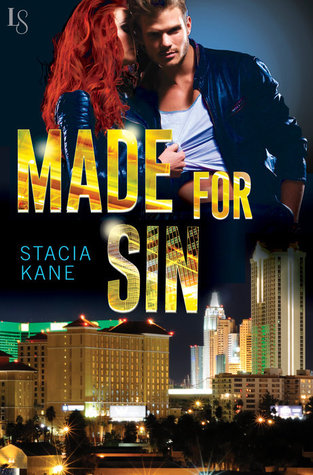 Title: Made For Sin

Stacia Kane's Downside Ghosts series is simply incredible. Each book is better than the last, the characters well-developed and unique in a world that is bursting with originality and darkness. I've been anxious and excited for the latest Downside Ghosts novel for years, but when I realized that Kane was starting a new series, I immediately transferred those emotions onto Made For Sin. And that is, certainly, my fault. Made For Sin is an interesting, certainly thought-provoking new foray into urban fantasy for Kane but it is no Downside Ghosts. Sadly.

Where this novel falters is, unfortunately, in its rocky beginning. Made For Sin takes place over the course of three days and that first day--nearly the first third of the book--is painstakingly slow. The mystery is gruesome, but fascinating, so it is a surprise that it is Kane's characters who leave the story bleak and dull. Speare, our narrator, works for a notorious crime boss in Las Vegas, tasked with determining who has been murdering--and slicing off body parts--of said crime boss's right-hand men. In order to help solve the mystery, Speare turns to Ardeth, a thief and dealer in magical artifacts. But Speare and Ardeth are not safe and as the bodies--and missing body parts--keep piling up, Speare must decide which danger is more pressing: the killer on the loose or the evil in his head.

Literally, there is evil in Speare's head. At thirteen, a demon appeared in Speare's head, sharing his body with him. In order to keep the beast at bay, and satisfied, Speare must sin. If he keeps himself from sinning, the beast could take over--and when that happens, Speare surges back into his body, often overlooking a carnage of death. Thus, Speare has learned the art of sinning like no one else, keeping himself aloof and alone so that the beast cannot hurt anyone else. Unfortunately, what this means is that Speare is quite...boring. When he hasn't sinned in awhile, like at the start of this novel, he is nearly incapable of holding a witty conversation, instead focused on keeping the beast held down. His entire existence revolves around the beast--which I completely understand--but it's akin to befriending someone whose existence revolves around their significant other. After awhile, there's just not that much more to them.

Where this story really picks up is when the beast begins to make an appearance. The mystery is extremely well-paced and unpredictable, so it's not easy to set this book down, and Ardeth, though a little bland at first, grows into her character, proving to be indomitable and clever. As Speare's demon grows stronger, flickering in and out of his mind-view, Made For Sin becomes a strong, four-star read. I sped through the pages, marveling at the complexities and layers that the beast brought to Speare and Ardeth's relationship. The ending, with its plot twists and unexpected sacrifices, is compelling--it's certainly enough to have me eager for the sequel (although another Downside Ghosts book, first, would not be unwelcome).

Nevertheless, I cannot deny that the first third of this story isn't as fascinating as it could be and, further, I feel as if this story has been written before, in bits and pieces, and in some ways better. Sarah Rees Brennan's Demon's Lexicon and Lynburn Legacy trilogy contain demons and voices-in-your-head, respectively. More recently, V.E. Schwab's This Savage Song is about monsters and humans; how a monster tries to keep himself from killing/eating in order to convince himself of his own humanity. It's similar, in so many ways, to Speare's sinning and while this book is Adult while those previously mentioned are Young Adult, there's nothing more that makes this novel better.

Made For Sin is an interesting read. I'm curious to see where the future of this series lies and would love to read more about this world--not to mention, there's an elephant (or demon) in the room that needs to be taken care of. But if this is your first foray into Stacia Kane, read her Downside Ghosts series instead. It's vivid and alive, its characters leaping off the page and never dull, not for a single moment. Its romance is sexier, stronger, and far more swoon-worthy. Naturally, I'll read anything this woman writes, but her latest is a mere shadow of her full potential.
Posted by Keertana at 12:00 AM