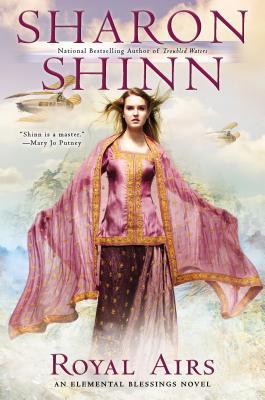 Note: This reviews contains NO SPOILERS for Troubled Waters, the first book in this series, though you can read my review for that HERE if you'd like.

Frankly speaking, I didn't expect Royal Airs to be particularly memorable after Troubled Waters. I mean, how could I? It wouldn't have been fair of me to hold this sequel to the same standards I held its predecessor, not after absolutely loving the first novel in this series intensely.

It isn't that Shinn's Royal Airs is necessarily a bad book, but it just isn't a good one either. It picks up five years after Troubled Waters from the perspective of Josetta, Zoe's half-sister, who runs a shelter for the homeless in the slums of Welce. Once a princess, now merely an idol for the crown, Josetta has discovered her purpose outside of the palace. Corene, Zoe's step-daughter, however, hasn't been as lucky. Especially not with the influence of her scheming mother and former queen, Alys, hanging above her head. In an effort to escape Alys's latest husband, Corene runs to find Josetta in the slums of Welce, only to run into a gambler: Rafe. Not surprisingly, after becoming involved with Princess Corene and then Princess Josetta, Rafe unknowingly ties himself to the royal family. Before long, Rafe and Josetta have struck a tender friendship, the future of the crown is put to the test, and foreign dignitaries are arriving in Welce: again.

From the beginning itself, Rafe is singled out as unique; an individual who possesses no blessings. In Welce, the custom of having blessings chosen for you is regarded as an important ritual, but only ghost blessings are ever chosen for Rafe. Royal Airs is told in alternating perspectives from both Rafe and Josetta, but despite this intrusion into Rafe's mind, I found that his character quickly lost his original charm. When we first meet Rafe, he is an enigma. After all, who doesn't receive blessings? Instead of this seguing into an intriguing study of Rafe's unique personality, this tid-bit is merely used as a leveraging point to emphasize just how special Rafe is - a quality which winds up becoming conveniently important as the novel wears on. Without these interesting tags to pin upon him, though, Rafe is nothing special, as far as love interests go.

Josetta, too, doesn't fare much better. I enjoyed her narration, certainly, not to mention the close bonds she shares with Corene, Zoe, and Darien, but aspects of her voice fell flat. For one, I find it difficult to fully fathom that a Crown Princess could live and run a shelter in the slums with such ease. Even beyond the credibility of her back story, however, Josetta lacks the uncertainty and confusion that characterized Zoe during the beginning of Troubled Waters. With Royal Airs neither Josetta nor Rafe undergo any monumental amount of change or growth, which I found to be disappointing. If anything, their interactions are blessedly tame; complacent and dull. Where Zoe and Darien lit the page with their strong personalities, Josetta and Rafe undergo an extremely normal courtship. Admittedly, I enjoyed their slowly developing friendship, but it lacked the spark - the sizzling chemistry, if you will - that was distinct between Zoe and Darien. Royal Airs is, significantly, more romantic than Troubled Waters was and though I did not mind this in the least, I longed for the feeling of a deeper, simmering love than those of a quick, sweet infatuation. Shinn is, as always, a master at writing love stories - which remains true even in this installment - but I found myself distanced from this romance, unimpressed with the balance of character personalities, and ultimately disappointed that Josetta and Rafe lacked both the individual and coupled strength that Zoe and Darien were known for.

Royal Airs is slow to start, as I mentioned, but once it hits its stride, its quite the entertaining journey. While I found that the plot revolved a little too conveniently around Rafe and the unexpected plot twists he brought to the page, I absolutely loved the role that Corene and Darien played in this novel. More than Josetta, it is Corene who stands out in this sequel. Caught at a difficult time period in her life, feeling unwanted and confused, Corene is a mass of complex emotion - one I wanted to be involved in. I am certainly looking forward to getting to know her in the sequel, quite desperately, only because Corene is the strong, vivacious, and intricate heroine I look for in a novel. Josetta, in comparison, who is quietly fierce, is a character I love but one who makes for a poor protagonist due to the fact that much of her life is already figured out, orderly and neat. Nevertheless, main characters aside, the character who - yet again - stole the limelight (and my heart!) was Darien. In Royal Airs, Darien continues to play a large political role in the conduct and ruling of Welce, but he continues to surpass my wildest expectations. From the outside, Darien isn't an easy person to like, so seeing Rafe slowly gain respect for him over the course of the novel was an interesting relationship to watch unfold. Moreover, Darien's cleverness and loyalty are showcased so clearly in this installment, right alongside his flaws just as they were in Troubled Waters. Needless to say, it was more than just a little bit satisfactory to read about one of my favorite characters in all his complex glory. While I wished we could have had even just one teensy romantic gesture shared with Zoe, I have no complaints whatsoever when it comes to my favorite couple (or their adorably cute daughter)!

Unfortunately, however, Royal Airs remains a sore disappointment. Troubled Waters works perfectly as a stand-alone - and an absolutely brilliant novel - but I certainly wished for a slightly more enticing welcome back to Welce. Shinn's sequel is slow, riddled with characters who lack true conflicts and complex personalities, not to mention they are quick to be saddled with the role of the "Chosen One" archetype. While the overarching plot to this series remains intriguing and there is no doubt in my mind that I will be reading the sequel, perhaps with considerably less enthusiasm. (Unless, of course, Darien Serlast is in it... *sigh*)
Posted by Keertana at 12:00 AM