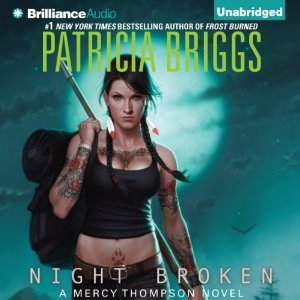 On Spoilers: While I reference objects or characters from previous installments in this series, there are no spoilers in terms of plot twists or reveals.

Frankly speaking, my enjoyment of Night Broken comes as a surprise. While I have thoroughly enjoyed the Mercy Thompson Series, from Moon Called to Frost Burned, the sudden arrival of Christy, Adam's ex-wife, threatened to ruin my all-time favorite Urban Fantasy Series for good. It happened with Magic Rises, the latest in the Kate Daniels Series which included a (rather unnecessary) jealousy factor into the romantic equation, presumably to fan its flame even later into the series. Jenn Bennett did it with Binding the Shadows, but ironically enough, her inclusion of an ex-wife only made the novel stronger, not weaker. Seeing as Mercy Thompson and Kate Daniels are far more closely aligned than Arcadia Bell, however, I expected the worst from Night Broken. Even the legions of reviewers who promised that Briggs had not compromised the relationship between Adam and Mercy in the least were unable to convince me to pick up my shiny pre-ordered hardcover.

It took the audio book, sitting brightly packaged when I opened the door to my library, to convince me to finally read the latest Mercy Thompson installment. Being a quick reader, audio books have always bugged me - ever-so-slightly - with their slow pace. Yet, the acclaim surrounding the Mercy Thompson audio books over the years have ignited my curiosity and, admittedly, though Night Broken was a novel whose (predicted) train wreck I wanted to fly through, what I truly needed was a slow, solid digestion of this tale. Lorelei King, the narrator of this audio book, effortlessly switched voices, enabling the world of Mercy Thompson to come to life through her voice, that despite feeling irritated by Christy's presence, I found myself creating mindless tasks for myself in order to keep returning to this audio book, to King's voice, and, even, to the story itself.

In this newest installment of the Mercy Thompson Series, Adam's ex-wife Christy has come to the Tri-Cities, seeking the protection of the pack in order to escape a dangerous stalker. With her husband's ex-wife in her home, re-creating the days prior to Mercy's initiation into the pack, it hasn't been the best of weeks for Mercy. Add to Christy's arrival the fact that the fae want the walking stick back - the walking stick which Mercy conveniently gave Coyote - and Mercy is once again racing against the clock, desperately trying to find a way to contact her father while keeping her family - and her sanity! - together.

Perhaps one of my favorite aspects of Night Broken is the fact that characters and minor details from past novels come together in this installment. Even if they are only mentioned in passing or feature a fraction of the screen time, the entire cast of the Mercy Thompson Universe truly does get a mention, at one point or another. Now, at the eight book in this series, the driving arc tying these books together isn't the romance or, even, the inner-growth that Mercy herself experiences. Instead, its focus has shifted to bigger themes such as family, friendships, and sacrifice, not to mention the larger political sphere of this world involving human and paranormal interactions. While aspects of this novel are trying - everything from the slow start to literally every word which falls out of Christy's mouth - it is a worthwhile installment to this series, continuing to take it towards the climax we have been anticipating from Briggs.

And yet, where Patricia Briggs outdoes herself is in the romantic department. We've seen Adam and Mercy share their fair amount of post-marital bliss. For the past two novels, they have presented a strong, united front as a couple and, even prior to that, their relationship has suffered only from internal issues, never external ones. With Chrisy pushing herself back into her old life - a life where she was Adam's wife, not Mercy - the potential to create a drama-filled love triangle is enormous. Yet, Briggs brings out the best in Mercy with Night Broken, molding her into a mature adult, one who picks her own battles and handles the presence of a rival in her household with poise. Though the pack is staunchly Team Christy, loving the chance to care for the helpless human woman, Adam's love for Mercy never wavers and he is constantly by her side. Even when Adam falls prey to Christy's charm, he is quick to catch himself and, surprisingly, the short romantic moments that Adam and Mercy share feel delightfully special, even after all this time.

Ultimately, I am ashamed to admit I underestimated the Mercy Thompson Series and, especially, Patricia Briggs. Night Broken may not be my favorite Mercy Thompson novel out there, but it's one of the better ones; truly. And, as always, I will be going back to re-read (or re-listen) to all my favorite Adam bits. After all, who can ever get enough of that man? ;)
Posted by Keertana at 12:00 AM