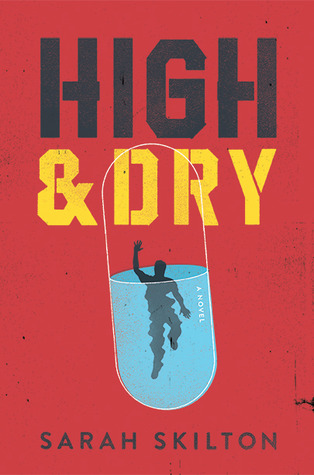 Following the success of her debut novel, Bruised, Sarah Skilton's sophomore effort, High and Dry left much to be desired. Quite simply put, High and Dry contains one too many plot threads to function efficiently as a cohesive novel. Where Bruised was direct, providing focused insight on the trauma surrounding a young teenage girl, High and Dry follows high school senior Charlie as he tries to win back his ex-girlfriend Ellie, help his other ex-girlfriend find her stolen flash drive, and thwart the authorities who insist on pegging him responsible for causing a classmate to overdose. Although aspects of High and Dry certainly shined, the overall effect of this story was not memorable...to say the least.

As she did with her debut, Skilton proves - once again - to be adept at navigating the tumultuous waters of the teenage mind. Writing from the perspective of a male narrator, she still manages to keep Charlie's voice realistic, witty, and engaging. It's incredible easy to become sucked into Charlie's tale - a definite plus point - and his inner struggles were perfectly portrayed. At the forefront of this novel is the fact that Charlie is still in love with his ex-girlfriend, Ellie, and he's quite sure she's still in love with him too. In the fall, however, Charlie will be attending a nearby university while Ellie is still uncertain about her future. Every moment of their relationship, then, is spent as a ticking time bomb with Charlie firmly believing that Ellie is too good for him and their relationship won't last. Ellie, unable to put up with Charlie's attitude, breaks it off with him only to find him following her diligently, desperately hoping she'll take him back. From my perspective, the entire romantic set-up of High and Dry is original. A male protagonist who feels grounded - anchored, if you will - by his girlfriend, but not to an obsessive or unhealthy extent. Charlie's own insecurities are put to rest due to the knowledge that Ellie picked him. Without Ellie, however, Charlie hardly knows who he is and finds himself struggling to reaffirm his own worth without her approval.

It makes for an intriguing dilemma, to be sure, but one that isn't expanded upon as much as it should be. I found myself wishing that Skilton had chosen to delve deeper into Charlie's psych opposed to his day-to-day actions and interactions; everything inside Charlie's head was far more compelling than anything out of it. Instead, the pace of High and Dry moves quickly, highlighting the multiple action-filled plot threads. While these aspects of the story do come together by the end - with a few surprising plot twists too! - I didn't feel entirely engaged or connected to the Charlie who went out of his way to track down a flash drive. Skilton expertly showcases the multiple facets of Charlie's personality through her complex plot and, by the end of this novel, his growth is truly admirable. Moreover, I absolutely love the slightly open conclusion to this stand-alone, tying together the loose pieces nicely while still leaving room - and hope! - for Charlie's future. Yet, my inability to become entrenched within the fast-moving pace of the bulk of this story made for slow and disappointing reading. While Skilton makes an important statement about teens during this transitional period between childhood (high school) and adulthood (college), High and Dry needed better execution - desperately. Although I certainly wouldn't dissuade readers from giving this one a shot, only because Sarah Skilton wrote it and her characterizations are spot-on, I'd encourage readers new to her work to pick up Bruised first. It doesn't disappoint in the least; trust me.
Posted by Keertana at 12:00 AM