ARC Review: The Art of Lainey by Paula Stokes 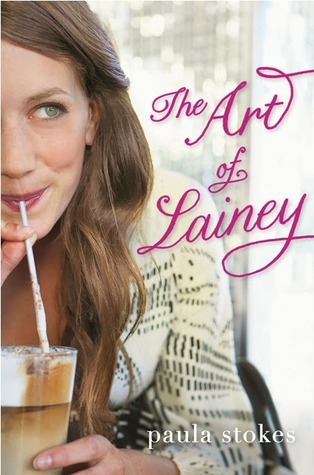 Title: The Art of Lainey

After varsity soccer play Lainey Mitchell gets dumped by her popular boyfriend, Jason, in front of her co-workers no less, Lainey resolves to get him back, no matter the cost. With the help of her best friend Bianca, the two scout the internet for tips - to no avail. The Art of War, however, an ancient Chinese text referred to when fighting battles, seems to perfectly suit their needs. And thus, Lainey launches an all-out war to win back her ex-boyfriend, employing Micah, one of her co-workers, to help her out. As Micah recently broke up with his girlfriend, the tattooed teen agrees to fake-date Lainey in an effort for them both to win back their respective significant others. As their charade heightens, however, Lainey begins to realize that she has always wanted may not necessarily be what she really needs...

The Art of Lainey, from the get-go itself, is a refreshingly feminist novel. Ever since Lainey fell into the popular crowd in high school, she has stopped being tomboy Lainey and started being the girlfriend of Jason, her best friend's older brother. In fact, the two have been dating for so long that Lainey can't even imagine life without him by her side. In short, from the time span between middle school and high school, Lainey has been living as Cinderella; the girl who went from nothing to something. After her unexpected break-up with Jason, however, Lainey is more concerned with facing her day-to-day life than her reputation. Like any teen, Lainey is loathe to embrace change and break-ups are difficult, drawn-out affairs that force individuals to realize that not only do they crave the simplicity of their lives prior to the break-up, but they also are simply unprepared for the possibilities that change brings. Instead of running back to Jason, though, or moping in silence, Lainey forces herself to get up, get out, and get her man.

While I'm not a fan of the fake boyfriend/girlfriend trope, I really appreciated the fact that Lainey is portrayed as an aggressive heroine. Not only is she extremely tall and muscular, to the point where she can be considered "buff", but her tumultuous feelings - anger, disappointment, shock, fear - are never suppressed. Instead, Stokes writes Lainey for the confused and complicated young woman she is and, by doing so, has unapologetically created the type of protagonist I scourge the pages of books trying to find. First and foremost, it is practically impossible to stick Lainey into any type of preconceived box. If we weren't given a description of her appearance, her narration would read just like any other popular student. Instead, however, her physical description forces her to stand out from the Mean Girl-esque Barbie dolls that plague our mind when we think of popularity in high school. Additionally, her close friendship with Bianca, a curvy young girl who has been Lainey's friend since childhood, is a far cry from the majority of childhood friendships which seem to fizzle out after high school is hit. Yet, perhaps most importantly, Lainey's aggressive stance regarding her boyfriend's behavior is never chided or looked down upon. In fact, everyone from her friends to her co-workers support her in her endeavor, despite its unconventionality. For me, the fact that Stokes gives her heroine free rein over her life, no matter the results or the morality of the situation or just the unprecedented nature of the event, is a large stepping stone in presenting a sensible, rational, but independent type of modern-day teenager.

Admittedly, Lainey's narration starts off rather shallow. After having been with only one clique for the majority of her teen years, she comes in with a slew of preconceived notions about Micah whose mohawk, tattoos, and jail sentences spell him out as the complete opposite of Jason. Gradually, though, as the story wears on, Lainey begins to change. Stokes times this impeccably, giving Lainey an ample amount of time to see the world around her in a new light, argue her own perspectives, and then come to understand and appreciate the views of others around her. In fact, the evolution of values that Lainey holds dear change so slowly that she herself doesn't even realize the extent to which she has altered as a person until she attempts to ingratiate herself back into her old lifestyle. As Lainey embarks on her "war" to win back Jason, though, she also allows herself to open up to new experiences she hadn't considered before and, as a result, is a far cry from the fearful teenager she starts out as, unwilling to let go of her past.

Micah, too, grows and changes from his friendship with Lainey, their relationship affecting them both in different ways. Once again, the build-up of emotion between these two is subtle and quite minimal, in fact, as they are both rather determined to win back their exes, but their relationship is a strong one precisely because they challenge one another. Instead of forcing Lainey to accept his lifestyle or vice versa, Lainey and Micah introduce each other to different aspects of their respective lives. And perhaps best of all, Micah isn't intimidated by Lainey, willing to dish it right back to her when she is too stubborn or simply acting too shallow to notice obvious facts staring her in the face. Thus, Stokes does away with so much unnecessary drama and angst, instead introducing both Lainey and Micah to an equal footing in their strange - and undefined - relationship.

What else does Stokes perfect? Friendships. I've already mentioned how Bianca and Lainey's continued support of one another from childhood to the teenage years isn't a relationship that is seen too often in Contemporary YA, but it truly only gets better from there. For one, Bianca and Lainey are already considering their future-lives after high school. Bianca, for instance, dreams of attending medical school while Lainey hopes to be scouted and later recruited to play soccer for the university she attends. It is all too common to hear of athletic guys contemplating their college choices or nerdy guys figuring out which Ivy League to attend, but the exploration of the college process for young females is sadly absent from literature (excluding the Dairy Queen Series, but then again, those books break a lot of classic molds). As such, the realistic conversations between these two were a pleasant surprise. Moreover, Bianca and Lainey have each others' backs in a way only true friends do. While Lainey often feels lonely because Bianca is busy and she no longer has a boyfriend to hang out with, I felt that the separation between these two girls was also a realistic issue, as is the strength of their friendship despite not spending every waking moment together.

The Art of Lainey combines a lot of classic elements - slow-burn/opposites attract romance, fake boyfriend/girlfriend trope, growth of a "popular" heroine - with a lot of not-so-classic ones such an aggressive heroine who isn't portrayed as bitter, strong sustainable friendships, and a love story whose foundation is based upon equality. And yet, it's the smaller instances that make this novel such a memorable one from the involvement of Lainey's parents in her life - minimal, but still there - to the three-dimensional quality of all the characters in this book, even Jason. Best of all, for me at least, is the fact that not all of Lainey's difficulties are solved in this volume. Granted, the main story line is satisfied, but niggling issues such as her friendship with Jason's sister or even Jason himself are kept unfinished. For me, this isn't so much a negligence of a plot thread but rather a subtle acknowledgement of the fact that relationships mend themselves and change over time. Just as Lainey's whirlwind romance with Jason was once a romantic tale, so is this one right now and perhaps a different one in the future, so these minor loose threads give this novel a sense of timelessness, not finality, which I appreciate. The Lainey we encounter by the end of this book isn't the same as the Lainey in the beginning and nor will she be the same as the Lainey ten, fifteen, or twenty years down the line.

It is for this reason, really - this subtle acknowledgement of time and growth and change - that The Art of Lainey is such an incredible novel. Not only is it realistic to a flaw, but it isn't afraid to portray teenage girls as complicated, emotional beings. While being a "teenage girl" always carries with it an unfortunate negative connotation, as does the statement "hell hath no fury like a woman scorned," Stokes combines both of these age-old adages and destroys them with her debut novel for Lainey is no weak, silly, or angsty teenage girl and neither is she an embittered and vengeful girlfriend. Instead, she is smart, talented, and best of all, determined. And it is Lainey's determination - her drive to achieve her goals, no matter the obstacles that stand in her way - that make this novel remarkable feminist, inspirational, and, truly, timeless.
Posted by Keertana at 12:00 AM