Review: House of Sand and Secrets by Cat Hellisen 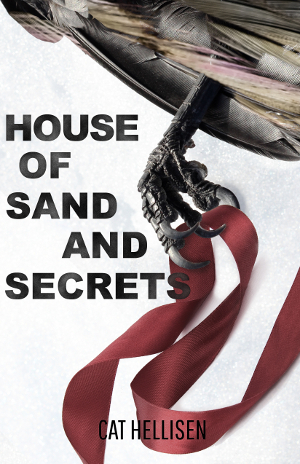 
This review is Spoiler Free for When the Sea is Rising Red, Book 1 of the Hobverse Series (My Review HERE)


It has always seemed, to me at any rate, that a novel is best as a stand-alone. Especially if it is part of a series. When each installment can remain strong on its own merit, while also building off of its predecessors to add depth and focus to characters we've already given our heart to, a story's full potential is reached. Urban Fantasy authors have seemed to master this trick early on, as has Cat Hellisen. While House of Sand and Secrets is a true sequel to When the Sea is Rising Red, enabling the pairing of these two books to blend together perfectly as a duet, it also stands alone, as Hellisen apparently intended for it to.The Hobverse novels are intended to be composed of a series of stand-alone companion novels. Nevertheless, I encourage readers to pick up When the Sea is Rising Red before reading House of Sand and Secrets, merely because the character development, an arc that ties together both these novels, is integral to understanding these complex individuals. When House of Sand and Secrets begins, Felicita is no longer in Pelimburg, the city of her birth. Now, having run away again, she finds herself thrown into yet another societal mess. Yet, this time, it may be more than just her life on the line. Felicita has done the unthinkable: married Jannik, a vampire. As the head of their household, a strange role-reversal from the norm, Felicita carries little influence among her male counterparts in respective Houses. Nevertheless, as lone vampires slowly begin to be killed off, one by one, and the movement to diminish the status of the vampires to mere animals takes off, Felicita is determined to ensure that no one underestimates her, least of all, herself.

Felicita and Jannik's marriage is, foremost, one of the strongest aspects of this novel. While there seems to be little love between the two, their union charged with heavy dislike and bitterness, it remains a complex three-dimensional relationship. For one, Jannik is Felicita's inferior, meant to be nothing more than a slave to her by societal standards. Only Felicita truly understands the intelligence and heart that lies beneath the cold exterior Jannik puts forth. Nevertheless, despite the fact that Felicita knows Jannik is her equal, her actions - quite unintentionally - do not always convey this fact. While I enjoyed Jannik's role in When the Sea is Rising Red, he remained ever-so-slightly aloof and detached from Felicita. In House of Sand and Secrets, we eventually peel back the layers to his complex personality and the man he keeps hidden inside is one I couldn't help but fall in love with. Felicita and Jannik's romance is a slow-burn, full of the torturous one-step-forward-two-steps-backward dance which I anticipate. Although their relationship is hurtful, from the barbs they throw at one another to the actions they commit, it is a realistic portrayal of messy, honest love at its best. Not everyone will love it - and it certainly isn't for those readers who love their romances tied up with a bow or need declarations of love to cement a relationship - but the words that go unsaid between these two are far more romantic than those that do. And, honestly, that's the type of romance I can swoon for.

While the secondary characters remained dark, complex, and strange in When the Sea is Rising Red, thrown into the equation between Felicita and Jannik in House of Sand and Secrets are Isidro and Harun. A vampire and a House Lammar, Isidro and Harun's relationship is similar to that shared between Felicita and Jannik. As such, their two Houses remain lone friends, isolated from the human partnerships shared within the other Houses. Isidro and Harun are key characters in House of Sand and Secrets, more so than the secondaries in When the Sea is Rising Red. I've come to love this pairing just as much as Felicita and Jannik, which speaks volumes about their development. Nevertheless, it isn't smooth sailing when it comes to these two pairs. Both Felicita and Harun are reluctant to forge a partnership, though the need for it becomes evident, and their interactions are far from friendly at first. Yet, the complexity of these friendships and the individual relationships intertwining between these pairs, only add to the excellence of this installment as a whole.

In a field dominated by alpha male heroes, Hellisen cleverly subverts this rather tiresome trope. Felicita, for instance, is superior by rank and birth than Jannik and, even when it comes to their relationship, she winds up taking the reigns. When it comes to Isidro and Harun, on the other hand, two males, Isidro comes across as the stronger of the pair, more decisive (and impulsive) in his thoughts. Although Isidro is a vampire slave, according to societal rules, his relationship with Harun remains equal regardless. Obviously, the main plot conflict in House of Sand and Secrets is the societal inequality present between the Houses and the vampires. Even beyond that, however, Hellisen explores the inequalities within House marriages as well, providing readers with a well-rounded image of her world. While there are plenty of sly political conversations to keep our minds occupied, there are just as many heart-pounding action sequences. Unlike its predecessor, House of Sand and Secrets flows as a much smoother story arc, developing a few main characters extremely well while simultaneously balancing a complicated plot line. Contrary to the occasional choppiness of narration I felt at times with When the Sea is Rising Red, Hellisen has improved as a writer with just this one volume.

Ultimately, this sequel is an extremely strong - and certainly better - novel than is typically expected of a second book. Although I do believe that Hellisen has two more novels in the works for the Hobverse Series (hopefully still following Felicita and Jannik!), this book can be read as both a stand-alone and the conclusion to an extremely satisfying duet. House of Sand and Secrets remains a character-driven tale and, unlike its predecessor, I'd argue that this installment definitely falls into the Adult genre. Its content is mature, dark, and often unsettling for its characters refuse to fall into simple black-and-white categories, but the novel is strengthened by these very same qualities. Felicita is a lively, feminist heroine, one who falters but continues to pick herself back up despite those mistakes. While the events of When the Sea is Rising Red do play an integral role in her growth, much of her maturity stems from a sense of self-realization as she begins to comprehend what she truly feels from what she thinks or has lead herself to feel. House of Sand and Secrets is one of those rare, vibrant novels whose characters will not leave me, despite the distance I place between myself and the story. It is deeply thought-provoking, movingly romantic, and heart-wrenchingly satisfying. A definite favorite of the year, this is one story I don't want to forget.


A huge thank you to Heather @ The Flyleaf Review for lending me a copy of this! :)
Posted by Keertana at 12:00 AM