Review: A Clash of Kings by George R. R. Martin 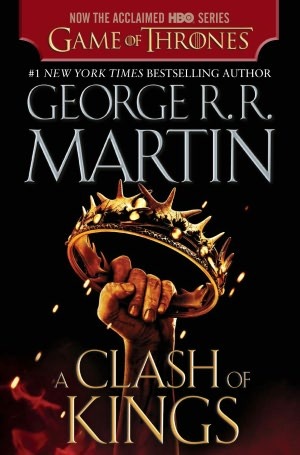 Note: This review does NOT contain any spoilers for the previous novel in this series but if you'd like to read my thoughts on Book 1, you can see them HERE.

Tyrion = Epic Genius of All Time

While his one-liners were the highlight of GoT, he basically stole the show in this book. And yes, I totally cheered for a Lannister... :P

It's the last third of this novel that has me thirsting for SoS. Not only was it fast-paced and full of unexpected plot twists, but it's made me anxious for the outcome these characters will face. Admittedly, I found a handful of narrative voices in this novel to be dragged out unnecessarily, but the political intrigue more than made up for that, as did the character growth and unique spins Martin puts on certain issues. Needless to say, I'm VERY curious to see how a lot of events are going to play out in the sequel. (Seriously, ALL the Stark children...just give them a break already, Martin!)

What  makes A Clash of Kings stand out, for me at least, however, is the sheer level of atmosphere Martin creates. Although there are multiple perspectives in this novel, all of them taking place in different locations throughout Westeros, they possess distinct voices. Moreover, these transitions are practically seamless as Martin manages to transport readers from the South all the way to North of the Wall without batting an eyelid or causing confusion. While this method of story-telling may seem to yield a detachment from the characters, it never detracts from the emotional ties Martin creates.

And yet, the best aspect of this novel lies in the individual challenges these characters face. All of them are distinctly different and although the magnitude of their difficulties may seem to vary, they are each large and forbidding to their respective character. Martin creates plot lines that not only serve to further his story, but also serve to challenge his characters in a manner that is unique to them. Moreover, he plays with the concept of power in more than just political, kingly ways, offering his characters moral choices that present a plethora of other dilemmas. Once again, it is this aspect of the series that, undoubtedly, makes it so famous and well-known. Martin takes risks, not only with his plot, but also in forcing his characters to transcend their barriers in realistic terms. Needless to say, I'm practically on pins and needles to find out what more he has in store for them.
Posted by Keertana at 12:00 AM