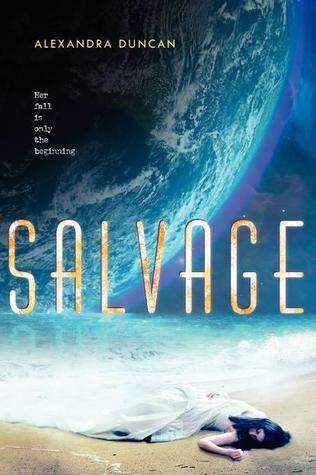 WARNING: THIS BOOK HAS A LOVE TRIANGLE!

I really wish someone had told me about that BEFORE I read it, or even better, requested it. Just MAYBE this would have been a good instance to include in the synopsis that there was a LOVE TRIANGLE present. If there's anything I hate more than a love triangle, it's an unexpected love triangle.

ANYWAY, getting past that LOVE TRIANGLE (*rages*) Salvage was only moderately decent. I might as well call myself a critic of science-fiction/fantasy because of how picky I am about the genres and Duncan's debut doesn't live up to the mark. Ava, our protagonist, starts her journey on the space ship where she lives in a dominant patriarchal society. So dominant, in fact, that the women are kept illiterate and expected to perform household duties. Futuristic? Um, try prehistoric. While I appreciated that this divide was starkly outlined, evident even in mythology that told of women misbehaving and causing disaster when given too much freedom, the feminist growth arc Ava undergoes after leaving her home behind left much to be desired.

On her home ship, Ava is told that she is to be a bride soon. Ava hopes - desperately - that it is Luck, the brother of her friend, Soli, who she has only met once. When they meet again, Ava and Luck's feelings for each other are strongly existent, despite the time they've spent apart. Unfortunately, however, a tragic series of accidents leads to Ava being thrown off her space ship and back down to a polluted, dying Earth. If you couldn't already tell from my description of Romance #1, it's little more than insta-love. Yet, Luck does see Ava as a woman capable of learning the tasks of men and Ava, after living a sheltered life submissive to men, is naturally drawn to Luck who sees her as more than a mere child-bearer. On Earth, however, Ava must attempt to survive and her primary objective to find her aunt who resides in Mumbai.

Once on Earth, the narrative of this novel drags, becoming increasingly boring. In fact, I am almost positive I spaced (no pun intended!) out on more than a few occasions. As such, I can only be 99.9% certain in my claim that the world-building on this futuristic Planet Earth is limited. While the evidence of its decline is glaringly obvious, I remain puzzled about the nascence of the communities aboard space ships, not to mention why there is such a large population still on Earth when they could be living in space. Moreover, what made the communities aboard these space ships believe that they needed to go backwards in time after making so much modern-day progress in the women's movement? I wish Duncan had spent more time exploring these corrupt politics aboard these ships instead of focusing on the romance story line. After Amy Kathleen Ryan's Sky Chasers Trilogy, I've realized that the scope to be explored aboard a space ship is far more than most authors would lead their readers to be believe and, on that front, I was disappointed by Salvage.

Nevertheless, on Earth Ava does come to recognize the inconsistencies with her previous life. While her transition into a bad-ass feminist is rushed, it is still present which is a relief. Ava forges many strong bonds with characters she meets on her journey to find her aunt in Mumbai, but I wish those secondary characters could have come into their own a little more instead of the focus remaining solely on Ava's characterization. Once in Mumbai, though, my issues began to arise with Duncan's setting itself. I've been to Mumbai and though the landmarks mentioned are accurate, as are the mention of elephants, I found that the rich atmosphere of Indian culture that pervades every part of India to be missing. In The Lost Girl, Sangu Mandanna does a brilliant job of capturing the essence of Bangalore, the city where part of her novel takes place. Sadly, the essence of Mumbai isn't portrayed the way I'd have liked it to be in Salvage and instead of connecting to a setting I'd been to, I felt distanced from it instead. (Of course, this is a personal qualm I have as I've been to India many times, so I'm sure most readers will not struggle with this.)

Of course, Mumbai brings us to Love Interest #2 and, honestly, I just did not see this coming. I don't know why. I figured that since this novel is a stand-alone and Ava was so hung up on Luck throughout the novel, there couldn't be anyone else for her. WRONG. I saw Love Interest #2 as a genuinely sweet FRIEND to Ava, so to find that this character was actually a love interest in disguise shocked me. It's a sweet romance, but one I found rather unnecessary to the plot line as it is given such minimal screen time. Instead, it is the friendship that is developed well and I wish this novel could have remained that way. Not because I'm Team Luck, but because I'm Team Ava. I enjoyed the conclusive ending of this novel, though, and am thankful the love triangle is wrapped up quite neatly and very tastefully, actually empowering Ava.

Ultimately, though, Salvage is a character-driven novel where I didn't feel much for the characters. I love the world Duncan has created and I wish she had spent more time detailing this universe to the reader and exploring intriguing plot devices within the different nooks and crannies of her richly imagined future. Instead, I found myself flipping these pages rather dully, looking up with excitement from time to time but mostly reading this as a disengaged individual. Salvage isn't a spectacular debut and for fans of science-fiction, I wouldn't recommend this. On the other hand, though, if you're just looking for an innovative new read, this novel does the trick.
Posted by Keertana at 12:00 AM