Review: A Visit from the Goon Squad by Jennifer Egan 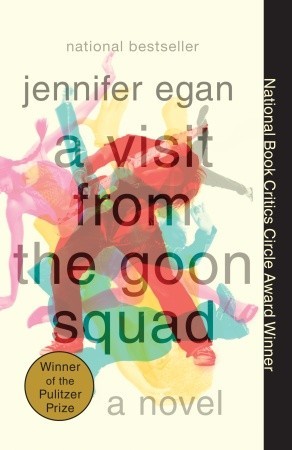 Title: A Visit from the Goon Squad

A Visit from the Goon Squad is like reading the first novel in a companion book series. We read about the protagonists, but also about the secondary characters. In fact, our connection to them whets our appetite to read about them as protagonists in their own right in the impending sequel. But imagine reading about those same characters from the angle of a different narrator. And another one, now from a different time period. Just try to picture following a series of characters, all loosely connected, but through the eyes of different narrators who hail from different time periods, continents, and backgrounds.

In a nutshell, that’s A Visit from the Good Squad. Egan follows the tale of Bennie, an old man who once used to discover the best bands and help them hit big. Using multiple perspectives, narrative voices, and time periods, Egan steadily builds a picture of Bennie from his adolescent years to his stardom and beyond. It isn’t solely a novel centered around Bennie, however. It’s about the lives of the people Bennie has touched, whether it be before or after their interaction with him. And the lives of the people those people in turn have affected.

Egan is a definite Pulitzer Prize winner due to her ability to spin such a tight, complex tale in a convoluted manner. A Visit from the Goon Squad never lags in pacing, but Egan’s creativity oozes out the pages, falling just under overwhelming. Jumping from first person to third, second person to distant futures we have yet to experience, even entire chapters told through newspaper articles or a PowerPoint presentation, Egan is a masterful storyteller.

Yet, the reason this novel is so worthy of its accolades and its 5-Star rating is for the raw emotion Egan is able to capture in just a few pages. Every chapter is a short story in and of itself, though they all connect to create a beautiful novel. While we never re-visit a narrator, we manage to grow attached to them in the short span we spend in their heads and grow ever-more anxious and curious to hear about them, even in passing, during other chapters. Although this method could have been used to wring out frustrating emotions, Egan writes tactfully, pulling us into her tale emotionally but enabling us to enjoy the journey she forces us on without becoming too messily involved.

Ultimately, Egan manages to re-create so many small, seemingly unimportant facets of life which hold greater meanings. By the end, it is breath-taking to see all of the minuscule details come together with spellbinding ease. Egan’s writing is effortless, flowing from one page to the next timelessly. While I cannot claim that A Visit from the Goon Squad changed my life, it did garner a greater appreciation for the art of writing. And, most importantly, like a picture, it spoke a thousand words without uttering a sound.
Posted by Keertana at 12:00 AM