ARC Review: A Crown of Bitter Orange by Laura Florand 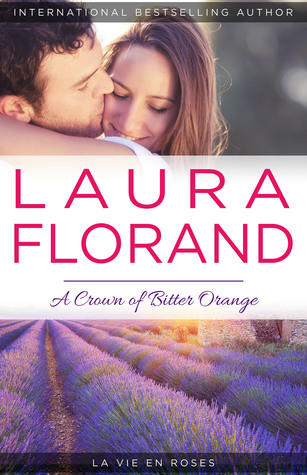 NOTE: This review is spoiler-free for the entire La Vie en Roses series. Every book can be read as a stand-alone and are simply companion novels to each other, i.e., previous characters/couples return briefly. You can read my review of Once Upon a Rose and my review of A Wish Upon Jasmine, the two previous novels in this series, as well as my reviews of Florand's previous series, Chocolat et Amour (#1, 2, 4, 5, 5.5, 6, 6.5, 7), and Paris Nights.

Laura Florand writes magic. I adore her prose and A Crown of Bitter Orange, for a fan like me, does not disappoint in the least. Her latest follows Tristan, the youngest Rosier cousin, and his high school crush, Malorie Monsard. The Monsards have long been enemies of the Rosiers due to a series of actions during WWII, but Tristan has never let that be a deterrent to his affection. When Malorie returns to Grasse to re-open her family business, Tristan sneaks in his chance to win her over...finally.

All of Florand's romances are careful character studies. While their tone shifts--playful, serious, romantic, heart-breaking, etc.--her characters never lose their wonderful charm. These are full-bodied humans that seem to step off the page, so very real with their flaws and their insecurities. I love how seamlessly Florand switches third-person perspectives so that a situation which seems impossible from one character's perspective, suddenly makes sense as we more fully understand each character and their relationship dynamic.

Tristan and Malorie have known each other for so long, but the narrative is never bogged down by annoying flashbacks, which I appreciate. We really get to know these two as they are, now, the qualities that have changed since high school and those which have only intensified since then. Malorie, for one, is among my favorite Florand heroines. Her family history is one she is deeply embarrassed by and she has worked hard to not let that deter her in any way, despite the emotional scars that the men in her life--namely her father and grandfather--have left behind. I really enjoyed the strong woman-power element that her narrative brought because Malorie is, truly, a matriarch and looks up to other successful women as her inspiration.

In fact, her relationship with Tristan--despite his patriarchal upbringing--is an extremely even-footed dynamic and I really enjoyed that tropes we often see associated with women in romances, like insecurities and shyness were actually present in Tristan, instead. He's a sensitive soul, and what's more, he isn't afraid to show that to Malorie. He genuinely cares for her and his ever-upbeat nature made this a delight to read as he wasn't worried about his fragile masculinity except in front of his cousin brothers. And, that's something else I love about this series--male friendships! These are so, so rare and I really like seeing another side to all of these men as they relax and become themselves around their family members.

While the women in this particular series are all alone, seeking a place to belong, which is a trope I don't always love, Florand makes it work since her relationships have this wonderful push-and-pull as the two characters attempt to find their footing and establish an equilibrium. A few things about this latest narrative that did grate on me a little, though, were the constant "vetting" of Malorie by just about every member of Tristan's family--his aunt, his cousin, his grandfather, his mother--and I felt as if some of these conversations became repetitive. Another thing that became repetitive were the constant allusions to the "big drama" of the story--the fact that would cause Tristan and Malorie to briefly break-up before all was patched up again. But, these are minor quibbles to have with this novel, utterly remarkable and charming in every other way. Florand keeps outdoing herself with each new installment in this series and I am so excited to see what's next! (Although, please, can we either have some diversity in this series or a homosexual romance? I would LOVE to see that--a very pleasant change to the South of France heteronormal lifestyle!)
Posted by Keertana at 12:00 AM