I started reading Laura Florand's Amour et Chocolat Series awhile back, but I keep coming back for more, unable to get enough of Florand's writing or characters. (And, if we're being honest, the dream of going to Paris and meeting one of these tasty hunks is the only reason I still sit through my dreary French classes!) Quite simply put, they are far more than their chick-lit covers suggest they are and if you're a fan of strong characterization with smoldering romance, Florand never disappoints. I'm thrilled to have her on the blog today to talk about her latest book in the series - and possibly the best one yet. Dominique Richard's reputation says it all--wild past, wilder flavors, black leather and smoldering heat. Jaime Corey is hardly the first woman to be drawn to all that dark, delicious danger. Sitting in Dom's opulent chocolaterie in Paris day after day, she lets his decadent creations restore her weary body and spirit, understanding that the man himself is entirely beyond her grasp.Until he touches her. . .Chocolate, Dominique understands--from the biting tang of lime-caramel to the most complex infusions of jasmine, lemon-thyme, and cayenne. But this shy, freckled American who sits alone in his salon, quietly sampling his exquisite confections as if she can't get enough of them--enough of him--is something else. She has secrets too, he can tell. Of course if she really knew him, she would run.Yet once you have spotted your heart's true craving, simply looking is no longer enough. ..

I love my literary allusions. The Chocolate Kiss is rife with fairy-tale motifs. The Chocolate Rose uses the Beauty and the Beast theme, one I love. All’s Fair in Love and Chocolate (the novella in Kiss the Bride) is full of little Superman jokes, although no one ever catches them, alas. Turning Up the Heat is infused with O. Henry’s “Gift of the Magi”. Coming up this fall, I have a novella Snow-Kissed that works with the Snow-Queen story and the novel The Chocolate Heart, which plays with the Persephone myth, and A Rose in Winter (in the collection No Place Like Home) that plays with Little Red Riding-hood.

But The Chocolate Touch has none of those. I almost feel that these two characters and their setting are, by themselves, their own magic. It is, in its way, a very straightforward story. I was doing research in a real chocolaterie in Paris (Jacques Genin’s place off République), when I began to have this increasingly powerful vision of a woman sitting in a salon very like Monsieur Genin’s real one, and of a chocolatier hero who was growing increasingly fascinated by her. And this became Dom and Jaime’s story. Dominique Richard is the top rival of Sylvain Marquis in The Chocolate Thief and Jaime Corey is Chocolate Thief heroine Cade’s rebel younger sister. So you see that Dom and Jaime have some interesting relations with whom they have to deal—Sylvain is not at all happy about having his fiancée’s sister get involved with Dom, for example. Nor is anyone else in Jaime’s family.

These secondary characters and their very strong opinions are part of the baggage that Jaime and Dom carry, and yet the story is not really about these secondary characters. It is all about them. They were just so powerful and I loved them so much that the story almost wrote itself. I couldn’t wait to write the next scene, to see what these two would say and do with each other next, as they grew into each other and in doing so grew into themselves.

I think of my stories often afterward in tones. From my point of view, The Chocolate Kiss, for example, is zinging with energy, often conflictual, in a fairy-tale setting. The Chocolate Rose has this bright, expansive, sun-filled joyousness to it, like its hero and its Provençal setting. The upcoming Chocolate Heart is dark and angsty. But this story, The Chocolate Touch, is the one I think of as the sweet one, the tender, emotional one.

And that may be why I love this couple so much. They make me feel tender toward them. I love their courage and gentleness with each other. And I feel a little protective of them as I offer them to you, because I do hope you love them, too.

I’ll leave you with a little glimpse of Jacques Genin’s salon, that helped inspire the setting for this particular story. 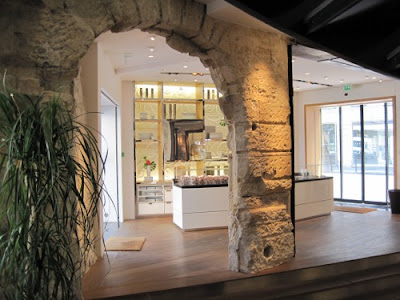 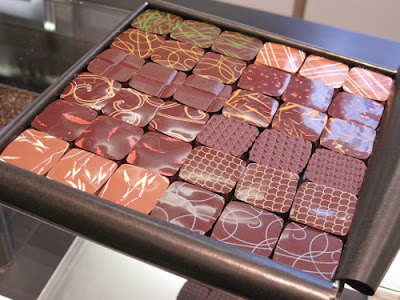 Have you been to Paris? Are there any little spots there that you particularly remember as magical or that have inspired you? Or are there any places you dream of visiting?

Coming up with my most recent 3 Book Crushes was very hard, because I have been on quite the lucky reading spree the past few weeks and have been discovering so many great books and great authors. I finally decided that I would quite literally have to make it the “most recent”, and so, in reverse order, I name below the three most recent books I have read that made me say, “Wow!” Two of them are only 0.99 right now so—go grab them!

Making It Last, by Ruthie Knox. This is a very similar concept to my own novella Turning Up the Heat (a married couple that needs to reaffirm and renegotiate their commitment to each other and who they are in their marriage). So when I heard Ruthie was doing a story along these lines, I was dying to see what an author with such a different, strong voice would do with the idea. And it is such a sweet, vivid, sad, optimistic, powerful story! Real but romantic and full of heart. I loved it and highly recommend it.

Confidence Tricks, by Tamara Morgan. Author Elyssa Patrick had invited me to participate in an anthology that included her and Tamara, which of course got me curious about this author. And when I saw “playboy thief” and “expert con woman who can beat him up”, well, it was all over for me. I love a good thief caper! And this one was hilarious. I dare anyone to read the first chapter, with our hero Asprey on the ground with the heroine’s stiletto at his throat, and not fall in love with him. And her! I could not stop laughing throughout this book, and yet at the same time, it’s a very intelligent story with a lot of heart. The hero and heroine are both priceless.

It’s been a summer of great reads, so I could keep going (Virginia Kantra’s Carolina Girl, Theresa Romain’s Season for Scandal, Jeannie Lin’s Sword Dancer, Donna Kauffman’s Honey Pie, Eloisa James’s Once Upon a Tower...), but you told me to pick the most recent three!

Admit it: you really, really want to go to that salon and eat some of that chocolate right now. I certainly want to! I absolutely love this series and cannot recommend it enough. I love how Laura describes this book - it really is spot-on - and I'm looking forward to trying the books she recommended. I haven't heard of any of them, which is both strange and exciting! Thank you so much for stopping by, Laura! :)
Posted by Keertana at 12:00 AM