I AM ALIVE! I went to India for two weeks in December, returned in January and then went to Seattle for four days and have been in California for the past week or so, touring with my choir. Needless to say, I haven't had a chance to blog in a really long time--sorry!--but here's a quick re-cap (with pictures!) of my past two months!


3 Things About My Life These Months 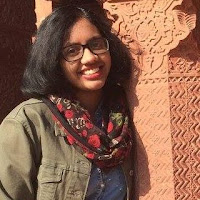 1. I went to India! So I usually go to South India to visit both my sets of grandparents but this time I went to North India essentially as a tourist. I went to Delhi, the capital, Agra, home to the Taj Mahal, and Jaipur. Delhi and Agra are surrounded by Mughal architecture while Jaipur possesses remnants of Hindu kingdoms so the contrast was fascinating, from a historical perspective. It's also so different to live in these cities and see constant reminders of the rich history of India, both its past and its colonial background. These are ruins that don't exist at all in South India so I really, really enjoyed this trip. The weather was beautiful and the food was AMAZING. I easily gained twenty pounds but I don't even care because, let's be real, Indian cuisine is the best. 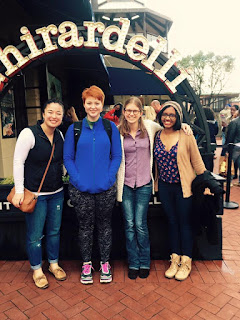 2. I went to Seattle! Admittedly, I was realllyyyy jet-lagged in Seattle but it wound up being a ton of fun because I was reunited with my friends from this past summer at my internship and we attended the Joint Math Meeting conference together. I presented my research on Saturday, the 9th, so it was just an incredible opportunity.

3. I went to California! Choir Tour is essentially a week where you eat, breathe, sit, and sleep with fifty other girls. You're with them constantly and it's such an incredible bonding experience. Last year we went to South Korea over Spring Break which was amazing because it was a foreign country but California is much more familiar and so the experiences were made incredible by the people. I really became close with so many members of the choir that I didn't know too well before and though we had to re-route our flight to avoid Juno, or Snowzilla, Boston is pristine and snowy but not too bad. :)


Best Book I Read This Month


I read a looot of amazing novels this month so I'd have to say it's a tie between Gayle Forman's I Was Here, which I know wasn't popular with quite too many people, and a recent romance read that's been all over my newsfeed, Act Like It by Lucy Parker. I also read Fool Me Twice by Meredith Duran and Brown-Eyed Girl by Lisa Kleypas and adored those two as well so look out for these reviews in the immediate future!


This is SO hard because I'm not looking forward to classes, Valentine's Day, or the snow that is usually headed our way in February. But, I'll be positive so...

1. Working Out! I'm finishing up my PE requirement this semester with badminton and I'm excited to get in shape and work out, despite the snow on the ground. I always feel so good when I'm working out and generally being healthy and strong but it can be really hard to motivate myself to go out when it's so cold so I'm looking forward to my class mostly because it means I'll already be at the gym and can do the work outs I want to do after badminton practice.

2. Choir! My choir is performing at ACDA so I'm excited to spend more time with them and really perfect the music we've been performing on tour for this competition. Plus, like I said, we're all so bonded now that spending time together is absolutely ideal! ;)

3. Reading! I genuinely want to spend more time reading this school year and I have a ton of books I'm really excited about so I'm hoping to be able to actually make time for them. I think I'll have a liiiitle more time since my extra-curriculars aren't nearly so time-consuming this semester and I won't be continuing my research from the summer anymore, so that should for sure clear up a few hours of time to really focus on ME. My health, both mentally and physically, because self-care is NOT selfish.


How was your Holiday Season? Any resolutions for the New Year? Did you do any travelling? Do you have exciting plans for the month of February? I want to hear about everything so let me know in the comments!(:
Posted by Keertana at 12:00 AM 12 comments:

Review: I Was Here by Gayle Forman

Title: I Was Here

I didn't expect to love I Was Here. Not only did it receive little publicity following the social media storm of Just One Day/Just One Year, but it further disappointed many longtime fans of Gayle Forman. Thus, I didn't even bother to pick it up when it released and the pretty hardcover has been resting on my shelves, collecting dust. But, the best part about traveling--especially in a country where you have no cell service and the WiFi is spotty--is that you wind up picking up the many discarded novels thrown into your suitcase.

I Was Here often doesn't feel as if it was written by Gayle Forman. While she has written dark, gritty novels that touch upon serious issues before, they have never been quite in this vein. Cody, our heroine, is bitter, caustic, and deeply confused. Meg, her best friend, has just committed suicide by swallowing poison and she cannot help but feel guilty. While the two were inseparable for much of their lives, Meg's acceptance and scholarship to a prestigious academy took her away from the small town where Cody is still stuck. While Cody is proud of Meg and so, so happy for her, she cannot help but resent her life while she cleans homes and lives with Tricia, the mother who has never wanted her. Cody was more-or-less brought up by Meg's family, the Garcia's, and with Meg away at college, living a life that Cody barely knows about, the distance between them only grows.

So when Meg kills herself, Cody is entirely blindsided. Why would Meg, who is a shining star, a fixer, a ray of sunshine, decide that ending her life was the only way to end her pain? Why was she even in so much pain? Cody, desperately seeking answers, hacks into an encrypted file on Meg's computer and her discovery pushes her to question everything she knew about her friend, about grief, and especially about death. I Was Here is not an easy book to read. It's extremely dark and deeply unsettling in a way only few things are but it's also thought-provoking and beautifully written.

Cody is the type of unlikeable protagonist I adore--one whose flaws and fears hit close to home but in a believable manner. In the Cody/Meg dynamic, I'm the one who got away--the one who left my best friends in my small town to attend a prestigious academy near a sprawling city. So the distance that Cody experiences and the new adventures that Meg has which Cody doesn't know about--I can relate. I think all college students can. In some ways, that makes this story even harder to read but I loved Cody more for her resentment and love, mixed together into a ball of emotion that only Meg could unravel. But Meg wasn't there.

Cody's emotional arc is so well-written, both in terms of her acceptance of Meg's suicide and her relationships with Tricia, her mother who seems not to care for her, and Meg's family, Sue and Joe and their ten-year-old son. I further loved the smaller arcs--the relationship between Cody and her local librarian, the way we learn about Cody through Meg's eyes, Cody's odd relationship with Meg's roommates--and especially the way all of these small interactions come together to help Cody on her path to healing. Like I said, it's a hard book to read and was slow-going for me, as a result. Even with the mystery aspect, there's an underlying sense of dread throughout the story, simply because it's so difficult to talk about suicide and suicidal thoughts. Going into that dark place is terrifying. But I have so much respect for Gayle Forman for de-stigmatizing not just mental illness, but the thoughts that inspire actions such as suicide.

Of course, there is a romance. I'm in the minority here, I know, but I loved it. It's uncomfortable because Ben and Meg knew each other--well--before Cody even came into the picture but the awkward moments are what I love about this couple. I'll admit that we don't get to see the full arc of "bad boy" Ben's reformation following his encounter with Cody, so the impact they have on one another seems unexpectedly deep, extraordinarily fast. But Gayle Forman is among the few authors who can make me believe in an instant connection between two people--somewhere between love at first sight and attraction--and for me, it worked. It helped that Ben was flawed, that he had a past which was equal parts happy and sad, that he understood Cody and respected her wishes. It also helped, I might add, that he had blue, blue eyes. I'm a sucker for blue eyes.

I Was Here is not my favorite of Forman's novels--that distinction belongs to Where She Went or Just One Year--I haven't quite figured it out--but it's still an excellent addition to the New Adult genre. It is, above all, an introspective read and I'd suggest waiting to read it at the right time. I didn't think I could wait nearly a year to read a new Gayle Forman release but there's something to be said about reading the right book at the exact right time. While I Was Here hasn't received the accolades of Forman's predecessors, I still believe it to be just as worthy of praise, if not at least one thoughtful read.
Posted by Keertana at 12:00 AM 6 comments:

I usually struggle to pick five or ten but this year, I had nine favorite novels and it was a no-brainer that these would be my top five. I guess I get pickier and pickier every year but I recommend these whole-heartedly so if you haven't read them, get your hands on them NOW. What are your favorite books of the year? What should I have on this list that I don't? Let me know in the comments below--I'm always looking out for new recommendations!
Posted by Keertana at 12:00 AM 12 comments: