Review: Maybe in Another Life by Taylor Jenkins Reid 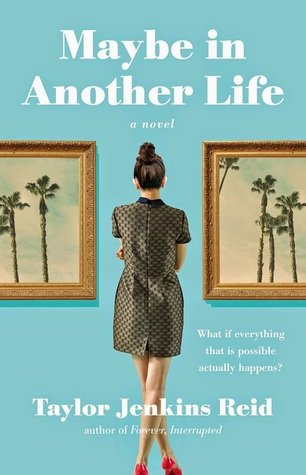 Title: Maybe in Another Life

I nearly wrote off Taylor Jenkins Reid after reading her latest, the extremely acclaimed One True Loves. While the novel itself left a sour taste in my mouth, Reid's prose proved to be unforgettable. And I'm so glad I gave her another chance.

Maybe in Another Life is everything I wanted One True Loves to be--and so much more. Hannah Martin is at the stage at her life, twenty-nine, when everything has fallen apart instead of come together. She's spent her life moving from city to city, unable to find a place or vocation that calls to her, and after sleeping with a married man, she slinks back to Los Angeles, her hometown, to live with her best friend, Gabby. Gabby is more family to Hannah than her own parents or ballet prodigy sister, who all reside in London, are. When her parents moved, Hannah stayed with Gabby and her family and, ever since, she's been on her own, hopping around the world without a care in the world. But Hannah wants to change. She's shaken after her affair and envious of Gabby, who lives in marital bliss with a successful career. When Gabby throws her a party to welcome her home, Hannah is faced with an important choice: stay at the party with Ethan, her high school boyfriend, and see where the future takes her? Or go home with Gabby instead of jumping into--yet again--another relationship?

Every chapter alternates between two versions of Hannah's life--the first, where she goes home with Gabby, and the second, where she stays with Ethan. As a fan of the multiverse theory and a math major who is more than a little obsessed with the concept of infinity, I was skeptical if Reid could pull this off. But, what I appreciated about this novel, is that Reid leaves the science behind. In fact, she doesn't even mention it until the last chapter. Instead, this story focuses on how similar, and how different, these two versions of Hannah's life are. Many aspects to her life remain the same, regardless of the choices she makes--such as her friendship with Gabby, the support she receives from Gabby's parents, the manner in which her relationship with her own parents develop--but other, huge aspects of her life, are drastically different.

For me, the strength of this novel--and the reason why you should read it--lies in the honest, emotional friendship at its core. Gabby is Hannah's rock, and vice versa. Both of their lives go through upheavals, in both versions of Hannah's life, and though the timing and circumstances change, their love for another doesn't. I'm a huge proponent of female friendships and, frankly, this was the component that was really missing for me in One True Loves. In Maybe Another Life, though, Reid not only nails this relationship, but she also perfectly captures Hannah's inner struggles and motivations. This is very much a coming of age novel and Hannah's musings and thoughts as she tries to become a person she can be proud of are inspiring and wonderful to read about. She's a solid decade older than I am, but I could relate to her completely, regardless, and I loved that timeless quality to her voice.

Of course, there is a romance in this novel. I don't want to say more about it than what you already know from the synopsis, but let me say that the romances will surprise you. I think it's interesting, how the choices Hannah made affected her, physically, but also emotionally, into making her an inherently slightly different person in each version of her life. And the romances are catered to those versions of Hannah and I loved how personable and authentic they felt, in both parallel universes. Of course, I preferred one of Hannah's futures to the other, but it's honestly so hard to choose--both of these futures offer so much to her, but at a steep cost.

Ultimately, this book was such a wonderful, unexpected surprise. I loved it, from beginning to end, and found myself reflecting on this story long after the pages were closed. I so rarely have such polar reactions to an author's novels but if you have yet to pick up a Reid book, start with this. It makes me want to read her entire backlog and forget about One True Loves entirely.
Posted by Keertana at 12:00 PM