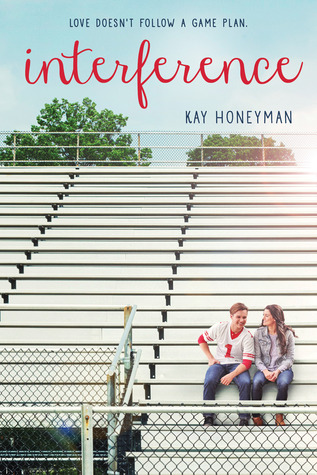 Even though it was released three years ago, Kay Honeyman's The Fire Horse Girl remains among the best debut novels I have read. Needless to say, I was fangirling all over the internet when I found out about Honeyman's sophomore novel, Interference, and she was sweet enough to send me an advanced copy. Where Honeyman's debut was a burst of diversity, color, and flair, her sophomore novel is an intelligent, wonderfully crafted modern-day re-telling of Jane Austen's Emma. It's a loose re-telling, omitting a handful of characters that we know and love to develop other relationships that weren't as prominent in the original, but unsurprisingly, they work, especially for YA.

Our heroine, Kate, is the type of headstrong, no-nonsense protagonist I wanted to be in high school. She stands up for what is right, even when the system privileges her, and she doesn't allow herself to be cowed, beaten, or taken advantage of--in other words, she's exactly who and what I'd envision Emma to be if she lived in modern-day society. Kate is the daughter of a politician and after she finds her boyfriend cheating on her in D.C. (not to mention posting photos of her online that undermine her relationship with her parents and specifically her father's campaigns), she finds herself in a small town in Texas where football reigns supreme and everyone knows everyone else. I'm the type of person who resists change at all costs, which is why I admired Kate so much, even from the beginning. Although she believes she's the reason for her family moving away from D.C., she makes the best of her situation and resolves to be better, work harder, and get the recommendation letter she so desperately wants for art school.

Honeyman ticks off so many boxes in her characterization of Kate. Here is a heroine who is confident--why is this so rare among YA protagonists??--and, what's more, she has passions that define her and is constantly pushing herself to discover more. Kate falters and make mistakes--so many mistakes!--but she always picks herself back up, owns up to her faults, and tries to make amends. I loved the way in which she kept in touch with her best friend from D.C. while also making new friendships and ingratiating herself into Texas life. Kate's life is so realistic and balanced, from her rocky relationship with her father to her tentative new friendship with Ana to her casual conversation with her former best friend Tasha and especially to her respect for her yearbook photography teacher who inspires her to be better. I find that adult role models are usually absent from the lives of so many fictional teenagers and this just breaks my heart because teachers, professors, coaches, etc. have always played such a huge role, not only in my life but in the lives of so many of my friends. It's refreshing to see Kate similarly affected by a teacher, especially since her relationship with this teacher starts out as disdain--since Kate can't see how a teacher in charge of the yearbook club could improve her photography--and shifts into awe and admiration.

While Kate is the star of this novel, and rightly so, I found myself charmed by Hunter, Ana, and a whole host of secondary characters from Kate's father's new campaign manager to her aunt who grudgingly allows her to volunteer at her animal shelter. Ana, the "Harriet" of Interference, is kind and talented, the type of photographer Kate aspires to become. It's an interesting take on their relationship because unlike in Emma, Kate doesn't hold all the cards, here. There's is a give-and-take, with Ana helping Kate assimilate and improving her photography while Kate tries to instill more confidence in Ana. Hunter, too, is a surprise from the "Mr. Knightley" we may all expect. For one, he hasn't known Kate all her life, so while that familiarity takes awhile to build, the growth and change in their relationship is fascinating to watch. Hunter is serious and steady, always looking out for Kate in the best of ways, but he's also still a teenager with his own problems and prickly nature to boot. I enjoyed his and Kate's interactions, from their banter to their genuine apologies, and I only wish we got to see more of them as a couple.

Honeyman excels at creating the atmosphere of this small Texan town, from its focus on football to the warmth and intimate understanding that they all have of one another. The politics, too, plays a large role in the plot of this story as Kate's father campaigns for a seat that has been held in his family for generations and Kate, as the politician's daughter, gets sucked in. Where this story differs from other political novels like The Wrong Side of Right is in that Kate has been on the campaign trail her whole life. She knows this drill like the back of her hand and she also knows the consequences of missing up and how to spin the story so that she comes out the victor--in other words, Kate knows how to win. I loved seeing how her father's political anecdotes made their way into her day-to-day life and thinking. Moreover, I really enjoyed her relationship with her father and the steady, but mature, manner in which she gains back his trust.

Interference is such a delight: a capable, imperfect heroine against a backdrop of politics as she learns to navigate her own aspirations alongside those of her father's. While I will say that I missed the presence of Kate's mother in this novel, sorely, for she seems to be nothing more than a prop for her father, and I also wanted more of Hunter's mother, whose storyline I don't feel as if I got enough of, Honeyman's sophomore novel is a definite hit and a very successful re-telling of Emma. It's certainly up there with "Emma Approved," the YouTube modern adaptation that I love. While Honeyman strays from the original plot quite a bit more, the main elements are all there, as is the heart of this tale. Emma isn't a character most readers love, at first, and I think that may translate to Kate, as well, but she's a heroine I want to emulate--her confidence, her bravery, and her stubborn will to never give up. If nothing else, she's the type of protagonist I want more teenage girls to read about because, maybe then, they won't be so afraid to be confident, own their personalities, or shy away from their intelligence.
Posted by Keertana at 12:00 AM