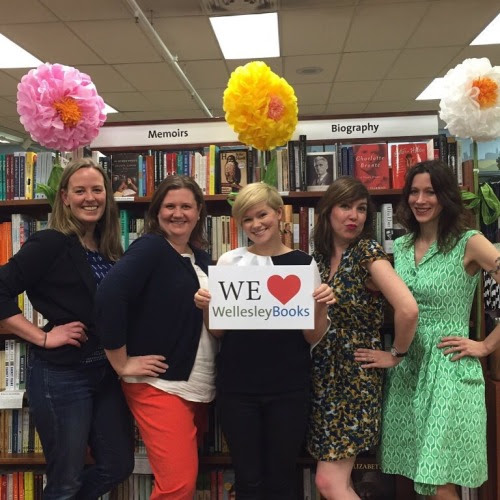 The Fierce Reads tour stop happened about fifteen minutes from my dorm room so, of course, I couldn't resist wandering into Wellesley Books and listening in on a chat that included Marie Rutkoski, whose The Winner's Kiss you'll all remember I raved about. Joining her were Cecilia Ahern, Sandy Hall, and Harriet Reuter Hapgood with Erin Bowman moderating the panel.

I didn't record everything these ladies said, but here were some of my thoughts and impressions of these impressive authors.

I haven't read anything by Cecilia Ahern but her work is extremely well-known. Her newest novel is a YA debut called Flawed and, I have to admit, at first I thought it was just like every other dystopian. A society where everyone has to be perfect? Where have we not read that before? But Flawed is set in present-day society and it's all about the judgement and pressure put on us by societal standards today. Ahern really won me over with her discussion of how she tried to make this relevant and thoughtful to teens today so I'm curious to see what other readers will make of this duology!

I'd heard of Hall's debut, namely its multiple POVs, and while I had (and still have) no interest in picking it up, I cannot deny that Hall is hilarious. Also, her upcoming novel sounds amazing and I am so excited to have snagged an ARC of it! It's all about two neighbors, guys, who become best friends when the one begins to fall for the other. Hall said she was inspired by Taylor Swift's "You Belong With Me" only wanted to write a love story with a gay guy and a bi guy instead. I'm all about this, you guys. I cannot wait to dig into the ARC!

I think The Square Root of Summer is Hapgood's debut and she really sold me on this. "It's about all the ways in which you can love and lose love," and that alone has me adding this to my TBR. Hapgood used to work in the fashion industry in England so her stories of writing this book on late-night bus rides and over the weekends in-between any spare time she got were so inspiring. I'm really curious to see how this is received and I definitely need to snag a copy for myself!

Marie is exactly as I imagined she would be. She is succinct and careful with her words, much like her prose, and she is fierce. I was instantly in love with her lipstick, her rare smiles and, yes, I can see how parts of her are within Kestrel. Rutkoski shared with us that Arin's name is the name of a friend she knew who was born while it rained. His parents made his name an anagram of rain and Marie thought it was perfect for Arin, too, who can be a calm drizzle or a tempestuous storm. She also shared that she has signed another book deal with Macmillan and that her next series will be linked to The Winner's Curse trilogy in some way. We won't be seeing Arin or Kestrel for awhile but the worlds are similar. She spoke a lot about how the world-building in The Winner's Curse was inspired by ancient Greece and Rome so I'm curious to see where the elements of her world come from in her upcoming series. I also loved how she spoke about how Kestrel and Arin's world is as real as ours--there's no magic or potions or spells--but the natural world is different, whether it be through the animals or poisons or weather. We're always cognizant that they belong to another realm but their difficulties, strengths, and weaknesses are all as human and mortal as our own.

I really enjoyed the panel tonight and a huge thank you to Wellesley Books for hosting! We got absolutely adorable bags, ARCs, and signed books (along with LOTS of cool swag and posters) so I left with far more than I brought in (which, lets be real, is the only way to ever leave a bookstore). Did any of you make it to a Fierce Reads tour stop this Spring? Which one of these books are you dying to read? Which of one these authors is your favorite? Let me know in the comments because I always need new books to add to my TBR! :)
Posted by Keertana at 12:00 PM