Review: A Darkness Strange and Lovely by Susan Dennard 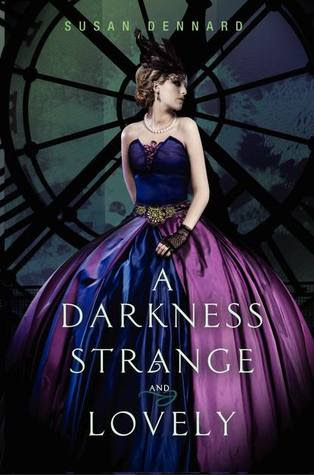 I think it's safe to say that I've finally learned not to count my chickens before they've hatched. If I'd had to pick one book this year I was wholly confident of loving, it would have been this one. Not only were the initial reviews stellar, but I had loved Dennard's debut and couldn't imagine not feeling the same rush of emotions for this novel. Thus, color me surprised to find myself underwhelmed and unimpressed by the end of this book. ADSaL is an excellent sequel - there is no doubt about that - but it is sadly not the sequel I wanted. Not in the least.

What makes Dennard such a strong writer is her excellent command of language and plot. Once again, she manages to seamlessly transport her reader into her chosen time period, this time re-creating Paris as it once was with its societal mores. Furthermore, it is clear that this trilogy has been thoughtfully pored over and planned. Dennard skillfully introduces Eleanor into the world of necromancy and drops just enough hints about the evil Marcus to keep us guessing and aching for the eventual conclusion that is to come. And all of this is done so, so well. From the introduction of Ollie, the demon who served Eleanor's brother and will soon come to serve her, to the battle Eleanor must face between embracing necromancy to save herself or choosing the safer path of her Spirit Hunter friends, every plot device is meaningful and furthers both the overarching story arc and Eleanor's own personal growth.

Yet, despite that, I was sadly disappointed by this. For one, Eleanor herself has intrinsically changed. As someone now dabbling in the "black arts" she feels more alone than ever and although she retains her headstrong spirit, she also turns to make many decisions - such as trusting strangers - that I couldn't comprehend. Furthermore, she no longer seeks libraries, brandishes parasols, or spends all that much time with her old friends. In other words, I found her rather difficult to connect with and though I appreciated her inner struggle, I can't say I wholly understood it. I still continue to love Eleanor and her narration, but perhaps not as much as I once did. She is a different woman alone than she is with the Spirit Hunters and I was especially unhappy by the fact that the secondary characters I'd grown to love were given such little screen time. In fact, they only appeared in the second-half of the novel and even then, only briefly. Although Eleanor's interactions with the Spirit Hunters were packed with depth, the majority of her storyline was spent with Ollie, who I couldn't seem to completely trust for the majority of the book. Additionally, Eleanor makes a few other new friends who are seemingly forgotten by the end - I do hope they reappear and have some significance in the concluding book.

As per the romance, the one aspect of this book I was possibly most looking forward to, I have to admit I'm torn. On one hand, Dennard perfectly captures the stubborn will of both Daniel and Eleanor and their few interactions are charged, each of them moving in tentative circles. At the same time, though, their relationship didn't progress much. Rather, this book only prolongs the inevitable. If it had had at least one meaningful conversation perhaps I wouldn't have felt so underwhelmed, but sadly I was. I do certainly appreciate that this middle novel was more a character-driven scope of Eleanor herself, but with her so changed and the secondary characters so absent, it was unfortunate not to have the romance to fall back on.

ADSaL may not have worked out for me, but it is still a stunning novel. I continue to be amazed at how perfectly this book ties together plot threads from the first novel and the inevitable conclusion to follow and it is a pleasure to read a book that skips the dreaded MBS entirely. ADSaL doesn't have a single boring word in its pages and will likely keep you glued to your seat. Despite its positive elements, I did enjoy its predecessor much more and missed many notable quirks and secondary characters in this one. I'm hoping they're all back in full blast for the conclusion, which I hope will resemble Dennard's debut a little more. All in all, not a bad book, just a bad one to expect too much out of.
Posted by Keertana at 12:00 PM