Review: Of Beast and Beauty by Stacey Jay 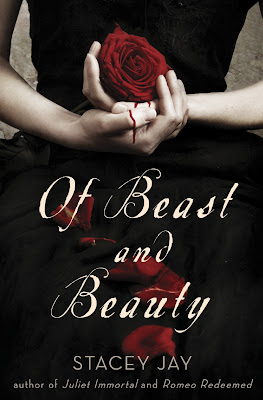 Title: Of Beast and Beauty*

*I've featured the incorrect cover for this novel - I know - I just happen to like it better. It's much darker, which fits the tone of the story perfectly, and the city featured in the background of the final hardcover is nothing like what I imagined the domed cities in this book to look like.

Every good fairy tale has a few critical elements. We have our heroine and our hero, their epic tale of romance, the obstacle in their way, and, most likely, there is a curse to break as well. “Beauty and the Beast” is easily the best of these fairy tale stories, far more romantic than “Snow White,” much darker than “Sleeping Beauty,” and all together more satisfying than “Cinderella”. With Of Beast and Beauty, however, Stacey Jay has managed to mix together all of the correct ingredients and just a little something more; a secret ingredient, if you will. And thus, I am finally elated to proclaim that Juliet Marillier’s Heart’s Blood is not my only favorite “Beauty and the Beast” re-telling…this one is too.

Isra, the blind Queen of this tale, is unlike any protagonist I expected. For one, I love that, right from the start, Jay manages to twist this classic tale around so that it is not a woman caught in a man’s castle, but rather a man caught in a woman’s. And yet, despite being the Queen of her domed city, Yuan, Isra is powerless. In her world, Smooth Skins live in glass domes to escape both from the harsh conditions of the outside world and from the mutations that take place there, giving the people who live there the name “Monstrous.” All Isra knows is that the Monstrous are cruel and dangerous and that to live safely, every few decades a queen must willingly sacrifice her blood to the roses that bloom in the gardens and keep their dome intact.

Nevertheless, despite knowing her fate, Isra is not content to merely sit still in the tower her father has confined her in. Instead, she escapes each night to roam through her city, yearning to feel the wind on her face though she cannot and yearning even more to see. When she catches a Monstrous, Gem, in her city walls one night, Isra is terrified and curious. For all her airs and graces, at her core Isra is just a girl, one who yearns for friends and freedom. What I love about her is not that she is courageous – for she is – but rather that she is perseverant and, no matter what, refuses to go down the wrong path. Furthermore, her blindness is not the detriment most people believe it to be. It enables her to see with untainted eyes and this, this I loved. Every love story is made better by characters who look beyond appearance and not only does Isra’s blindness make her romance stronger, it also makes her bolder in her vision for a better world.

Gem, the “Monstrous” who breaches the city walls and winds up being Isra’s prisoner, was possibly a character I liked better than our protagonist. First and foremost, I have to mention that his narration was perfect. I love that Jay chose to add more than one point of view in this tale as it helped to see the situation at hand from both perspectives. Isra and Gem’s people have a long and estranged history. Although they both were once the same race, the new and magical land they came to sought to help them through mutations which many of the people were frightened by. Thus, seeing Gem’s perspective – his starving people, their different customs and traditions – only added to the world-building. Furthermore, I love that Gem is so unapologetically honest. When he first sees Isra, he’s there to kill her, to take her roses and food and help his people. Even as the two get to know each other, he still thinks of ways to kill her – alongside ways to help and comfort her. Jay never crosses that awkward line of insta-love and instead allows their romance to develop, right alongside their conflicted feelings. Gem, especially, is flawed and the fact that he is even more flawed than Isra at times makes him seem all the more human, despite his scaled body.

An Epic Tale of Romance

I do, actually, think this is a beautiful love story. Not only is the pacing perfect, but the reasons behind it – true understanding, not lust – are evident too. Furthermore, there is no concrete “Beauty” and “Beast” in this tale. Both Isra and Gem have their own aspects of beauty and bestiality to their personalities and the fact that either of them could fulfill those roles is utterly satisfying. And yet, what really made me fall head-over-heels for this romantic pair was the fact that their physical attraction was explored as well. Jay doesn’t hesitate to explicitly state that Gem and Isra are physically attracted to each other as well. I feel as if most literature either goes one way or the other – true comfort/understanding with a few chaste kisses or pure lust. Of Beast and Beauty manages to strike a balance between the two, however, which I appreciated. If there is a dearth of anything in fiction it is of a teenage girl acknowledging that she wants sex, so I particularly enjoyed seeing Isra approach their relationship in a light in which she felt comfortable wanting more physically and especially seeing how that empowered her in many ways.

Obstacle in their Way

Obviously, there are many hurdles for these two to cross. And yet, perhaps most taxing emotionally is the truth of their pasts. For both Gem and Isra, their union is foolish and unethical, despite how right it feels. Not only do their people hate each other, but their people would hate them if the truth emerged as well. Furthermore, Isra has a duty as Queen to at least marry before sacrificing her life for her people. I was pleasantly surprised that Bo, the man she is supposed to marry, is given his own slices of narration as well. From Bo we finally see that Yuan is more than merely a kingdom, it is a cage to all sorts of people, not just Isra. Additionally, his perspective allows us to see the true political rulers of Yuan. Isra is just a sacrificial doll at the end of the day and this only raises the stakes and heightens our bond with her.

I won’t deny it – the original curse in “Beauty and the Beast” is a little lame. I’ve seen it employed in various ways in multiple re-tellings, which is why I love that the curse in this novel is of a different, darker nature. Granted, Isra and Gem must fall in love, but are so many deeper, subtler nuances to this as well. For one, the curse began when the first people began to build a divide between themselves – the Smooth Skins – and the Monstrous. From that initial fear and hatred grew an even scarier and more deadly curse – one that demanded blood. As the book unfolds, so does the full entirety of the curse and what it has done to both Isra’s life and Gem’s. It has affected everyone in different ways over the centuries and as the full implications of that are felt, it is shocking. One of my only qualms about this plot device is that the majority – if not all – the information about the curse is revealed in the prologue of the novel. Of course, seeing Isra discover this information and relate it to her own sheltered life is what makes the novel so intriguing, but it also manages to take away a little from the overall reading experience. Nevertheless, I have to hand it to Jay – she can build a complicated world, a complex romance, and even more twisted curse. I love it.

Of Beast and Beauty is a must-read for fans of romance, world-building, and fairy tales. As a fantasy fanatic, I loved the inclusion of magic, the unique take on this classic tale, and, most of all, this breathtaking romance. Although I’m a little skeptical to try Jay’s other works seeing the mixed reviews they’ve gotten, I am eager to see what she comes up with in the future. If it’s as brilliant as this, you can bet I’ll be clamoring after it for sure.
Posted by Keertana at 9:25 PM