Audiobook Review: The Name of the Wind by Patrick Rothfuss 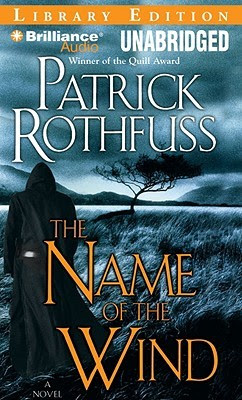 Title: The Name of the Wind (Kingkiller Chronicles, #1)

Now, to be perfectly honest, I wasn’t sure what I was expecting from Name of the Wind. While it has been lauded as an epic fantasy novel – saga, really, from the size of it and its companion – I was a little apprehensive launching into it. And, though I flinch to say it, I feel slightly underwhelmed now that I’ve sped through this massive story. Rothfuss’s debut is fantasy of the best kind, there is no denying that, and I flipped through this book at an astonishing speed, unwilling to let its characters stray too far from my thoughts. I re-read my favorite passages and laughed, I froze in sorrow, I clutched my seat in anticipation… In other words, Name of the Wind was brilliant, is brilliant, and is most definitely a book I liked, really liked. For all of that, though, I could not fall head-over-heels in love with it, no matter how desperately I wanted to. But that, I fear, is a story for another paragraph.

Patrick Rothfuss has been hailed as an author who has revived the fantasy genre and I can’t bring myself to disagree. While Name of the Wind is not quite as innovative as many may think, it is beautifully written and plotted. Although it is a hefty volume, and I will not deny that a few chapters could have easily been cut off, this story never drags or veers upon boredom. If anything, it is fast-paced and interesting, following the story of Kvothe, a reputed magician, from his trouper origins to his lowly demise into poverty and orphan hood and later into his rise to fame and heroism. Needless to say, it is an ambitious journey, but it is masterfully executed. One of the reasons I keep returning to fantasy is because of all the original ideas floating around and this book is chock-full of them. Rothfuss’s take on demons, lore, dragons, and magic is all vastly different from any I have encountered before and I ate it up like a starved child.

And yet, beyond the world-building, the reason this book is hailed as an epic is because of Kvothe. Not only is Kvothe a complex character, full of his flaws amidst his seeming perfection and bright intelligence, but he is a hero we can cheer for and get behind. Gen’s wit and clever tongue, Harry’s undying loyalty, Aragorn’s reckless bravery…they all converge together in Kvothe, creating a protagonist who is in equal parts entertaining and thought-provoking. Kvothe’s tale, one rooted in revenge and filled with antics, is pure, mindless fun. In the midst of that, though, it still manages to drop gems of wisdom from time-to-time, making me stop to reflect in the middle of the breakneck speed of this tale. And I love that. I love a character that can make me contemplate, one who can challenge the boundaries of gray and black and white, one whose life consists of tasks harder than the rest but also hope and courage stronger than them all. Or, in Kvothe’s case, fearlessness and sheer dumb luck for being born with such intelligence.

While Name of the Wind is a story I know I won’t be able to forget – especially since I’m already clamoring for its sequel – it is a flawed tale. For one, I didn’t appreciate the rendering of any of the females in this novel. Not, thankfully, because their depiction was sexist – not at all – but rather because I found their personalities to be so bland. Kvothe sees hidden mysteries in the eyes of beautiful women and these mysteries unfortunately never come to light and give them the depth they need. And, admittedly, while one female in particular was emphasized her importance, I simply felt ill whenever she was mentioned. I can’t shake off the feeling she’s about to backstab Kvothe quite terribly. I hope I’m wrong.

In addition to the women, though, Name of the Wind is only part of a tale. It doesn’t have a cliffhanger ending, but it might as well. In this volume is only the tales of Kvothe’s childhood and I’ve come to realize that, as a reader, I resent a lack of closure. I can deal with ambiguous endings – I thrive off those, actually – but I cannot stand an unfinished tale, especially when I need to go out and find the remaining 1,100 pages of it and then still sit and wait another year or more for the next presumably 1,000 pages. I want to know Kvothe’s tale, all of it, and now. It’s my fault, not the novels, and perhaps once I know how this tale ends I will enjoy this one all the more, but the fact that this book remains unfinished, not even giving the reader a glimpse of how young Kvothe came to be the legend he became or the man he is during the present, is frustrating, to say the least. Nevertheless, for avid fans of fantasy, Name of the Wind is a breath of fresh air. I am immensely grateful not to have missed out on this – especially the audiobook  version which is incredible – and can only hope The Wise Man’s Fear is as stunning and satisfying as I want it to be.
Posted by Keertana at 9:45 PM