Review: When You Were Here by Daisy Whitney 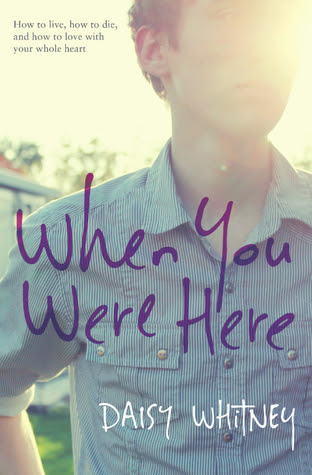 Title: When You Were Here

As far as Young Adult - and New Adult - is concerned, When You Were Here has so much to offer. Whitney has broken free of the constraints these two genres seem to impale and created a novel that, really, has so much to love. From the beginning itself, the grief of Danny, our narrator, is so palpable. Not only has Danny's mother recently passed away after a long, five-year battle with cancer, but his father was killed in a car crash years back and he is now alone. With graduation looming around the corner, Danny is reminded of his mother - and her loss - even more, especially as his graduation was what she lived for. And ultimately couldn't see. Now, Danny is simply seeking answers, both of his mother's life and his own. Quite simply, Danny cannot understand how his mother, who was dying, could be so happy when he, well and truly alive, cannot be.

And this is such a beautiful idea to explore. I feel as if life is always throwing us curves, testing us to our limits, and this question, this unattainable answer of happiness, is forever crossing our minds. Or at least mind, at any rate. As such, to see Danny attempt to answer this in his own way, on a trip to Tokyo, the city he loves, was a truly beautiful journey. Danny is grieving, he is sarcastic, he is in pain, and yet he is curious and his love for Tokyo and its culture and lifestyle is so palpable. Everything about the setting of this novel, including the people Danny meets there who soon become his friends, are so vividly written and portrayed. Whitney's characters are fleshed out and solid, the type of people who have flaws and are still loved. And they all have their back stories, their pasts, their problems. And they're all still sticking it out, each day at a time.

For me, this is where my issues with this novel begin to emerge. While I appreciate the efforts Whitney took in creating such stark and realistic characters, I do feel as if our exposure to them was too minimal. Danny's sister, for instance, who is adopted shares a gripping story of her own growth and acceptance into finding herself in her Chinese roots. Clearly, while this is important to Danny, that importance is never felt to the reader for her screen time is so short. Even the characters who did play a greater role, such as Kana, the Japanese girl Danny befriends, remain static upon the page because, despite their depth and impact on Danny, their influence is never fully felt emotionally.

And yet, When You Were Here does have its emotional moments. Danny himself undergoes a slow, creeping growth that, though concluding in a neat epiphany, was very well-written. Holland, though, had the story that drew me in the deepest. Danny has had a massive crush on Holland, his neighbor and the daughter of his mother's best friend, ever since he was young. With carefully timed flashbacks and present-day scenes, their love story is built up, from its nascence to its sudden end. Surprisingly, though, the romance is subtle, never resorting to meaningless drama and proving to be rather poignant overall. Even the sex scenes - the few of them that lie in this book - are awkward and realistic, making me adore this novel for the places it was willing to go and the boundaries it was willing to climb over.

Still, the fact remains that, in the end, When You Were Here didn't do a whole lot for me. It was a quick and memorable read, one that managed to pack a punch in its short pages, but sadly not enough of a punch. Whitney's novel has been compared to Forman's Where She Went and while I believe that fans of Forman will find much to love in Whitney's latest, the two novels are vastly dissimilar. Where Forman's work is marketed as a romance, proving to be an in-depth analysis on a young man as he comes to terms with himself and his life, Whitney's novel is really about a young man...and so many more people too. Danny's story was not the all-consuming emotional investment I expected it to be. Granted, it's a lovely book, full of tales that will likely influence many readers, but it didn't do much for me simply because I wanted more from it. And the fault most definitely lies with me - I am not an easy reader to please. On that count, When You Were Here is a beautiful edition to your shelves (LOOK at that cover!) and a touching novel with unforgettable characters. Just don't expect too much from it and it will likely deliver the full impact you want it to.
Posted by Keertana at 12:00 AM