First and foremost, I have a confession to make: I only read half of this book via audio book before switching to a physical copy. Now, to quickly clarify, the audio for The Iron Duke is phenomenal. Its narrator is engaging, builds the atmosphere of this world perfectly, and manages to touch upon a few different voices as well. Yet, for a reader like me who is recently immersing herself in the world of audio books, this was tough to follow, full of intricate world-building details that I would have loved to pore over and think about with a physical book but had to struggle to comprehend with an audio book. Thus, I wouldn't recommend the audio version of this unless you are used to audio books of all genres and varieties.

Now, that being said, it's safe to say I'm practically in love with this Kraken-invested world and sexy book that just oozes with intelligence, politics, and murder. Seriously, Meljean Brook might as well have written this just for me. Not only is The Iron Duke an excellent example of real steampunk, complete with gadgets and rich in world-building, but it is also a steamy romance that managed to capture my heart, despite its unsteady beginning. I'd much rather avoid going into the intricate details of the world, mostly because I don't want to have to take the time to describe it and partly because discovering it is what makes this novel such a delight, but I will say that our world isn't the same. The Horde is a deadly group that was destroyed by the Iron Duke years ago, but not before they controlled the emotions of the people and raped many women, giving them bastard children. Mina Wentworth, female detective and kick-ass heroine extraordinaire, is one of these children and cannot escape her features or the sneers that follow her. When a man falls from an airship, only to lie dead in the mansion of the Iron Duke, Mina slowly uncovers the beginnings of a conspiracy - one that spell the return of the Horde.

When Rhys, the Iron Duke and hero of the world, first sees Mina, he instantly wants to possess her. As an alpha male with a capital A, it seemed as if Rhys and I were doomed to clash, but thankfully, Mina saves the day - on more than one occasion. Mina can hardly believe that Rhys genuinely wants her, a woman who is rejected by all of society, but instead of falling into his bed, she keeps her distance and isn't afraid to get out her pistol when she needs to. Folks, I effing love Mina. If I had to pick one heroine to make my sister, I'd pick Mina. Not only is she strong and fearless, but her quick mind and sharp wit make her banter with Rhys a delight, not to mention their discussion of politics. In solving the murder mystery at hand, Mina doesn't disappoint, keeping her mind focused on her mission despite the steamy romance that brews on the side. Admittedly, after his initial appearances, Rhys had a long way to win my heart, but he quickly came to admire Mina and fall for her mind, not just her body. Although he could be pushy initially, he quickly understood that the key to Mina's heart was not forcing her and he listened when she said no - all factors that slowly, slowly made me fall for him as our hero. Additionally, though Rhys's PoV is sparse, it appears at the perfect times, giving us an ideal insight into his actions and good intentions. As a self-made hero, one who emerged from the ashes of slavery, Rhys still doesn't have a good excuse for being an ass in the beginning of this novel, but as he grows and changes, so do our feelings for him.

Not to be outdone, though, the secondary characters in this novel are just as entertaining. In fact, I am itching to get my hands on the sequel because of my love for two of them, not to mention their swash-buckling pirate adventures, complete with zombies. Honestly, The Iron Duke has everything you can think of - and more. It has my favorite kind of slow, steady, and steamy romance, all pushed into a wide backseat to give room for the adventure at hand. Although the beginning of this novel can be tough to get into at first, mostly because of the thorough immersion into a new world, it is utterly worth it since, before long, it's practically impossible to think that Mina's world is not as real as your own. And Mina! Mina, Mina, Mina. Just read this book for her. Very rarely do I come across kick-ass heroines whose strengths lie in their inner courage, outward strength, and sharp mind, but Mina hits all those boxes and creates more of her own. If Meljean Brook's other novels are anything like this one, then it's safe to say she's made a fan out of me. 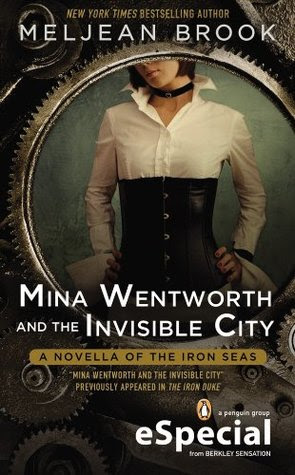 Gosh, this had me squealing like the fan girl I seem to have become overnight. Or rather over just a few daylight hours of reading. No matter. Mina Wentworth and the Invisible City is a novella, though not too short thankfully, that details the marriage of Mina and Rhys alongside the everyday troubles they face. Honestly, I love reading about the long haul to make a marriage work just as much as I love reading about the journey to finding "The One" and although this book doesn't necessarily outline problems in Mina's marriage - because it's kind of perfect and lovely, really - it does address the issue of Rhys's constant worry over Mina and protectiveness. What I loved about it, in particular, is that Rhys never contains Mina. Not only does he allow her to keep her position - and her title of Inspector Wentworth - but he respects and takes pride in her occupation. Gone is the Rhys who, for a short while, reminded me of Christian Grey. No, this Rhys is kind and caring and understanding and he allows - and loves - that his wife is fiercely independent. We also get to see more of Anne, the small tinker girl Mina befriends, in this novel and I really loved how everything came together, both with the murder mystery and with them as a family. All in all, not a necessary novella, but an engaging and entertaining one that all fans of Mina and Rhys will want to get their hands on.
Posted by Keertana at 12:00 AM