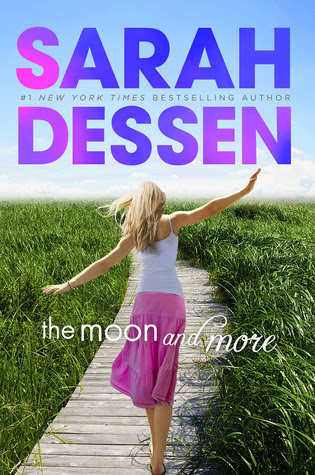 Title: The Moon and More

The Moon and More has a lot to love, but it's very different from a typical Dessen novel. I think, by now, we've all come to expect a certain type of book when we hear the name Sarah Dessen. Obviously contemporary with a heavy dose of character development, beautiful settings, and swoon. Not to mention rich secondary characters and always, always, always growth, if not self-discovery. And it's a formula that works, every time. While I am thrilled that Dessen chose to veer off from her usual this time around, I can't say I wholly enjoyed it. Nevertheless, this is perfect for those who are looking for highly realistic young-adult-on-the-cusp-of-new-adult reads.

Emaline is an easy character to love; motivated, kind, and with a readable narration. While she lives by the beach, helping a family business, making out with her boyfriend Luke, and generally enjoyed life in a small town, she yearns for more. Emaline was conceived when her mother was only a young teen and, consequently, her family is a little different from most. While she has her mother, she also has her dad - who married her mother when Emaline was only three - and two step-sisters. And then, of course, is her father whose contact with her is still recent but already unreliable for he was unable to pay for Emaline's tuition into Columbia and refused to attend her graduation. Needless to say, the relationship between them is strained at best. In the midst of all this, though, Emaline's relationship with Luke isn't heading in the direction she planned and now her father is driving down for the summer as well. All in all, this isn't shaping up to be the summer Emaline imagined...not at all.

As always, Dessen excels in building family relationships. Emaline's relationship with her mother is deep and touching, the kind of bond that takes years to build but is so effectively conveyed by Dessen's writing. Furthermore, Emaline's blooming friendship with her half-brother, Benji, is simply adorable, especially as she helps him to cope with his parents - her father's - divorce. In particular, though, Emaline's relationship with her father is most intriguing. It ends on a very realistic note, bittersweet because of the sad admission that people don't always change and yet the hopeful thought that something strong still does exist between them. And their journey there, their awkward encounters through the summer and the curveball they constantly seem to throw at Emaline, are all so richly explored. Classic Dessen: she never disappoints.

And yet, her most compelling point, the romance, seriously fell flat. For one, it should be known that Emaline and Luke are together only for a short time before they break up and Emaline winds up dating Theo, a NYC student in Colby to film a documentary on Clyde Conaway, a local resident and past artist of great merit. On one hand, I really did like Theo - he was different, cute in a nerdy way and very insecure about himself, unable to really believe that the gorgeous Emaline would date him. At the same time, though, he's quite irritating, a pushover when it comes to listening to his boss and ambitious in a round-about manner. Personally, I was impressed that Dessen created an unlikable love interest. I mean, let's face it: most romances in life don't work out and even if they do, not all of them make you swoon. And yet, I will admit that this set-up didn't make for an interesting read. For one, the plot was slow - as is always with case with Dessen's novels but where the romance picks up when the plot lags, here the romance only slowed it down further - and secondly, Theo was just not a character I could get behind. As readers, we don't really know much about Theo beyond what we see on the surface and he remains that way, oscillating between extremes (insecurity and ambition) and generally failing to charm the crowd.

In addition, there was a lack of depth regarding the secondary characters. Dessen can write beautiful sibling relationships, as she proved with this installment, but I felt as if the bonds between step-sisters was forsaken in this novel in favor of the half-brother relationship Emaline sustained with Benji. Sadly, I know Dessen can write multiple sibling relationships well, as in Just Listen, but that aspect was ignored with her latest. Another issue was the fact that Emaline's father got a lot of limelight and thought in this, but not so much her dad. Cashore's Fire explores a similar father/dad situation, but both these figures are fully realized and their relationship with Fire is as well. The Moon and More lacks that clarity.

Nevertheless, despite the flaws this book had, its messages and themes were incredible. Emaline not only comes into her own, realizing what she wants from life, but she also comes to realize that change and disappointment go hand-in-hand with every walk of life. In this summer leading up to her first year as a college student, she grows immensely and in important ways, which was a nice change from the naive heroines whose growth seems so obvious. All in all, despite my qualms with this one, The Moon and More is a solid read and a Dessen novel I wouldn't hesitate to recommend. Only, really, The Truth About Forever and Just Listen are her best and probably will always remain that way.
Posted by Keertana at 12:00 AM