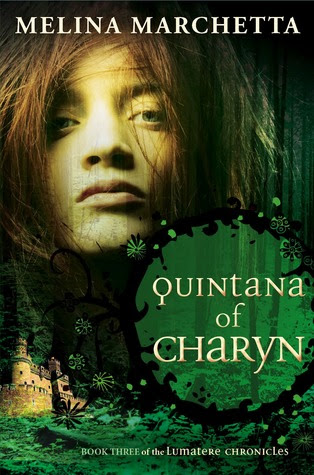 
Well, call me a coward, but I have been avoiding writing this review like the plague. Actually, worse, considering I'd run towards a plague before I ran towards writing a review for this. I always have two feelings when I finish a Melina Marchetta novel. One, of being incredible happy, content, and simply awe-struck for the novel is always amazing beyong belief; and second, of feeling ever-so-slightly nervous because, let's be honest, how could I ever possibly even think or imagine how to write a review that would do the book I read justice of any kind? Well, I can't. What I can do, however, is tell you that I loved Quintana of Charyn. It is a beautiful, provocative, and gorgeously written novel that ties up all loose ends, concludes this series without flaws, and renders me speechless. Yet, for the first time, I have to admit that there is something about this book that fell just a tiiiny bit flat for me. I feel like a traitor saying this, especially considering I've given every single one of Marchetta's novels 5 Stars and even went out of my way to order this novel from Australia because I couldn't wait to read it and it was only releasing in America around six-ish months later, but, when compared to all of Marchetta's prior works, I feel as if this just might have been her weakest novel yet.

When I began Quintana of Charyn, I thought for sure that it would wind up being my favorite of the Lumatere Chronicles. Well, Finnikin of the Rock still is, although I suspect Froi of the Exiles would be if I re-read it, knowing all that I do now about Quintana's character. Nevertheless, somewhere a little after the half-way mark of this story, Quintana began to steadily lose me. It wasn't that the story lagged or that I was bored, it was simply that it was too overly dramatic. I didn't need that many scenes or that much build-up and prolongment to the happy ending we all knew was awaiting us. I found myself wondering why so many pages were still left when not so much of the actual story was left at all. It was a very well-written conclusion that brought a smile to my face, but the fact that it fell into the let-me-be-a-dramatic-conclusion trope was rather disappointing.