I am so excited to be showcasing an entry from Malachi's Journal on my blog today! If you recall, Malachi is the sexy, brooding, and utterly kick-ass male protagonist I fell head-over-heels in love with when I first read Sarah Fine's debut, Sanctum. (My review HERE.) Today, I will be excerpting one day from Malachi's journal, a prequel to Sanctum, and hosting an international giveaway for an amazing Sanctum prize pack. In addition to my blog, there are nine other blogs participating, so be sure to search around the blogosphere to check out all the (fantastic!) diary entries and increase your chance of winning! 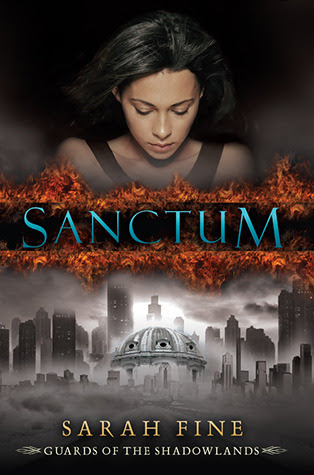 “My plan: Get into the city. Get Nadia. Find a way out. Simple.” A week ago, seventeen-year-old Lela Santos’s best friend, Nadia, killed herself. Today, thanks to a farewell ritual gone awry, Lela is standing in paradise, looking upon a vast gated city in the distance—hell. No one willingly walks through the Suicide Gates, into a place smothered in darkness and infested with depraved creatures. But Lela isn’t just anyone—she’s determined to save her best friend’s soul, even if it means sacrificing her eternal afterlife.  As Lela struggles to find Nadia, she’s captured by the Guards, enormous, not-quite-human creatures that patrol the dark city’s endless streets. Their all-too-human leader, Malachi, is unlike them in every way except one: his deadly efficiency. When he meets Lela, Malachi forms his own plan: get her out of the city, even if it means she must leave Nadia behind. Malachi knows something Lela doesn’t—the dark city isn’t the worst place Lela could end up, and he will stop at nothing to keep her from that fate.

Now, a small quote from Sanctum, in which Nadia first sees Malachi's many journals:

Malachi’s quarters had no windows, no decorations. His room was just like everything else about him—nothing unnecessary, nothing wasted. His narrow cot rested in a corner, right next to something that looked like a hat rack. He walked straight to it and hung his bloody, stained armor over it. A small desk stood across from the rack, but the only things that sat upon it were a fountain pen and a single book, like some kind of journal. Neatly stacked in a corner rose a tower of identical books as tall as I was. A lot of journals.

If you want to get to know someone, reading his journal is the way to do it (though you should probably ask permission first). Malachi is no exception: his journals contain his thoughts, hopes, fears, plans, and adventures during his time in the dark city. Starting today, excerpts will post regularly throughout the publication of the Guards of the Shadowlands series at www.guardsoftheshadowlands.tumblr.com, but to get things started, you can read excerpts from Malachi's first ten days as a Guard NOW. And you can enter to win one of ten Sanctum swag packs, which include an exclusive bonus scene from Malachi's point-of-view!

Malachi's Journal Entry
Day 4: Another Guard came to see me today. Takeshi is his name, and he brought Raphael to translate. Takeshi is from the Empire of Japan, but speaks several languages. We realized we both speak German. He wondered aloud how someone as scrawny as I am could manage to take down so many inhuman Guards at once. I took it as an invitation to show him. But as it turns out, Takeshi is even faster than Philip, and his baton extends to become a staff with which he happens to be devastatingly effective. Raphael healed my broken arm and suggested I refrain from attacking the other human Guards, as they are both capable of killing me before I land a blow. We'll see.

Sarah Fine was born on the West Coast, raised in the Midwest, and is now firmly entrenched on the East Coast, where she lives with her husband and two children. When she's not writing, she's working as a child psychologist. No, she is not psychoanalyzing you right now.

Visit Sarah: Twitter/Facebook/Website/Tumblr/Goodreads
International Contest!
Enter to win one of ten Sanctum swag packs, which include exclusive bonus scenes from Malachi's PoV! Just fill out the Rafflecopter below! Good Luck!
a Rafflecopter giveaway


You can check out my review of Sanctum HERE. It's one of the most remarkable debuts I've read this year, so even if you don't win, be sure to check it out! :)
Posted by Keertana at 12:00 AM