Review: Harry Potter and the Sorcerer's Stone by J.K. Rowling 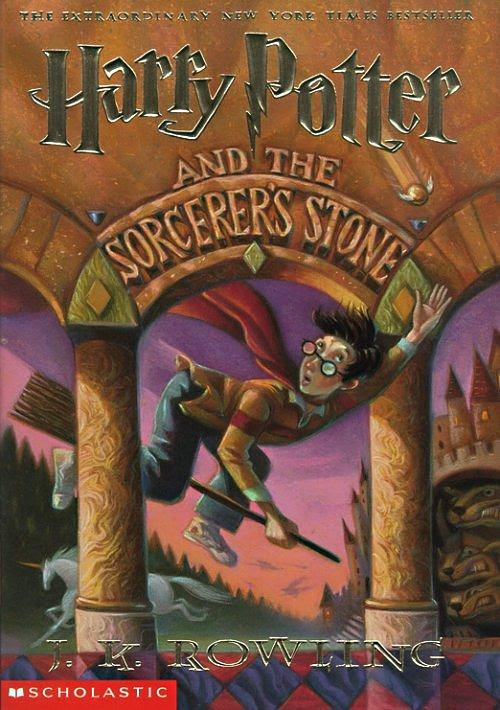 I can still remember the first time I held a Harry Potter book in my hands. In fact, the cover of my paperback copy of Harry Potter and the Sorcerer's Stone has a small crease on it from the time I flipped it open in too much of a rush to read it. It has my favorite quotes underlined, witty passages starred, and is covered with post-it notes on nearly every page from the amount of times I've re-read it. Now, reading it again so many years later, I am taken back to all that magic, all that wonder, and all that amazement that I first had when I laid my eyes on these books.

In all honesty, this is a series that needs no review - avid fans will re-read it without hesitation, new book lovers will pick it up without even consulting a friend for approval, and it will live on in our world as a classic. Yet, as one for whom Harry Potter was a life-changing experience, I feel the need to justify, or at least explain, what this book has done for me and why it stands the test of time as a remarkable story, even today.

I am not the first one to begin analyzing the Harry Potter Series. Since the release of Deathly Hallows, there have been numerous authors who have attempted to make sense of a greater meaning within Rowling's work. Some have even claimed that there are Biblical references of Christianity within her pages, but not being a Christian, I have never found them. Still others, like me, prefer to keep this book out of the scope for analytical reading and simply enjoy the story within its pages. I, by no means, think that J.K. Rowling is a brilliant writer. If anything, I think her writing is slow in some parts, lacks figurative language, and contains a dearth of descriptive passages. To me, good writers are people like Jane Austen, Charles Dickens, Charlotte Bronte, J.R.R. Tolkien - or even more recently - Laini Taylor, Megan Whalen Turner, Cath Crowley, Melina Marchetta, and John Green. These are people whose ever word, every phrase, and every sentence is a beauty to behold and read. Rowling's work is not like that, but what makes her stand out from all others is her imagination, creativity, and her art of storytelling. No one else can quite tell a story like Rowling can and she does a splendid job tying up all the loose ends and fitting together every small clue to make a bigger puzzle piece. In fact, I was astonished yet again while reading The Sorcerer's Stone this past weekend for seeing names such as "Sirius Black" "Peter Pettigrew" and "Grindlewald" come up even in the first installment of this series. It is clear that Rowling not only puts forth a lot of thought into her writing and plot outlining, but her manner of telling a story and uncovering the small pieces is unrivaled. 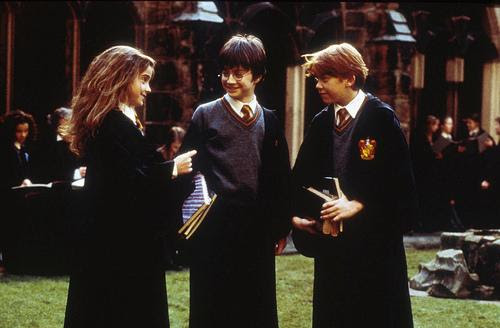 Rowling's talent aside, what strikes me the most about the series is the fact that I am able to glean something new from it every time. When I was younger and first read this, I learned that it is okay to be smart and intelligent and a know-it-all, but it is even better to be brave and courageous and strong. The second time I re-read this while waiting for Order of the Phoenix to release I took strength from the fact that if Harry could survive without his parents for so long, even I could spend a summer without them in India. Much later while waiting for Deathly Hallows to release I began to realize how truly dark and forbidding even this first installment of the series was. I was struck by the horror of the Forbidden Forest and found myself thinking long and deep about what it meant to live a cursed life. I also finally found myself appreciating Dumbledore's cleverness in using the Mirror of Erised to ensure that only one who wishes to find the stone and not possess it would be the one to come in possession of it.

Over the years, my parents have become resigned to the fact that this is a series that I will eventually be forced to re-buy at some point in my life because eventually, the spine will break from over-use. Yet, while they have become resigned to this fact, I have come to marvel at the magic within its pages even more for every time I re-read this series, not only am I transported into happiness, joy, and the feelings of wonder I felt when I first read this, I am also able to glean something new from it every single time. That, in my opinion, is the true reason that the Harry Potter Series will live on forever. It isn't something you can ever get tired of reading, of living, of breathing. Furthermore, Rowling is able to integrate larger themes within younger novels with such ease that even the wisest of us can have it in ourselves to learn something from her books, her characters, and their experiences. 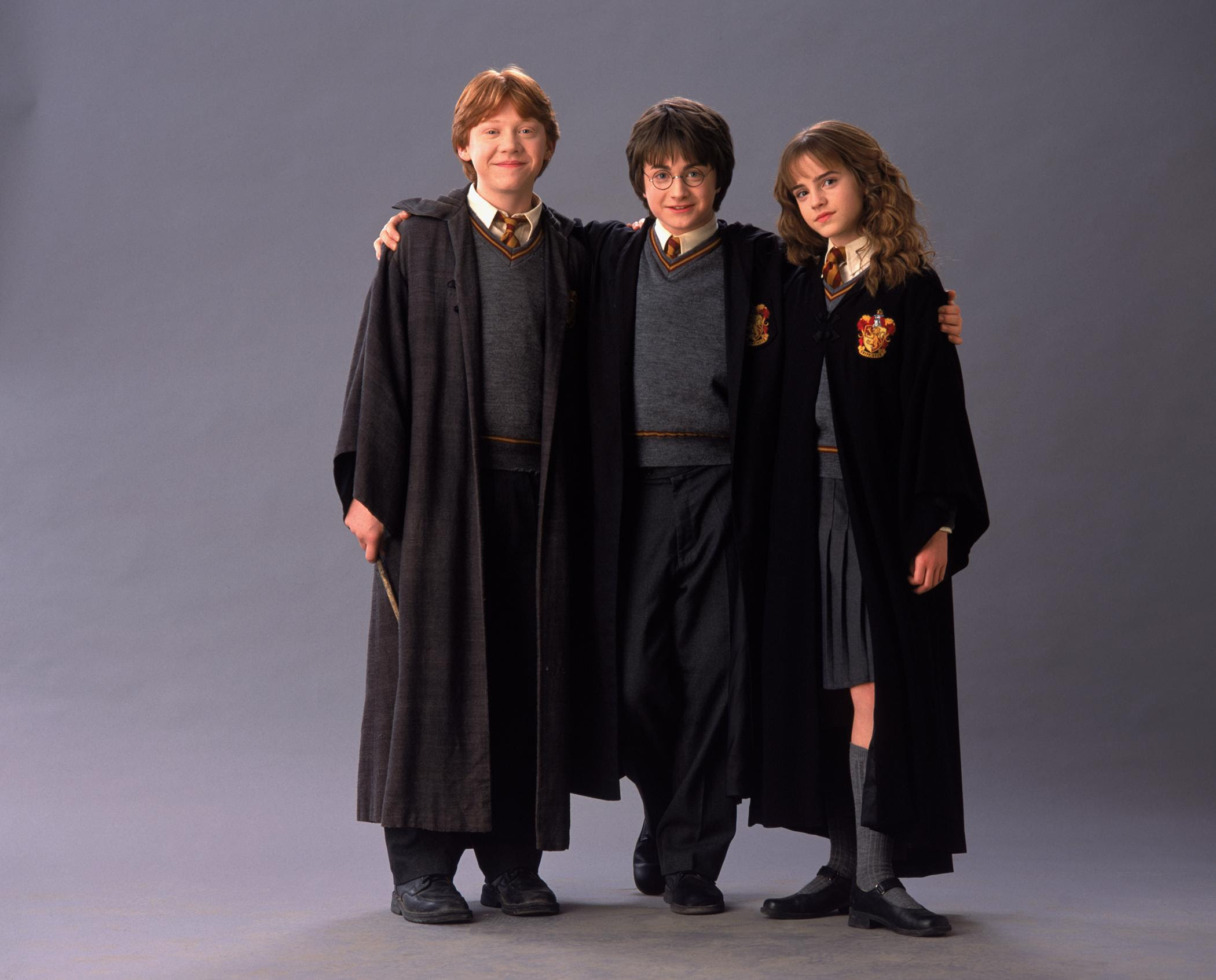 Thus, having read this book again this year for what seems to be the umpteenth time, I find myself once again stumped by the great and wise Albus Dumbledore. What I took from the series this time around is that Dumbledore is a liar. Now knowing about Dumbledore's less-than-honorable past, it is safe to say that Dumbledore most certainly did not see himself holding a pair of socks in the Mirror of Erised. If anything, he saw his family, just like Harry did. So, despite being ten years older, ten years wiser, and ten years more mature than when I first started these books, I have learned once again that even the noblest amongst us lie and although falsehood is not condoned, sometimes it is necessary in our lives. It is times like now that I find myself in awe of Rowling and wish to thank her for all she has ever given me, because no matter what is taken away from the world in war, famine, and poverty, magic and imagination are two things that can never be taken away from us.

If you would like to join the Harry Potter Summer 2012 Re-Read, you can join on GoodReads and feel free to comment on my blog, link back, and join in on a summer of wonderment that will keep the magic alive for years to come!
Posted by Keertana at 1:03 PM