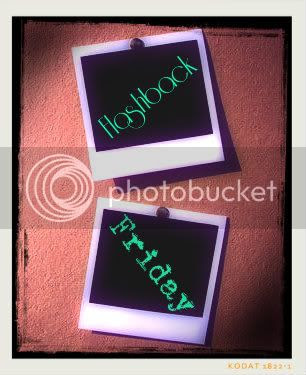 Flashback Friday was originally an idea I came up with - or thought I came up with at any rate. Since I'm a new book blogger with dozens of reviews on GoodReads, I thought Flashback Friday would be a great way to feature some of my older reviews on my blog. However, it turns out that there are tons of different bloggers out there who feature a Flashback Friday of their own. So, I am taking ideas from two such bloggers - Clean Teen Fiction and Skyla11377 - and meshing them together to create my own version of Flashback Friday - a version which features some of my favorite books from the past year and provides a review for them. You don't have to be a new blogger to participate in Flashback Friday though. This is simply an opportunity to showcase novels we've read in the past and enjoyed, even if there is no written review for it, so feel free to grab my button or make your own and participate! :)

This, ladies and gentleman, is how you write a spectacular debut novel. Clarke’s first book is a masterful mix of imagination, thrill, suspense, and a subtle, but underlying, romance. Although I do have my own qualms with this book – which I will get to in a little bit – I can’t deny that it kept me entertained, forcing me to devour it all in one sitting. I fell in love with the character interaction and rich world that Clarke had created and I am already eagerly anticipating the sequel of this fantastic story. In fact, my only complaint at having received this as an ARC is the fact that I have to wait longer than anyone else to get my hands on the sequel, but you can bet that I’ll be one of the first ones to do so.

Seventeen-year-old Ananna, the daughter of a rich pirate lord, wants nothing more than to become captain of her own ship, sailing the seas with a crew of her own. However, when she is forced into marriage with a boy she does not love and barely trusts, she does the only thing she can think of – she runs away. Pirates, however, are not known to be forgiving people and before she knows it, Ananna has an assassin on her trail. Yet, Ananna’s assassin is no ordinary killer and when Ananna unwillingly saves his life, she finds herself bound to him in a way she never wanted. Naji, the enigmatic assassin who is sent to murder Ananna, is victim to a terrible curse causing him to live his life protecting Ananna and forcing him to experience severe pain when she is away or injured. Thus, is it with reluctance that the two of them embark on a journey to find a cure to Naji’s “impossible” curse. Yet, as time will tell, there is more to fear on their adventure than pirates and assassins and their deadliest threat may come from what, to Ananna, is completely unknown…

In all honesty, the plot of this story reminded me a lot of Brightly Woven. Both novels feature a tortured male protagonist who is suffering from a curse and a female protagonist who is forced to remain with him, slowly falling in love with him as time passes. Although these similarities were egregiously obvious throughout the story, The Assassin’s Curse threw in something completely different and original that made it stand out. For one, Ananna is an admirable heroine. She stands up for herself, doesn’t back down from a fight, and knows how to hold her own. Although she comes across as young, juvenile, and even quite less-than-kick-ass at first, that quickly changes. I thoroughly enjoyed Ananna’s narration – her quick wit, brilliant humor, and rapid banter made this novel one that I couldn’t put down. Furthermore, she is far from any typical “Mary Sue” character that I’ve come across and isn’t shy to argue or challenge Naji and the predicament they find themselves in.

Speaking of Naji, I think it’s safe to say that I’m in love with him. There is simply something about tortured characters that rips out my heart and tears my soul, making me sympathize with and eventually fall head-over-heels in love with them. Naji was no different. At first, Naji can come across as cruel, strange, and even hard to like. However, Clarke does a spectacular job developing his character as we progress through the story. She doesn’t hesitate to show us Naji’s weak, vulnerable, and ugly sides just as much as she knows us his compassion, pain, and total badassery. Naji, despite being a handsome man, has a scar across his face which disfigures him, causing him to be extremely self-conscious. Although it seems as if taking on so many issues – a curse, an adventure, pirates, assassins, murder – seems too much to do justice to without adding on the classic theme of don’t-judge-a-book-by-its-cover, Clarke does a remarkable job of balancing everything out. In fact, I think this idea, more than even the curse, truly made Naji stand out to me and revealed a whole other side of him we previously didn’t get to see. What I loved most about it though was how Ananna found it in herself to love him and see him for all his positive aspects rather than his ugliness, murder, and killing. All in all, I feel as if I’ve gotten a truly thorough and complete picture of both Naji and Ananna’s characters after reading this novel and I couldn’t be any happier. The romance in this book is very subtle and slowly creeps up on both Ananna and the reader. I don’t want to give anything away so all I’ll say is that I can’t wait to see where it goes and how it progresses in the sequel!

Gushing aside, I still had a few qualms with this book. First and foremost, it should be noted that this novel takes place in an entirely different world – a world which I still, unfortunately, don’t know too much about. This lack of information did not hinder the story in any manner and was, in fact, probably a very calculated writing maneuver as the narrator, Ananna, obviously knows about the world she lives in, but as a reader I found myself wishing there was more importance given to the world-building aspect of this story. I definitely think we will be getting a lot more information about this world and the multiple detailed intricacies of it in the sequel, but this all goes back to another issue with this novel: the pacing. Now, when I discuss pacing I don’t mean that this book was slow or lagging in any aspect, because it wasn’t. This was a true page-turner. By pacing I mean that there was a flood of information given to the reader during the first few chapters and then the plot took over and there was more information-dumping in the last chapter. I know I would have enjoyed this book more if the intrigue and mystery about Naji’s curse was not revealed to us in the very beginning (or in the synopsis for that matter) and if the world-building had steadily progressed and increased throughout the course of the novel.

Overall though, The Assassin’s Curse is a debut novel you should definitely watch out for. It is entertaining, filled with heart-pounding action and characters that you cannot help but love. Even though this novel comes across as juvenile in some parts, I think it is an excellent addition to the small cluster of good YA fiction out there. Plus, who can resist that beautiful cover? Not me, that’s for sure! I am thrilled to see where Clarke is taking this series and I’ve enjoyed every minute I spent in her world. So, when October rolls around, don’t let it take a curse (or me cursing you) to read this! Pick up this amazing debut – you won’t regret it!(:

Thank you to NetGalley and Angry Robot/Strange Chemistry for providing me with an ARC of this book and giving me the opportunity to read and review it!
Posted by Keertana at 11:48 AM