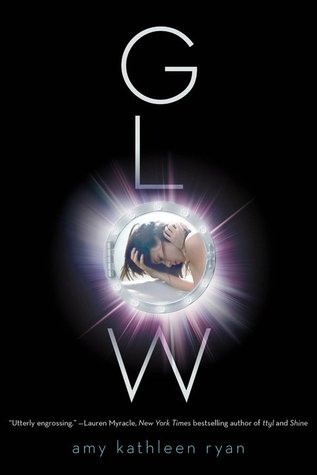 
I read Glow with my heart caught in my throat, flipping pages frantically and waiting for the sick feeling in my stomach to evaporate. Even after having finished this book, though, my heart hasn’t found its way back to my chest; I find it hard to breathe. For all the trouble it gave me, however, Glow has been one of the most satisfying novels I’ve come across this year. Amy Kathleen Ryan’s unapologetic prose and savage characters are the unpretentious realities I seek in a thought-provoking novel and, if nothing else is guaranteed, it is this: Glow will turn your mind inside-out and force you to re-think everything you thought you knew about humanity.

Waverly and Kieran are barely sixteen-years-old, but they’re already considering marriage. As the first generation of children born on the Empyrean, a spaceship that set off for New Earth decades ago, it is their duty to ensure the continuity of the human race. Kieran, already groomed to become the next Captain, is the perfect choice and, despite a few misgivings, Waverly is prepared to do her duty. When the New Horizon, however, the sister-spaceship that set off a year before the Empyrean, looms into view, Waverly and Kieran’s lives are changed forever. After all, the New Horizon should be millions – if not billions – of miles ahead of the Empyrean, so the fact that they have slowed down their vessel to help the Empyrean catch up spells trouble.

And trouble it is. When these two spaceships first set out from Earth, their chances of survival were the same. In fact, the only difference remained the religious beliefs of their crew members. Yet, while the Empyrean solved the fertility issue plaguing their crew, the New Horizon didn’t. Thus, with no children aboard their ship – and therefore no one to carry forth their legacy – the Empyrean falls under attack, one hundred and thirty girls rounded up and kidnapped while dozens of adults fall dead, struggling to defend them. Alone on a spaceship with boys of various ages, Kieran is lost. And alone on a strange vessel, with a dictator named Anne Mather, all Waverly knows is that she must escape – before they touch her.

Glow brings forth a future vision that is both startling and eerie. Not only is Ryan’s world-building impeccable and intricately paced, but it is impossible to find a loop hole within the dystopian world she was built. Moreover, the story itself is nothing short of terrifying: a horror-story of human capabilities when pushed to the utmost degree of sanity. Anne Mather, the obvious “villain” of our tale is manipulative and charismatic – deadly traits to work against – but Ryan imbibes an entire back story to her existence that makes it impossible to view her in a stark black-and-white light.

What makes Glow such a remarkable piece, though, is the fact that Ryan is willing to create unlikeable characters. On the Empyrean, Kieran believes he must lead the remaining crew, particularly as he would someday become Captain. As he begins assuming power, though, he finds opposition in the form of Seth, an abused, but intelligent, teen who has remained jealous of Kieran’s position, status, and engagement to Waverly. As Seth rises to power, undermining Kieran and finding fault with his actions, Kieran fails to achieve what he set out to do. Yet, as the situation aboard the Empyrean becomes increasingly frantic, wrought with shifting allegiances between Seth and Kieran, the true nature of both teenagers becomes apparent. Our loyalties, too, move back-and-forth, sympathizing with one boy and then the next as more and more is revealed. Thus, by the end, it is impossible to discern who is better, who is worse, and who is justified in what they did. Ryan blurs these lines and her stark, direct prose only serves to muddle our brain. After all, without the author telling us who to root for – without her bias leaking through the words – are we siding with a villain or a hero?

Waverly’s case, though different, also has its share of similarities. Stuck on the New Horizon, she must team up to escape Anne Mather – and fast. After all, Mather has made no secret of the fact that the girls have been chosen for their gender; nothing more. It is a shocking situation, particularly as the crew of the New Horizon supports Mather and dares not look too closely at how she handles her power, as long as they finally get what they’ve wanted for so long: children. While Mather’s cruelty is apparent through Waverly’s struggles – many of which left me gasping in outrage – I admired the subtle messages Ryan was able to weave through the narrative. Waverly, as well as many of the other girls, have been subject to sexual harassment in the form of lingering looks or the equivalent of wolf whistles. While Glow isn’t necessarily a feminist piece, the trials and tribulations that women have had to suffer from the discomfort of sexual harassment and other forms of sexual violence are outlined vividly, further blurring the lines between right and wrong as Ryan explores the decisions taken by these victims and the morality of those choices.

Ultimately, Glow is an intense, dark novel. Ryan’s characters may be teenagers, but the content of this novel is in no way adolescent. It is, solely, for mature readers who are looking for a story to make them think, reflect, and ponder. With just one book, Ryan has shot up to become a favorite author of mine; her writing is evocative, characters complex, and final message poignant. No stone is left unexplored in this psychological study of humanity, which I appreciate. Glow is proof that the Young Adult genre can transcend its artificial barriers of romance, delivering a novel that is worthy to be read, shared, and discussed with readers of all ages.
Posted by Keertana at 12:00 AM