Note: As this is a series composed of companion novels, it is not necessary to read these books in order (as I prove with my reviews below). 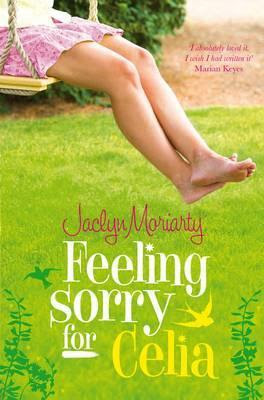 Feeling Sorry for Celia is hilarious, heartfelt, and an absolute delight. Moriarty's specialty seems to be novels told in an epistolary form and her talent comes alive in this novel. Elizabeth, the protagonist of our tale, begins a written correspondence with Christina, a girl from a neighboring school, that soon blossoms into a tight friendship. The titular Celia is Elizabeth's best friend since childhood, a wild spirit who is constantly running away from home. Like Moriarty's latest, A Corner of White, her debut serves as a character-driven piece, centering about Elizabeth and her gradual journey of self-discovery. With a long-lost father come to stay in Sydney, a neglectful mother who communicates through notes, and a missing best friend, Elizabeth's year is about to become far more complicated than she anticipated.

What I love about Moriarty's work is the utter cleverness of it. I kid you not, this woman is a genius. Feeling Sorry for Celia is dispersed with short notes to Elizabeth from multiple organizations with names such as "THE COLD HARD TRUTH" or "The Best Friend Society" which serve to reflect Elizabeth's own conflicting feelings and her emotions of self-doubt. Growing up, the teenage years are perhaps the most difficult because of these mood-swings and Moriarty conveys these increasingly mixed feelings that Elizabeth has towards others and towards herself in the form of these notes. Additionally, the many tales of Elizabeth's life are told through her letters to Christina, who gradually becomes a confidant and helps Elizabeth to realize that friends, like other things, change as you grow older. And that's okay. I love that this is the theme of this novel - that change, in every way, is inevitable and perfectly alright. We need more books in YA that epitomize this because, truly, no friendship is perfect and long-lasting, as much as we'd all like to believe. When one door closes, another one opens. It really does.

And yet, my favorite part of this story was Celia's own relationship with her mother. Although we see their interactions through colorful and amusing notes stuck on the refrigerator, mostly because Elizabeth's mother is busy so often, it provides a different angle to the classic mother-daughter relationship. I like seeing a mother who doesn't let her single parenthood dictate her life. I like seeing that Elizabeth's mother pursues her passions, but also loves her daughter very, very much. Elizabeth is fiercely independent, but the love and comfort she gains from her mother is still visible. It is a delicate balance to strike, one that becomes more obvious and meaningful as the novel progresses, but it is present and beautiful all the same. All in all, Feeling Sorry for Celia is one of the best contemporaries out there and an unexpectedly honest portrayal of growing up, facing the world, and friendship. 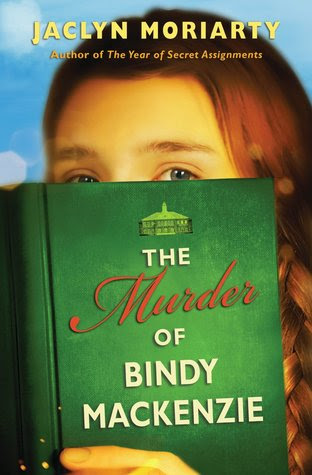 The Murder of Bindy Mackenzie can only be described as a literary delight. Once again, Moriarty's epistolary format not only surprises, but stuns, in its genius. With this installment in the Ashbury/Brookfield Series, Moriarty follows the tale of Bindy Mackenzie, a top student whose life is slowly turning upside down. For starters, she's living with her aunt and uncle while her parents pursue their careers. For another, there's a strange new class called Friendship and Development (FAD) in which Bindy is stuck with the Venomous Seven. On top of all that, Bindy is forgetting her assignments, baby-sitting, sending frantic e-mails to her parents, and transcribing conversations she overhears. With so much crazy going on, there can be only one explanation for Bindy's change in behavior: she's being - slowly - murdered.

Easily one of the highlights of this novel is friendship. When we first meet Bindy, she is quick to judge - instantly disliking the "Venomous Seven" in her FAD class - and goes out of her way to be rude. And yet, as the novel progresses, we begin to see Bindy's side of the situation; of her past and the small actions that have caused Bindy to slowly hate the majority of her classmates. As she works to win them back, though, the friendships formed are ones to look out for. Not only are they achingly realistic, but also heartfelt. Furthermore, it's impossible not to love Bindy. After all, this is the girl who is vying for her parents affections, who sends them long e-mails but never receives any responses. Moriarty manages to weave so much depth into this one piece, all while retaining her humor and light voice.

Sadly, what really prevented me from giving this book a higher rating - despite the fact that I teared up during a scene or two and completely LOVED the growth arc of this novel - was the "murder" plot. We see this really emerge during the last third and while I cannot deny that it is brilliantly woven into the story, never taking away from the depth of the novel and only adding to its enjoyability, it did take away one thing from the novel that I particularly enjoyed. Bindy experiences what it's like to suddenly become so involved in what others think of her and redeem herself to her friends that she often pushes aside her school work. I feel as if this is a very natural direction for many teens to take and loved that Bindy's isolation from everything - even school, which she formerly excelled in - was a part of this novel. Thus, to have it explained away in the end was a bit of disappointment. Furthermore, I wanted more closure when it came to Bindy and her parents. I simply wish we could have seen a greater source of interaction between them. Nevertheless, this is a definite winner. I do think Feeling Sorry for Celia is a slightly stronger story overall - and I loved seeing Elizabeth re-appear in this novel and witnessing the direction her story arc took was enriching - but The Murder of Bindy Mackenzie is certainly a worthy piece of YA Fiction. One of the few out there.