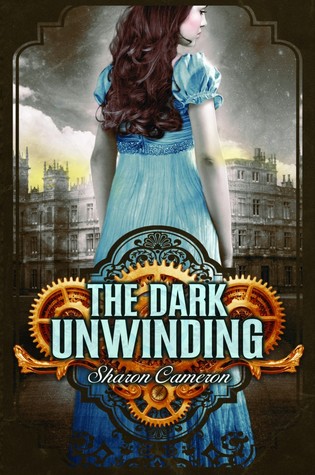 I've waited almost a year to read The Dark Unwinding, but it was a worthwhile wait. It's always a pressing fear in the back of my mind that by holding off on an unfinished series, the hype will cause my expectations to escalate in such a manner that I will be left disappointed when I finally do get around to the book in question. Quite thankfully, however, The Dark Unwinding is the unusual exception to the rule, living up to its hype and more. While I hesitate to label this novel as steampunk - really, it's simply historical fiction with innovations - Cameron't debut is not one to be missed.

Katherine, an orphan since birth, has been saddled with the onerous task of visiting her Uncle Tully - said to be mad - and sending him off to an asylum. Ever since she was young, Katherine has lived with her widowed Aunt Alice - vicious, rude, and greedy - subject to a life of cruelty, injustice, and no love. Thus, Katherine's only plan is to evaluate her uncle's holdings for her fat cousin brother who will inherit it, send her uncle packing to a mad house, and return home to hopefully earn a small amount of living herself. When Katherine arrives at her uncle's home, though, she discovers a budding inventor and genius instead of a raging lunatic. Moreover, the warehouse her uncle has built to work in is a source of livelihood for hundreds of poor men, women, and children. Now, unwilling to give up the secret of this teeming community to her aunt, Katherine is torn between protecting her own interests or those of her uncles. Meanwhile, the insanity that her uncle has been charged with may run in the family after all...in her.

The Dark Unwinding excels primarily because of its characters. Although its plot is sufficiently creepy - strange laughter, sleep-walking, and unseen twists to boot - it is a slow story. Its characters, however, will keep you riveted to the page, unwilling to look away even for a moment. Katherine isn't, at first, an easy character to like. Although we sympathize with her plight, her true nature is never revealed until the novel wears on. Nevertheless, I enjoyed Katherine's narration from the start: honest, conflicted, and emotional. I love a heroine who is able to admit to her own faults, no matter how foolish, and whose courage reveals itself in the unlikeliest of times. Moreover, Katherine's relationship with her Uncle Tully - brilliant, though autistic - is beautifully written. In England, shortly after the French Revolution, autism was thought to be a form of madness and Cameron captures this sentiment perfectly, never painting Uncle Tully to be a perfectly normal human, but firmly steering clear of the label of lunacy as well.

Nevertheless, this book would be lacking without its vibrant cast of secondary characters. Mrs. Jeffries, the cook; Davey, the mute boy; Mary, the lady's maid; Ben Alridge, the handsome man with an interest in Uncle Tully's workhouse; and Lane, Uncle Tully's apprentice. When Katherine first arrives, she isn't given a warm welcome, merely because the people of her uncle's estate know she's there with the intent to evict them. It is a slow and gradual climb, however, to build trust, but ultimately a journey that pays off. Katherine's budding romance with Lane, in particular, was butterfly-inducing. It's the sort of slow-burn romance I crave, filled with understanding and tender conversation. Although the plot of the novel truly only picks up the second-half, the first-half is more than a little entertaining, built with these superb character relationships.

I wasn't expecting such a strong debut, despite the hype surrounding this novel, and while I can't fully claim it's the perfect October-themed read, it's not one worth missing. Cameron's understanding of character arcs is already nuanced, so I cannot wait to see how these relationships continue to grow and develop in the sequel. (A historical fiction duology - YAY!) If you're a fan of historical settings, intrigue, or just a good dose of innovation, then The Dark Unwinding is the perfect addition to your shelves. Cameron's world is one you'll miss; I'm already counting down the hours until I can return.
Posted by Keertana at 12:00 AM