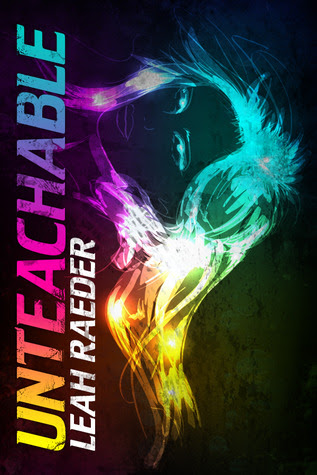 When it comes to Unteachable, I have very mixed feelings. You should know, straight off the bat, that this novel explores a student-teacher relationship, but one done right. Raeder quickly eliminates the sticky issue of rape by ensuring that her protagonist is eighteen and, moreover, she never beautifies the stark reality of this issue. Admittedly, I found this book rather difficult to connect to at first, but as the story progressed, I quickly became engrossed in the lives of these characters, my heart unwillingly giving itself over to them.

Unteachable begins in a carnival. Maise, a teenager suffering under the burden of a drug addict mother, absentee father, and general life-of-suck, meets Evan, a handsome man in his mid-thirties, and the two are drawn to one another; intensely, obsessively, crazily. Maise walks away from Evan, expecting never to meet him again, and is shocked when she sees him in her film class. As her professor, Mr. Wilke. With the sparks still striking between them, the two swiftly decide to start up a relationship, renting a room to stay in over the weekends and being careful to hide their relationship. Although these beginning scenes grate on me, only because of their utter wrongness, I love that Raeder never flinches away from acknowledging the mistakes in their relationship. Both Maise and Evan are at dark places in their life and, somehow, together they are able to cope. This is no chick-lit romance, a-la Colleen Hoover's Slammed. It's not about excessive drama or angst or staying away from one another or even doing the right thing. It's real. It's about the real-life repercussions, but also about the true feelings that blossomed between these two. And, despite the age difference, despite the built-in illegality of the issue, Raeder makes it feel so right.

Naturally, the romance is Unteachable is all-consuming and passionate, a full-out roar of fireworks and the messy ashes left behind. Its characterization, though, is also spot-on. Maise is a swirl of emotions, fragile and hurting under her strong veneer. If nothing else, Raeder truly captures the broken mother-daughter relationship in this novel. We see the effect that growing up alone has had on Maise; never having a mother to rely on and always having to fend for herself. It makes her self-reliant, stubborn, and unwilling to trust others, but these barriers are slowly worn away as the novel progresses, giving us a wonderful growth arc. In addition to Maise, though, Evan, too, broke the mold. Not only is he kind, truly caring for Maise and putting her before him, but he manages to be sexy without being an alpha-male. Unteachable is the first New Adult novel I've come across that doesn't feature an all-controlling, bulky alpha-male. And what a breath of fresh air this is. Evan comes with his own baggage - naturally - but despite all the cards against him - his age, his profession, his willingness to engage in a forbidden relationship - he still managed to win me over with his genuine affection and real tenderness. Who knew nice guys could be swoony too?

And still, my favorite aspect of this story is the fact that it captures exactly what I want New Adult to capture: messy relationships. Not only Maise's relationship with Evan or her mother, but also her friendships. With her background, Maise has been on her own for too long, so her complicated relationship with her one and only friend in this novel was charming in its realistic arc. I love that Raeder doesn't hesitate to touch upon subjects such as college or even go into the life of drugs that Maise lives in; the fact that this novel is not solely a romance makes it stand out from the crowd. Moreover, the writing is sublime. Raeder writes this novel in past tense, with Maise telling the story to the reader from a distant future in which she looks back on these events and drops cryptic hints every-so-often. Usually, this form of narration bugs me, but it worked perfectly in this scenario.

For all its plus points, though, Unteachable is not a perfect novel. I found a handful of minor plot lines to be over-exaggerated towards the end, the villain veering off the track of gray and into the disappointing territory of black-and-white. Additionally, the middle portion of this novel was...tedious. Essentially, it's a string of sex scenes, most of which could have been cut out without batting an eye. Nevertheless, despite its flaws, Unteachable is the best student-teacher relationship I've read and one of my favorite New Adult reads, right up there with Holier Than Thou and Fangirl. And, coming from someone who makes it a point to steer clear of all New Adult novels, that's high praise indeed.
Posted by Keertana at 12:00 AM