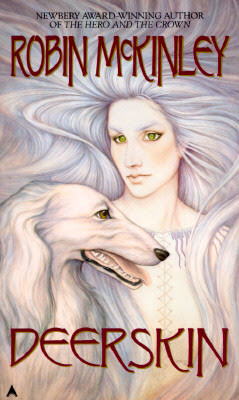 I genuinely feel at a loss for words when it comes to Robin McKinley, not because her work inspires speechlessness, but rather because it doesn't. After finishing The Blue Sword last year, I realized that much of McKinley's charm was lost on me. I found one of her best pieces of work to be dull and in need of desperate polishing. Thus, I didn't really intend to read Deerskin but the premises sounded too intriguing to pass up.

A beautiful princess, largely ignored for much of her life, comes to the attention of her father, the King, after her mother passes away. The Queen, known to be the most beautiful woman in all the Seven Kingdoms, makes her husband promise not to marry a woman who is of lesser beauty than she, which shockingly causes the King to announce his intentions to marry his daughter, just two years later. After beating and raping her violently, leaving her for the dead, the King leaves Lissra to her fate.

But she survives. And as a survival tale of courage, this book excels. Lissra is poignantly written and her brutal rape is delicately handled. Furthermore, despite its darkness, I enjoyed this tale. It is beautifully written in a gripping, fairy tale style, and the relationship between Lissra and her faithful companion, the dog Ash, is beautifully depicted. Even the eventual romance with the plump, but kind, Prince Ossin is sweet. I was willing to forgive the slow passages in-between in favor of a 4 Star rating as well - that's how well this book was shaping up - but it seems I am doomed to give McKinley's novels no more than a mere 3 Stars.

Unfortunately, where this book lost me was in Lissra's ultimate healing. While her mind buried the events of her past and she gradually came to know the truth, I was disappointed by the heavy guidance of a magic that dictated her actions. Lissra finds help in the form of the Moonwoman who heals both her mind and body, but throughout the story - and especially during those last scenes - the Moonwoman helps Lissra to confront her father. For me, this lacked the strength of Lissra's own courage and will to stand up to her oppressor.

Additionally, the romance that gives Lissra a new life was paced slightly abruptly. I found that the line between trust and love, friendship and romance, was drawn too faintly and that jump made far too quickly. I cannot deny, however, that Deerskin is a beautiful novel. For once, I have no real qualms with McKinley's writing and have come to admire the deft manner she dealt with the more complex issues in this story. And yet, no matter how much I wish to embrace McKinley as a fellow fantasy lover, I seem unable to fall in love with her books. Maybe Beauty or Rose Daughter will change my mind yet. 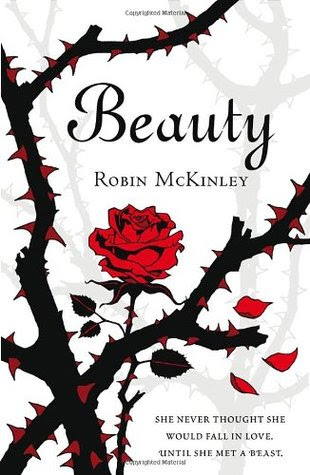 I'm hesitant to call Beauty a re-telling of "Beauty and the Beast" as it's not so much a re-telling as it is a telling. McKinley's rendition of this classic fairy tale not only fails to veer off from it's typical path, but it also - sadly - fails to capture much of the magic of the original tale as well. I half expected my Kindle to burst into song or for "A Tale as Old as Time" to suddenly play out of thin air, but I fear I enjoyed even Disney's telling of this tale more than McKinley's.

From the surface, there is nothing egregiously different about this story from the classic "Beauty and the Beast" tale. All the usual elements are present - Beauty willingly goes to live in the Beast's castle, the Beast slowly wins her heart, and the spell of bestiality is broken. With such a simple formula, it seems impossible to really fail; and McKinley hasn't. I cannot deny that her writing is lush and gorgeous, the magical enchantment strangely enticing, the interactions between Beauty and her Beast unerringly lovely. And yet, I feel as if the fault of this novel lies in its perfection.

Most notably, to me at least, is the utter humanity that seeps through the Beast. After a two hundred year imprisonment, this is - oddly enough - not a man to lose his temper or give in to any of his bestial traits. In fact, he is always the perfect gentleman, which essentially makes him a bore. Either than a small temper tantrum that is mentioned - not even witnessed - Beauty is given no reason to dislike the Beast. Not only is he kind and caring, but he provides Beauty with every comfort, including companionship. Of course Beauty falls in love with him - what's not to love? With this fairy tale, appearance is the only obstacle to cross, which takes away from the depth of this classic story. Beauty never has to tame the Beast, as she so bravely announces in the first part of this novel, so their love story is disgustingly sweet and a complete bore as well.

Beauty herself is also another paragon of perfection. When confronted with sending her father to his death or willingly venturing into the Beast's lair - one where, rumor has it, he eats humans - she quickly volunteers to go and swiftly begins to enjoy her time spent in the enchanted castle. Although she is described as being studious, she is disappointingly dull and never curious at all, which works well for the story, but not so much for her characterization. Furthermore, while Beauty is forced to defend her Beast against her family's opinions, they all come together in the last few pages for a typical happily-ever-after without the surprise or wonder of seeing Beauty's Beast transformed into a man.

Unfortunately, the more Robin McKinley I read, the more I am convinced that the rest of the world is seeing something I am not. I think McKinley is an extremely talented storyteller, but as an author, she manages to nearly always fall short of my expectations when it comes to characterization and development. Is Rose Daughter a sad repeat of Beauty? I suppose I'll find out, soon enough.

Reviewer's Note: I did, in fact, read Rose Daughter, but I failed to review it as my qualms with it and with Beauty were nearly identical. Ultimately, it seems McKinley is not an author for me. :/
Posted by Keertana at 8:23 PM