ARC Review: This Song Will Save Your Life by Leila Sales 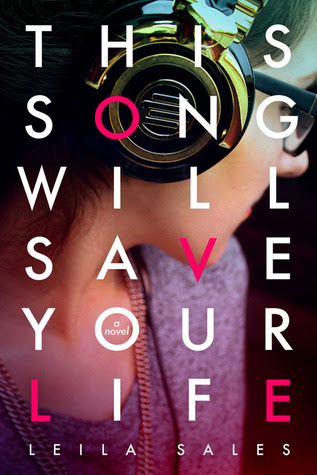 Title: This Song Will Save Your Life

I’ve written a lot of difficult reviews over the past year, but there has never come a point where I planned to just give up and screw the review because I just couldn’t do it. And then, of course, I read Leila Sales This Song Will Save Your Life and it punched me right in the feels and brought back so many memories and left me a total wreck. I still don’t know how to write this review. I don’t think I can do justice to this book. I just hope that, no matter what, this book gets the attention it deserves. Because, in case you couldn’t already figure out, TSWSYL is life-changing.

Leila Sales latest is a dark novel, but an important one. “How do I fit in?” I think it’s a question we’ve all asked ourselves at some point or the other. Growing up, I didn’t actually have a lot of friends. I moved to when I was seven and, suddenly, I just didn’t have anyone. I had a tight circle back in , but here I was suddenly an oddity. I was too smart. I was too plump. My mom braided my hair in pigtails which was just too weird. I used phrases like, “I was pulling your leg,” which just wasn’t cool. And still, I’d charge forward to school everyday for three years until I found someone – my best friend – the first person to accept me for who I was. I was lucky this was before middle school. I was lucky I realized that it was absolutely okay to be just who I was in life. I was also extremely lucky that the only time I ever considered suicide – last summer – I was too terrified of blood to actually go through with it.

Elise, however, wasn’t that lucky. Elise has grown up knowing she’s different and although she spends an entire summer trying – desperately – to change herself; to learn all the latest bands, to wear all the latest clothes, to do everything right, she still manages to miss the mark. And, suddenly, it’s all too much for her to bear. TSWSYL is the perfect coming-of-age novel, exploring what it means to have no one, be no one in anyone’s eyes, and still discover a group to fit in. Sales, first and foremost, is spot-on with her characterization of Elise. I connected with her from the first page – heck, I spent all my summers teaching myself something or the other, whether it was Hindi or all about paleontology or just about bird-watching - so seeing Elise come to the realization that learning for the sake of learning wasn’t a social plus point, just like I did myself many years ago, was like walking back down memory lane.

And yet, Elise manages to be a teenager of her own nature too. While she has distinct qualities that many readers will connect with, I also love that she’s fiercely independent in her quirks, her love of music, and especially her relationships with her parents. I feel as if Sales hit the nail on the head with Elise’s parents. Ultimately, as much as we all wish our parents could help us find friends and get through life, they can’t. Not always. Thus, Elise’s bonds with her divorced parents are messy and complicated, full of unsaid words and lost emotions. Yet, despite all that, the affection Elise has for them and their understated pride of her accomplishments is felt so palpably through these pages. I don’t think there is anything I love more than an author who is able to convey feelings without explicitly stating them and those waves were exactly what I got with this novel.

TSWSYL really picks up, plot-wise, when Elise discovers an underground club and soon learns to DJ. Already her love for music puts her in an ideal spot to fit in with the crowd, but her personality soon earns her many friends as well. Vicky, the carefree girl Elise first meets at the club, soon becomes a close friend and seeing their friendship evolve – awkwardly, slowly, but surely – was such a heart-wrenching bond to watch unfold. I sometimes like to think there are two types of books in the world: those with horrible, no-one-wants-you-here best friends who push the protagonist toward asshole guys or ditch them during a time of need or completely don’t care and those with the what-would-I-do-without-you girls who stick up for the heroine and slap away the assholes and sometimes do that to the hero too when he’s being a dick. Thankfully, TSWSYL falls into the latter category – for sure.

As far as romance goes, I can’t say this book has a lot. Or, rather, let me re-phrase that – this book doesn’t have a typical romance. And yet, it is much more realistic than any other romance I’ve read. Char, the current DJ at the club Elise discovers, soon teaches her how to DJ and becomes more than just a friend to her. Both Char and their relationship have an almost ethereal quality to it, being difficult and complicated, but coated with a veneer of ease. Char is much older than Elise, which gives their romance a very different angle and dynamic, but also makes their relationship much more rewarding in the future. Elise’s growth because of and due to this love story is what I ultimately loved about it, so added to its originality, Sales manages to stun yet again.

TSWSYL will probably not be as personal an emotional journey as it was for me, but regardless of that fact, it is an incredible novel. It is filled with unforgettable characters, even more stuck-in-your-head music, and wonderful depth. Utterly moving, deeply touching, and poignant, this is not a book that will leave your thoughts for a long time to come. Leila Sales, you are my hero.
Posted by Keertana at 6:45 AM