ARC Review: All the Truth That's In Me by Julie Berry 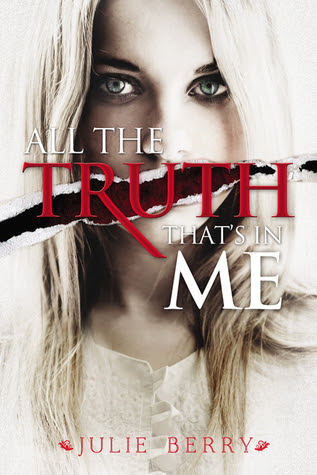 Title: All the Truth That's In Me

4. Maiming & Disabilities
I recently read this incredibly detailed post about diversity - or the lack of it - in YA. And while All the Truth That's In Me doesn't necessarily involve non-white characters, it does feature a protagonist who is maimed. Judith's speechlessness is derived from her own physical barriers, unlike most heroines, which makes this novel fall into 2.9% of novels in 2013 with disabled characters. Normally, this fact would probably remain rather unremarkable. After all, many novels feature secondary character with disabilities and, either way, Judith's inability to speak is an enormous plot device. And yet, Berry truly give this issue so much more depth. Not only does Judith work at regaining her ability to speak fluently, but she feels - constantly - the unfairness of her circumstances.

"Will I help him make something of his life? Who will help me? Why does everyone presume that I, as damaged merchandise, forfeit any claim to happiness? That I expect nothing, have no ambitions or longings of my own? When was it agreed that my lot would be to gladly serve as a prop and a crutch for others who are whole?" (Berry, 53%)*

Instead of her disability making her the center of attention, Judith is pushed into the very corners of thought, her silence taken for granted as acquiescence. Essentially, her speechlessness makes her come across as a woman with no thoughts or opinions of her own. I love that Berry touched upon these ideals, only because they weren't ever ones I would have considered and this is precisely why I read: to be introduced to new ways of thinking.

5. A "Pinhole" Plot
I've heard this novel being described as a "pinhole" one, or one in which the entirety of the story is revealed as the book wears on. Well, let me tell you now, these "pinhole" methods never work for me. Never. I have no patience for authors who tantalizingly dangle answers just out of my grasp, so color me surprised to find myself flipping through the pages of this novel gleefully - "pinhole" storytelling and all. What Berry does, that most authors don't, however, is reveal pieces of information in a timely fashion. It is evident, from early in the story, who Judith's kidnapper is. And yet, the full details of her ordeal are never revealed until the end. Instead, small flashbacks litter the narration, working beautifully to weave mystery and thrill into this otherwise seemingly romantic tale. While I remain a fan of the slow, languid prose used in this novel, not to mention the character-driven plot focus, I am sure that not all readers will agree. And yet, I felt as if these purposeful decisions only worked to strengthen the plot, making us care for these characters and drown in seas of emotion. I know that by the end of this book, I was gripping the edge of my chair, unsure whether or not to laugh or cry or scream. And I love that build-up of tension, that slow unraveling of mystery, and the eventual - realistic - conclusion of a well-told tale.

All the Truth That's In Me truly hit all the right notes, at least in my book. Not only did it take a myriad of challenging qualities (see above) and make them work, but it also took the essentials I look for in a good story - characters with depth, thriller plot lines, and emotional undertones - and excelled in those areas as well. While I've never read any of Berry's past novels, you can be sure that I will - eagerly - be checking out her future YA works. After I own this beautiful hardcover on my shelves, that is.
Posted by Keertana at 12:00 AM