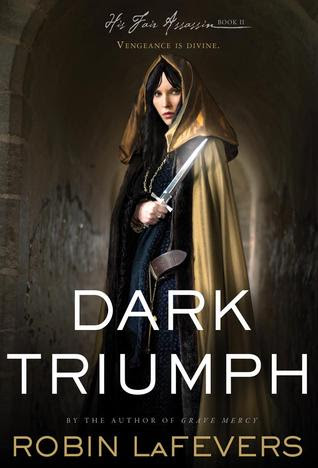 Where Grave Mercy was a lie, a novel about dancing and political parties deftly wrapped up with a bow-tie of kick-ass assassin-nuns that never assassinated, Dark Triumph is more of the dark, bad-ass story I was looking for with LaFevers's debut last year. Nevertheless, while Grave Mercy was a sore disappointment, I am glad to admit that Dark Triumph completely won me over. It seems to be the case this year that series I swore off of last year have come back to haunt me, making me eat my words with my utter love for their companion novels. It happened with Scarlet and it has happened again with Dark Triumph, so to any other companion novels out there? Come at me! ;)

Dark Triumph takes place in the same historic setting Grave Mercy was placed and the writing isn't significantly different either. Instead, what makes this novel so much better than its predecessor is that it is actually about assassin-nuns. Sybella is an experienced killer, but also the daughter of the evil Lord d'Albert, sent back to his home with the promise of extracting revenge upon him. Once within the castle, however, Sybella is thrown sharply back to her dark life, watching as friends are slaughtered ruthlessly by her father and forced to give into the wishes of her half-brother Julian who has become a lover instead of the childhood protector he once was. When Sybella receives orders to free a prisoner in the dungeons, the revered Beast, she resolves to exact her revenge on her father at last, all while freeing his most valued prisoner. Life, it seems, has slightly different plans for Sybella...

What makes Dark Triumph such a success for me is Sybella. Although the layers behind Sybella's dark past are artfully revealed as the novel progresses, it is evident from the beginning itself that she has lived a brutal life. As a woman, there is little use for her in her father's household and despite successfully dispatching of his allies, she longs to put an end to the man who has made her life a living hell. Yet, through these conditions, she perseveres. While her faith in Mortmain wavers at times, her courage and strength never does, making her an inspiring character in the way that naive, dancing Ismae never was. Furthermore, Sybella doesn't fear death or murder. What she fears is the spreading evil of her own family and her cursed existence as a d'Albert herself, but all this only makes her a far more full-fledged and hurting character than we imagine. As the full story of Sybella's past comes to light, it is only with awe that we can chart how far she has come, even from the  beginning of the novel.

Along with Sybella, though, the slow burning romance she shares with Beast is one to behold. Both Sybella and Beast share a love for killing, but they retain their humanity in a way d'Albert fails to. What makes their bond so strong, though, is the fact that Beast sees Sybella for who she is and never tries to stifle her. While the other men in Sybella's life mold her into what they want, Beast accepts Sybella as she is with her assassin skills, dark past, and treachery. Granted, he yearns to protect her, but he also knows that Sybella is more than capable of protecting herself - and he lets her. Although Beast has a large, scary, scarred, and ugly appearance, he is a complete softie inside and lacks the alpha male tendencies that make me roll my eyes. All in all, it's safe to say I've fallen for him - quite hard.

What prevents me from giving Dark Triumph a higher rating, however, is the fact that a solid eighty pages could be cut off from the beginning. Folks, it takes a long time to get the ball rolling on this plot line and it is wholly unnecessary. While it does shed much light on Sybella's past, I feel as if the same effect could have been achieved with a fewer number of pages. Additionally, Dark Triumph is one of those rare instances where I recognize that, technically, a book contains no flaws but a slight lack of connection with it yields to a lesser enjoyment of the book. I'm not entirely sure why I didn't enjoy the novel as much as I hoped, mostly because I liked it, but my enjoyment of it hovered on just mere like opposed to really enjoyed. Not sure why. I suspect it may be because of the first few chapters or even because the political scheme which was more war-related - which I really liked, mind you, but which did take away limelight from the characters on more than one occasion. Even the writing, at times, could be a bit off-putting in certain scenes, so all together, I did not wholly love this book.

Nevertheless, Dark Triumph is, as far as I'm concerned, a triumph when it comes to a solid sequel and I find myself eagerly looking forward to Annith's story next. If I'd found myself saying that last year, I would have been sorely surprised, but at this point, I am ready for more pleasant surprises to come my way.
Posted by Keertana at 12:00 AM