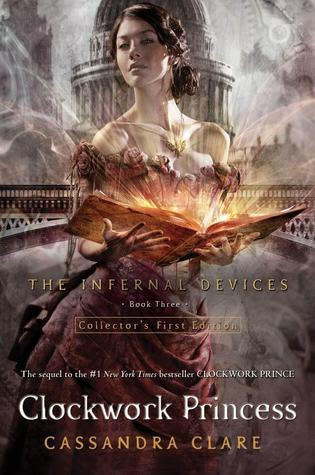 For some reason, it is always easy to write a review for a book you dislike. When you have to write a review for a book you love, the words don't come because too much of it is feeling and less of it is tangible though. For a novel you dislike, though, the snark just flows without thought. Unfortunately, this doesn't apply for a book that gutted you, leaving you bitter and disappointed in the end. Just like novels that you hold dear to your heart, stories that upset you leave behind more emotion than what can be expressed with words. As such, I hope you will forgive me for this review. I fear it may ramble, it may deviate from the topic at hand, and it may leave many fans of this series shaking their heads at me. Sorry.

I suppose the best place to start at is the beginning. Shortly after finishing Clockwork Prince and giving it 5 Stars, I more-or-less made a decision to not pick up any more of Cassandra Clare's novels after Clockwork Princess. I had read - and loved - the first three books in her Mortal Instruments Series, but after CoG, I refused to continue because I loved the ending of CoG too much and, frankly, could not take the drama. After CP, I began to realize that the majority of Clare's future works were all similar to her previous ones and I was quite convinced that she didn't have too much more to tempt me as a reader. Yet, I was ecstatic for the release of CP2.

Like every other fan out there, I theorized and pored over both CA and CP until I was certain that the ending could go only one possible way. Until I was sure it had to play out either like this or like that with no leeway in the middle because, surely, anything else would ruin the series. I suppose then, in some ways, I have only myself to blame for the crushing physical pain I felt after finishing this book. Clockwork Princess disappointed me in the worst of ways. Although it contained Clare's tell-tale wit and humor, her classic writing style that flowed beautifully, and her usual depth of character, it failed to charm me.

Objectively speaking, CP2 does everything a good finale should do. It ties up the loose ends alluded to in the previous two novels perfectly, it leaves us without any lingering questions or doubts, and the romantic entanglements are all cleared up. Nevertheless, after the half-way mark of this book, something happened and slowly - very slowly - everything began to fall apart. Although I had cracked open the spine of CP2 and was enjoying it, my mind began to drift after awhile. While everyone else was clamoring about their emotional upheaval, I was reading, calm and cool as a cucumber.

After the half-way mark of this book, it began to both get better and worse. What I loved about CP2 was the fact that it shifted to the third-person perspectives of other characters. Although Gabriel, Gideon, Cecily, Charlotte, Sophie, and Henry had always been important characters, they never got their own spotlight to shine in - until now. All of their individual story arcs came together beautifully and CP2 surprised me by giving me a strange amount of emotional attachment to the Lightwood brothers. In fact, if it wasn't for the perfect balance of depth and action that was present within these secondary characters, I suspect CP2 would only garner one star from me.

Ultimately, what really went wrong were the characters themselves. It felt as if, all of a sudden, they had all just gone mad. I found myself flipping back to check that I hadn't accidentally pre-ordered some strange new version of Alice in Wonderland where Mad Hatters reigned supreme and was, in fact, reading CP2. Will, Tessa, and Jem are characters we have been with for the past three years now. We, the readers, know them inside and out just as well as Clare herself probably does. We remember their words, their actions, their anguish, their pain. Thus, to have them disregard much of what makes them uniquely them - for them to brush aside certain personality traits and perform actions that they would have normally never performed - was shocking.

Clockwork Princess disappointed me because its main characters behaved out of character. If you don't believe me, then just re-read Clockwork Prince and make a list of things that Will, Jem, and Tessa would never do to each other. Actually, just make that list after reading half of this novel. After that, you can proceed to watch as they do all of those actions, which essentially disregarded their respect for each other as well as mine for them. Without giving away spoilers, it is difficult to elaborate on this point any further, but just know that the main characters took decisions in this book that they would have never taken because of honor, respect, and pride. For me, the fact that they made those decisions was surprising more than anything else and, from there on out, the rest of this novel, particularly the ending, seemed too unrealistic for me to wrap my mind around and fathom.

Veering away from the love triangle temporarily, I have to admit that I was expecting a little more of a mind-blowing revelation from Clare. Yet, that being said, the ultimate explanations, although not wholly surprising to me, were still satisfactory and the final showdown, despite being one I wouldn't hesitate to label as "lame", was still excellently written. In all things concerned with plot, CP2 does not disappoint. We find out just who Tessa is, what her abilities are, how she came to be, all the manner in which we find out is all very cleverly revealed throughout the course of the novel.

As such, the only real complaint I had with this book seems to be the love triangle. For me, the unrealistic actions of the main characters in turn made this love triangle turn out to the way it did. I have no qualms about who ended up with who, but the very fact that it was unrealistic, that the epilogue raised more questions than it answered, that I found myself doubting all the traits I'd pegged on these selfless friends...all that just made me bitter and upset. I will admit, though, that CP2 brings to light the depth of the bond between Tessa, Will, and Jem and, in some instances, this was handled very well and with emotion. For the most part, though, I can't say I was satisfied at all.

Maybe I'm a cynic, so I'd warn you all to take my review with a grain of salt. A few. Nearly all of my most trusted friends have loved this and I am thrilled for them - I wish the same on every other reader who opens this book. I hope CP2 is the type of action-packed and emotional ending you all hope it is because, to be frank, disappointment is a terrible feeling. Although I'm done with this trilogy - and with Cassandra Clare, too, I presume, unless she writes something set out of this universe - the joy and love of reading is one I am not finished with. CP2 leaves me feeling as if I should avoid all love triangles - which I will - and all trilogies - which I might - for as long as I live, but I cannot disregard that these characters will stay with me, the way I remember them best, from CA and CP.
Posted by Keertana at 12:00 AM