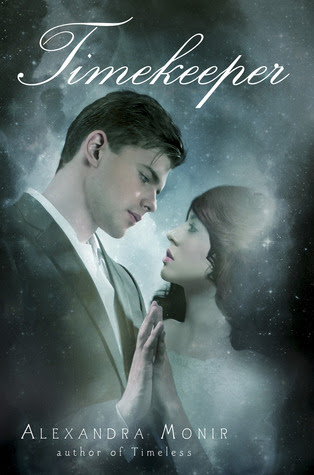 When I give a book three stars, it simply means indifference; I enjoyed it, but ultimately, it is a forgettable read. Thus, I am unable to remember why I picked up Timekeeper in the first place when its predecessor, Timeless, was equally as unremarkable for me. I suspect it has something to do with that cliffhanger ending and possibly my thirst for more historical fiction in YA. Whatever it may be, I read Timekeeper in a matter of hours, skimming through this short story and enjoying it, knowing that fans ofTimeless would be more than pleased but also knowing that, unlike most, Monir hasn’t improved greatly as an author or a storyteller from her debut piece.

Timekeeper picks up directly where Timeless left off, with Philip Walker, the man Michele fell in love with decades ago, somehow finding a way back to Michele’s present-day existence. In an unlikely turn of events, however, Philip remembers nothing of Michele. Yet, as much as Michele desperately wants Philip to remember her, a new evil is on the horizon. A spirit from the past, one who holds a grudge against her and is responsible for all the wrong in Michele’s life, has made a new plan, one that will kill her, for Michele is the product of a human from the present and one from the past and really shouldn’t even exist in the first place. As Michele races against time – once again – and fights for her love, she comes to know about who she – and her father – really are and ultimately embrace her abilities as time traveler.

I have to give Monir props by making this duo one with such an interesting set-up. As an avid fan of Doctor Who, I love time travel stories and Timeless definitely wow-ed me in that sense. Its time travel theories were impeccable and the rich history of the Gilded Age that colored every page kept me riveted. WithTimekeeper, on the other hand, Michele doesn’t do as much time traveling as she does reading the pages of her father’s journal, coming to learn who he is and uncovering an organization dedicated to time travel. In my eyes, all these new rules and regulations that were put place by this time society took away from the thrill and excitement of the time travel element previously present in the novels. Furthermore, I found myself missing Michele’s actual adventures in the past and while her father’s voice through his diary entries was unique and recognizable, it wasn’t as riveting as it could have been, causing me to skim the pages quite a few times.

In addition to that, the romance element was dealt with in a very unique manner. Philip Walker, the new kid in Michele’s school, feels something for Michele, but he fails to remember their past. It was sweet to see them nearly fall back in love with one another, joined by their love for music, and while the semi-insta-love inTimeless clearly bothered me, I was less concerned about it in this story. I will say that the ultimate reason to explain Philip’s presence in Michele’s world is a little far-fetched, though believable. It requires a little suspension of belief, although it does make complete sense, so I was a little skeptical, but pleased, and the ultimate conclusion of this romance.

What make Timekeeper a novel that is forgettable, though, is that it builds up to an obvious confrontation with the villain, only to solve it with a small action that renders this novel practically pointless. If it was so easy to kill the villain, why not do it years ago when Michele’s life wasn’t in danger? Plus, the story ends off very neatly, but I would have liked something more to see how Michele dealt with her newfound responsibilities, not to mention the fact that her friendships which I so adored in the first novel took a backseat in this one. Timekeeper is a very short story, which is why I read it in the first place, but it really isn’t a series I’d completely recommend. It’s enjoyable, interesting, and the concept is intriguing, but more than that, this series unfortunately does not have to offer.
Posted by Keertana at 12:00 AM