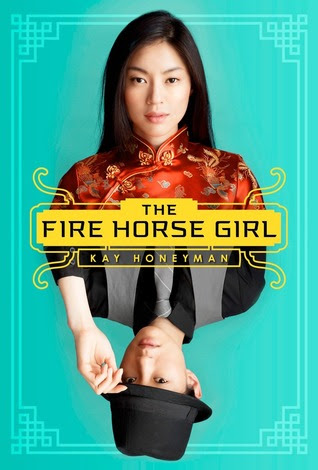 Title: The Fire Horse Girl
Author: Kay Honeyman
Rating: 4.5 Stars
When it comes to debut novels, I’ve begun to shy away from books. Without naming any names, debut novels more often than not prove to be massive disappointments for me. Of course, they all have gorgeous covers and thrilling synopses, but the ultimate execution of their plots falls disastrously flat. The Fire Horse Girl, however, is one of those few debuts that truly puts every other debut novel to shame. Although I constantly complain that there is a dearth of good historical fiction out there for young adults, if that means that gems like this novel and Code Name Verity crop up every so often, then I won’t be complaining any longer.
Jade Moon, the kick-ass protagonist of this tale, is the type of heroine I want to put on a poster and worship. Seriously. When her story begins in , she is seen as a detriment to her family. As a girl born under the sign of the fire horse, her stubborn nature makes her ill-suited to the quiet role she is forced to play as a woman in . When Sterling Promise, a stranger claiming to have a way to transport Jade Moon and her father to , the land of opportunity, arrives in their quaint farm in , Jade Moon’s life is turned upside down. Now, she must brave the questioning officials in and somehow make it to to fulfill her dreams and escape the constricting laws that bind her in to a life of household work and silence, even if it means forsaking the only life – and love – she has ever known.
What makes The Fire Horse Girl such a remarkable novel is, first and foremost, the amount of research that has gone into crafting it. As a history-buff, I was thrilled to find that the portrayal of Chinese immigration into was both accurate and authentic. It never ceased to amaze me with what description Honeyman could depict the situations of these hopeful immigrants and the stark contrast between their dreams and reality was sharply felt through the adventures of Jade Moon.
Furthermore, although it is a sad fact of history that women were treated inferior to men, the men in The Fire Horse Girl embody this ideal perfectly without losing their depth. Instead, Honeyman enables us to clearly understand the rigid laws of Chinese culture that have been prevalent for centuries and contrast them with the only ideals that men, even in , know how to live by. As a woman, and even a little bit of a feminist myself, I was very impressed with the care taken to contrast the role of gender realistically, both in and . If you enjoyed novels such as Eon by Alison Goodman, then here is yet another story that is bound to make you contemplate and reflect upon the role of gender, even in the society we live in today.
The actual story of The Fire Horse Girl itself is told masterfully. It is nearly impossible to set down once you’ve picked it up and the writing will transport you from , to a difficult journey overseas and finally to the bustling Chinatown of California. As a character, Jade Moon is both defiant and vulnerable, proving to be a protagonist that is easy to root for, but also easy to understand and sympathize with. I loved following her on her journey to self-realization and while the adventures she got herself into may have been a little too conveniently resolved, they served their ultimate purpose. Moreover, with each part of Jade Moon’s ordeal to reach her dreams in , she uncovers something new about herself. I found the pacing of this to be perfectly timed and the seamless manner in which her depth was incorporated into the novel, without ever slowing down the plot or taking away from the rich cast of secondary characters, was simply fantastic.
Jade Moon aside, the other major player we have in this story is Sterling Promise. I appreciate the difficulty that went into crafting a character like Promise, merely because it was difficult for both Jade Moon and the reader to have a full grasp on his true intentions. It is clear from the very beginning that Sterling Promise and Jade Moon don’t get along – even from their signs of a fire horse and a snake, they are doomed to clash. Yet, as Jade Moon gets to know Sterling Promise more, she uncovers that despite their difference in society, primarily because of their gender, they both have more in similar than they think.
Although their romance is a bit unconventional, I found that I fell for it rather quickly. , much like , is a country of arranged marriages and, as such, while love doesn’t happen quickly, a strong attachment can. It is this that Honeyman conveys so perfectly with her two main characters in this story and I loved that despite the romance prevalent throughout the story, it was muted in favor of Jade Moon’s journey to self-realization in a foreign country and, furthermore, it never clouded Jade Moon’s motivations or goals. Instead, the romance is merely a contributing factor to the fluidity of this tale and adds to both the personalities of Jade Moon as well as Sterling Promise.
All in all, The Fire Horse Girl is a novel I cannot recommend enough. Not only will it transport you into another time period, era, and culture, but it will gift you with incredible friends in its characters – ones that are utterly unforgettable. Furthermore, the subtle plot twists will keep you guessing till the end, the secondary characters will make you wish they had stories of their own, and the ending will leave you smiling, wanting nothing more than to travel to Chinatown and re-immerse yourself in this world. It really is just that good.
Posted by Keertana at 12:00 AM