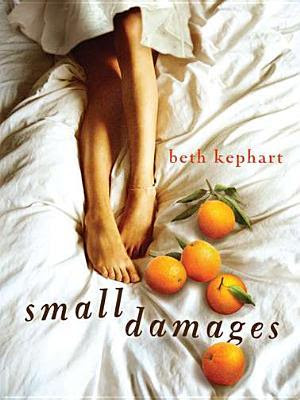 Small Damages is a quiet tale, filled with a languid prose that not many readers will enjoy. It reads practically like a verse novel, for its lines are so very poetic, but at its heart, it is a story that cannot be explained but one that can only be felt. Admittedly, I didn’t expect to enjoy Small Damages as much as I did. It is a story of an eighteen-year-old girl, Kenzie, who is sent to to give birth to her child so as to save her widowed mother the shame of dealing with a pregnant daughter. Yet, although Small Damages deals with teenage pregnancy, an issue I’ve always seen as been very black-and-white, more than anything else, it is a coming of age tale of finding yourself and learning what you truly want from life.

What makes Small Damages such an impactful novel is, first and foremost, its prose, but also its general story arc. It starts out with Kenzie staying in , living in a house with Estela, a hardened old cook, and Esteban, a quiet boy who has a way with birds and horses. Kenzie is in to give up her child to a family that desperately wants one and to spare both her mother and boyfriend from having to deal with what has happened to Kenzie, especially as she refuses to abort her child. Kenzie is a quiet heroine, strong in nature and contemplative in spirit. Unlike the kick-ass heroines who grace the pages of adventure novels, bravely slaying beasts, Kenzie tackles her inner demons, a journey which I find infinitely more powerful than any other.

is the setting of our story and through Kephart’s writing, it comes alive through the pages. You see, reading this book feels much like living in yourself, eating the foreign food, smelling the earthy smells, and seeing the cultural aspects that make it a unique nation. As such, Kenzie’s experience in is felt all the more vividly for the setting of her story plays an important role throughout the novel. Kenzie, too, is a heroine we cannot help but sympathize with. Over the past year, she has lost her father, the one person in the world she was ever close to, and her mother has insisted on moving on, shoving her father’s things into remote locations in the house, pretending as if he never existed.

It is then that we see Kevin, Kenzie’s boyfriend and the father of her child, appear and help her through her rough times. It is him and her close circle of friends who are always with her, supporting her, and better than anyone else, Kevin knows what Kenzie needs even without her having to say it. But, when it came to the issue of Kenzie’s pregnancy, Kevin, bound for Yale in just a few months, refused to come with her to . Now, alone in a foreign country with a cook who is harsh and a boy who won’t talk, Kenzie is lost, confused, and feels unloved. It is only her baby which keeps her going, keeps her putting one step in front of the other. Although it is very subtle, this bond of mother-child is gently built up throughout the novel, making even teenagers feel the wonder of what it is like to have a child, despite never having been pregnant.

Nevertheless, despite all these beautiful qualities, from Kenzie’s personality to the scenery to her slow bond with her child, what makes Small Damages the novel it is are its characters. As the story wears on, Estela slowly opens up to Kenzie, becoming the mother-figure she always wanted but never had. Estela has a brutal past of her own, filled with unrequited love, but she is a strong figure, indomitable in her strength and a constant pillar for Kenzie to lean on, unlike her mother ever was. It is their relationship that truly spoke to me the most. In addition to Estela, Kenzie forms an interesting bond with the surrogate mother of her child. Kenzie, insistent on meeting who will be the eventual parents of her daughter, must now also come to terms with the idea of giving up a part of herself – a part of her father, who she so desperately loved and misses – to someone else entirely.

Small Damages is an extremely thoughtful book. In it, Kenzie is forced to think about what she wants from life – her mother’s understanding, her boyfriend’s support, or something else entirely – but along the way, she finds people whom she can trust, more than her own friends, and who trust her, more than her own family. In other words, Kenzie finds a place to belong in and that, in my eyes, is where the true beauty of this tale lies. Of course, there is a very gentle romance, first springing up as a mutual friendship between Esteban and Kenzie, but truly, I hesitate to call it love. It is something special for sure, but more than that, it is a feeling. Kephart has written a novel where the word “love” is never necessary because you can feel the palpable affection so clearly. In fact, her whole book is like this – one feeling after another, meshing together to make a collage that looks, surprisingly enough, like life and the beauty it holds.
Posted by Keertana at 12:00 AM