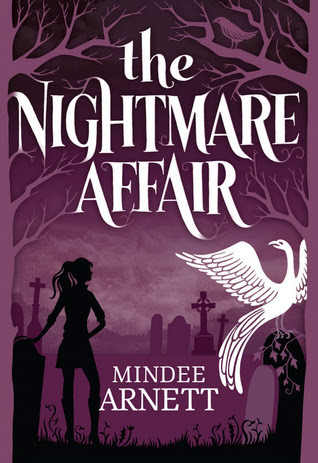 From first glance, Arnett's debut seems to have a lot going for it. An eye-catching cover? Check. Gorgeous title fonts and imagery? Check. A fascinating new idea? Check. Unfortunately, however, The Nightmare Affair is - no pun intended - a nightmare to read. While it starts off promising enough with a unique premises, it soon deteriorates into nothing more than a stereotypical paranormal mystery, riddled with a Hogwarts-eque boarding school and topped off with silly, unrealistic dialogue and characterization.

The Nightmare Affair starts out well enough, grabbing the reader in from the first chapter itself as we are introduced to our protagonist, Dusty, and her nighttime duty of gracing humans with nightmares. On this particular night, she happens to be in the home of Eli, an extremely good-looking guy from her former high school. Usually, kneeling over a hot, shirtless guy while he sleeps to give him a nightmare wouldn't be a problem, but tonight, everything goes wrong. For one, Eli's nightmare takes place on the grounds of Dusty's current school, a place for those with paranormal powers - such as werewolves, faeries, and nightmares - to hone their powers and, also, a place that Eli should know nothing about. Yet, to make matters worse, when Eli wakes up, Dusty's  magic refuses to work on him and the girl they've both seen dead in his nightmare is found to be murdered just hours later.

Needless to say, with such an engrossing beginning, I had high hopes for this one. Yet, to my immense disappointment, Chapter 1 is as good as it gets. Dusty is whisked away, back to her boarding school and from there, everything just gets worse. One of my biggest issues with this debut is the dialogue. It is obvious that Mindee Arnett doesn't really know - or understand - teenagers. Not only are the conversations in this story riddled with cliches, but the interactions with adults seemed too stereotypical and unreal to truly seem plausible. Dusty's mother, Moira, is cast in an utterly ridiculous light, failing to provide a foundation for a strong mother-daughter bond and Dusty's rivals in her school are just as predictable as your run-of-the-mill blonde cheerleader, from their expressions to the next words that come out of their mouth.

If all this wasn't bad enough, the romance set-up between Eli and Dusty is obvious - and far too boring - from the very beginning. As characters, Eli and Dusty bring nothing new to what we've already seen done time-and-time again and as a reader who went into this book looking for originality, I came across only the same old bland story lines, characters, and settings. From what I've heard from my trusted friends, it turns out that Arnett's debut has a love triangle to top this all off, one that seems wholly unnecessary since even I can already tell you who Dusty will chose, despite not having met the second guy yet.

Honestly, this book is just too simplistic, poorly executed, and unoriginal to be worth my time. I gave it nearly a hundred pages before giving up and simply have to arrive at the conclusion that it is not for me. I know plenty of readers who have found to be a fun and enjoyable piece, but I am unfortunately not one of them. If you don't mind a rather typical, but entertaining, paranormal mystery, The Nightmare Affair will most likely be your cup of tea, but if, like me, you were drawn to this novel because of its potential uniqueness in an overdone genre, look elsewhere. 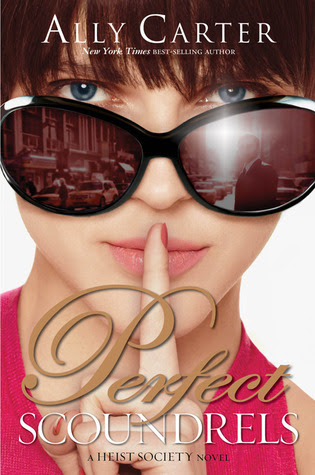 Obviously, Ally Carter and I need to have a chat. A long one. Preferably ending with her releasing her books all in the summer so I don't waste my day reading instead of studying for my tests or doing my physics homework, all which I have to do now at around 10 PM. Still, I have to admit, this was worth it.

Perfect Scoundrels is hands down the best HS novel so far and I hope they just continue to get better from her on out. Unlike the last two novels which focus solely on heists, Perfect Scoundrels is about stealing back Hale. Nope, he hasn't been kidnapped, but ever since the death of his grandmother, he hasn't been the same. Now, Kat has to do everything in her power to make it okay and bring back the Hale she knows, even if it means finding his grandmother's real will and taking on a criminal who may just be as clever as she is.

What makes Perfect Scoundrels such a phenomenal novel is the mere fact that Carter has written three-dimensional characters. Finally. While her previous novels were fun, engaging, and compelling, Perfect Scoundrels blows them all away by exposing the more vulnerable side of Hale, showing us the deep ravine that actually separates the worlds that Hale and Kat live in, and ultimately forging stronger relationships. We get to see a different side of Hale, but also of Kat, especially since family plays a huge role in this book. Not just the family you're born into, but the family of friends you decide to trust and who remain loyal to you, no matter what.

For me, though, Perfect Scoundrels came alive because of all the raw emotion in it. Carter still retains her classic style of writing, fast-paced plot lines, intelligent con plans, and she throws in a fair share of heists too, but there's so much more of everything in this novel. It is more, more than what we've come to expect from Carter and in the best possible way. I can now only keep my fingers crossed that this series will continue to improve and its characters will retain the depth we've been lucky enough to glimpse in this installment.
Posted by Keertana at 12:00 AM