For those of you who actually look at my "Currently Reading" sidebar, you'll have noticed that I sped through this series last week. Thus, instead of bombarding you all with four long, drawn-out, and rather similar reviews, I figured I'd condense them all into one giant series review below. None of these reviews contain spoilers for the series, but the blurbs do. You can read my reviews without needing to know too much about the series itself, but if you want a background, you can check out my review for the first novel, Magic Bites, HERE. Once again, none of these reviews contain spoilers for the series and are perfectly understandable even without prior knowledge of these books. 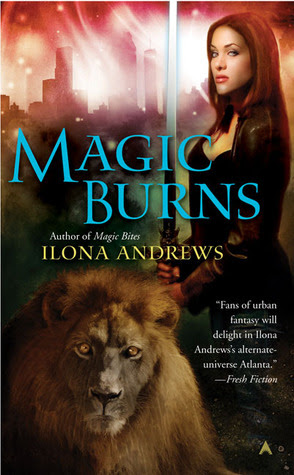 
As a mercenary who cleans up after magic gone wrong, Kate Daniels has seen her share of occupational hazards. Normally, waves of paranormal energy ebb and flow across Atlanta like a tide. But once every seven years, a flare comes, a time when magic runs rampant. Now Kate’s going to have to deal with problems on a much bigger scale: a divine one. When Kate sets out to retrieve a set of stolen maps for the Pack, Atlanta’s paramilitary clan of shapeshifters, she quickly realizes much more at stake. During a flare, Celtic god Morfran supersedes goddess Morrigan for witch coven worshippers of the Crow, and sea monsters from the Underworld enter via the Cauldron of Plenty. Kate starts looking for Pack maps and 13-year old Julia's witch mother, and ends up uniting shapeshifters and vampire zombie controllers to save the world.

Well, consider me humbled. The Kate Daniels Series is easily the most popular UF/Paranormal Adult Series out there, but after reading Magic Bites, the first novel, I wrote the entire series off. Magic Bites was decent. It wasn’t bad, but it wasn’t anything mind-blowing either. Magic Burns, on the other hand, is simply amazing. Ilona Andrews seems to have taken every qualm I had with Magic Bites, built upon it, developed it, and turned this series into one I just love.

With Magic Burns we begin to see Kate Daniels – the real Kate Daniels. Underneath her tough, mercenary exterior, she is every bit as vulnerable, human, and relate-able as we’d like her to be. Not only is she far more fleshed out, real, and flawed, giving her a three-dimensional and realistic appeal, she’s sarcastic, amusing, and her dialogue is never boring, even for a minute. Furthermore, with a new story line, better world-building, and the introduction of Julie, a young girl who brought out the best in Kate, Magic Burns was off to an excellent start. Now, just throw in a super sexy shape shifter, who just happens to be the Beast Lord, and we have a novel to simply salivate over.

Needless to say, Magic Burns utterly mesmerized me. I read the majority of it staying up late into the morning and later finished it while brushing my teeth, pulling on my clothes, and eating my breakfast. I just couldn’t take my eyes off the page and the feel-good, warm, and homely feeling it left me with wasn’t something I could resist for very long. If you weren’t a fan of Magic Bites, I’d urge you to pick this one up at once! It isn’t worth missing. 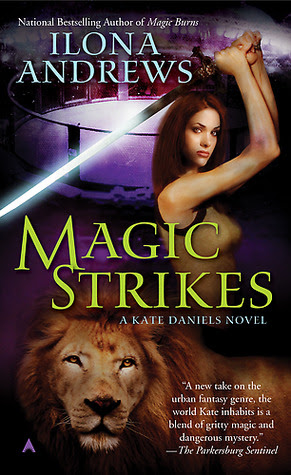 Investigator for the Order of Knights of Merciful Aid, Kate Daniels keeps humans safe in Atlanta. But when her werewolf friend Derek is dying in human form, from attack by the mysterious Reaper team at the Midnight Games, she and Curran, the Beast Lord, must fight together to win the Wolf Diamond topaz and save his Pack and her friends.

I’m telling you, this series just keeps getting better and better. While the greatest asset this novel has going for it is the attraction between Curran and Kate – and that may just be the reason I picked it up so quickly after Magic Burns - it blew me away in every other aspect as well. Magic Strikes amps up the stakes, not only on the general plot line, but especially on Kate, her life, and her past. If we thought we knew Kate before, she’s now become a confidant as we are privy to her inner secrets, understanding her like never before. Furthermore, this series finally seems to have some type of direction – a villain – to guide it. (Not like it needed one, mind you.)

Yet, what stands out the most to me is how much growth Andrews’ characters experience. It is an extremely gradual, extremely realistic kind of development that goes to show just how well Andrews’ know their characters, their limitations, and just what makes them tick. In addition, this husband and wife duo never loses their witty humor, entertaining banter, or sarcastic remarks that keep you flipping the page and mark a classic Kate Daniels novel. Perhaps most intriguing, though, is the amount of research these two put into their work.

Every Kate Daniels novel is relatively formulaic – Kate encounters a problem that she, as a merc, has to undertake and solve. Usually, these problems cause her to need to work closely with the Pack, and by default, Curran, and they all have some sort of mythological lore driving it. It is this aspect of it that grants so much mystery to the series as the research is authentic, the lore fascinating, and the ultimate incorporation of it into the novel phenomenal. It seems as if with every book I read, I keep becoming a bigger and bigger fan, not only of this series, but of this amazing duo as well. 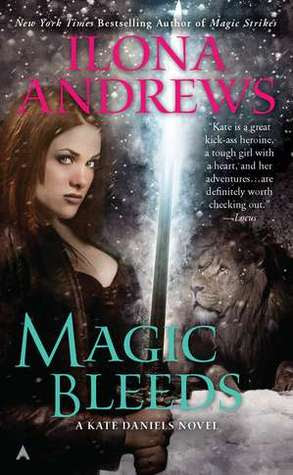 Magic Bleeds is, without a doubt, my favorite of all the Kate Daniels novels. Not only does it center around my favorite plot line yet, one with an evil villain, cruel family members, and past vengeances, but the sexual tension between Curran and Kate is off the charts. Seriously. It seems as if these two have taken forever to get together, but it is so worth the wait. Needless to say, I was re-reading their interactions throughout this novel with a silly grin plastered to my face and absolutely no regrets about how ridiculous I looked. It was all just so, so worth it. *sigh*

For me, Magic Bleeds was special merely because of Kate and what her romance with Curran meant to her. It seems as if, for the first time in this series, we see Kate for her inner insecurities – she, like every human, wants to be loved. Just because she’s a killer doesn’t mean she doesn’t yearn for the type of happily-ever-after romance that every woman wants and with Curran, she allows herself that hope – that area for vulnerability. For Kate, this is HUGE. Thus, seeing her struggle to reach a level ground with Curran, meet his terms while staying true to herself, trusting him to love her, believing that she can actually receive love, is all so endearing. Magic Bleeds definitely focuses on a mysterious plot with a killer, battles, and epic villainous encounters, but it also has something the other novels seemed to have lacked just a little bit – heart. 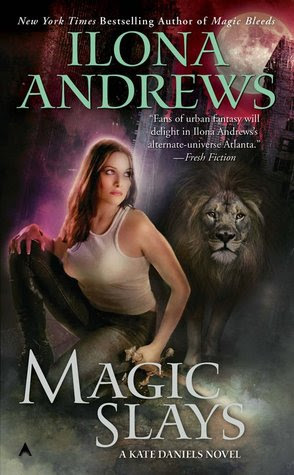 Plagued by a war between magic and technology, Atlanta has never been so deadly. Good thing Kate Daniels is on the job. Kate Daniels may have quit the Order of Merciful Aid, but she’s still knee-deep in paranormal problems. Or she would be if she could get someone to hire her. Starting her own business has been more challenging than she thought it would be—now that the Order is disparaging her good name, and many potential clients are afraid of getting on the bad side of the Beast Lord, who just happens to be Kate’s mate. So when Atlanta’s premier Master of the Dead calls to ask for help with a vampire on the loose, Kate leaps at the chance of some paying work. Turns out this is not an isolated incident, and Kate needs to get to the bottom of it—fast, or the city and everyone dear to her might pay the ultimate price . .

Magic Slays wasn’t nearly as good as Magic Bleeds, but it was pretty darn close. I’ve said it before, but it deserves repeating – this series excels because of its characters. Its formulaic-ness never becomes a problem simply because the characters are so lively and real. Even secondary characters such as Jim, Curran’s best friend; Derek, a werewolf who’s good friends with Kate; Julie, the orphan child Kate is guardian too; and especially Andrea, Kate’s best friend, have all played HUGE roles throughout this series and their continued presence, depth, and dialogue just contributes towards making this series as amazing as it is.

With Magic Slays, we begin to see the potential cracks in Kate and Curran’s relationship as they transition from their honeymoon phase to truly needing to work together, all within the constraints of Pack Laws. Much like with Magic Bleeds, it was Kate’s inner reflections that made this novel as remarkable as it was for me. Kate learns more about her past, her parentage, and her true purpose in life and with all these heady revelations, there is bound to be backlash, confusion, and worry. Ilona Andrews manages to convey these emotions so perfectly that, despite the fact that Kate is different from any of us, we can still understand and empathize with her. Even her relationship with Curran, although strained at times, was a pleasure to watch unfold merely because it was so realistic, all while maintaining a strong and healthy companionship.

It’s tough to pinpoint exactly what makes this series brilliant. It’s a combination of everything really; intriguing plot, hair-raising mysteries, well-researched lore, unique world-building, incredible romance, and, at the heart of it all, a protagonist who is impossible not to love. Kate is someone I actually look up to now, someone I admire, and she is just that real to me. Ilona Andrews has gained a fan in me and I only hope that, despite the disaster that was Magic Bites, this series continues to receive the hype and popularity it maintains – and rightfully deserves.


A huge, huge, HUGE thank you to Maja from The Nocturnal Library and Heidi from Bunbury in the Stacks for encouraging me to continue reading this series. I absolutely LOVED it, so you should definitely check out their reviews for these novels HERE and HERE!
Posted by Keertana at 12:00 AM