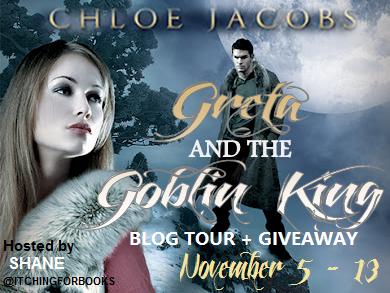 I am so excited to be a part of the Greta and the Goblin King Blog Tour, hosted by Shane at Itching for Books. On my stop today, I will be featuring my review of this debut novel as well as a giveaway of the book. You can see the other tour stops for the novel HERE.

Title: Greta and the Goblin King

Greta and the Goblin King is one of those novels that starts out with a bang, but ends, quite unfortunately, with a whimper. Nevertheless, Chloe Jacobs debut is certainly a novel to look out for and it is a start to a refreshing new series that I can already see myself eagerly following through till the end.

In the harsh, winter land of Mylena, humans are said to be the cause of a centuries-old curse. Hence, they have long been hated and the land is ruled by goblins and sprites, beings who lose themselves and turn into the most hideous versions of themselves every eclipse. Greta, a human girl, has unwillingly been thrown into this land. Upon saving her brother from an evil witch, Greta finds herself in Mylena, forced to fend for herself and survive, keeping her human lineage a secret all while searching for a way back into her own world. When Isaac, the new Goblin King, and an evil demon, Agramon, find out that Greta is, in fact, a human, she is forced to go on the run. Now, with the eclipse looming closer and closer, Greta has only days to find a way out of Mylena. Little does she know, however, that a great evil brews ahead...

Greta and the Goblin King is one of the few examples of Young Adult Fantasy done right. I was astounded by the world-building in this novel and the story of how Greta comes to be in Mylena is very slightly reminiscent of Hanzel and Gretel, which only further drew me into this tale. With its goblins, sprites, rich lore, and beliefs, Mylena is a character of its own, taking on a depth I wasn't expecting and leaving me feeling bereft when I left its land. I definitely look forward to learning more about this land shrouded in the enigma of a portal and although we are given more than enough information to satisfy us in this installment, I am certain that there is even more to this nation that we don't know.

Mylena aside, Greta was a fantastic protagonist. I enjoyed her sarcastic, witty narration and although she is an absolutely kick-ass bounty hunter, she is, at the same time, intensely vulnerable and oh-so-human. I appreciated her struggle to hold on to her humanity as her memories of her human life slowly slipped away and her uncertainty about whether or not to escape back to her own land if she could find a portal was strangely realistic. Greta is a changed woman in Mylena; the land has forced her to resort to some of her most primitive instincts, making a fighter out of her and a girl who would fail to assimilate back to the human world. Nevertheless, Greta's constant determination to let nothing deter her from her task was admirable and truly, she is a heroine that many will love.

Yet, for all its good qualities, Greta and the Goblin King unfortunately lost me when it came to the romance. While I loved the novels breathtaking landscape, intriguing protagonist, heart-pounding pace, and plot full of unexpected twists, turns, and heart-warming characters, Isaac, the Goblin King, failed to woo me as a love interest. When Isaac and Greta first meet, Isaac tricks Greta into allowing him into her dreams and as such, Greta begins to distrust him. Isaac then winds up taking the throne, even when he swore he didn't want to be king, and from there on out, Greta refuses to be taken in by his charms. At around the half-way point to this book though, something changes. Greta and Isaac suddenly begin to make-out as the attraction between them is raised higher and higher. While I definitely felt the chemistry between the two, I was left lost and confused as to why Greta suddenly began to care for Isaac. Isaac redeems himself in Greta's eyes, certainly, but never enough for the type of romance that bloomed between them. Furthermore, there is a hint of a potential love triangle in the sequel which made me cringe, especially as I so evidently love the second romantic interest, not Isaac, who is sure to win the Love Triangle Battle by the end of this series. If there is anything rewarding about the romance in this, it is that it never overpowers the plot. It doesn't make itself very known until the second-half of the novel and even then, Greta's priorities are clear and the plot never veers away from its intriguing premise.

Thus, Greta and the Goblin King is a debut I was immensely impressed by. Although I had a rather major qualm with its romance, that was easily outdone by the superb world-building, fascinatingly original plot, and kick-butt heroine. I am certain that Greta and the Goblin King is bound to make many "favorites" lists by the end of the year for this is a novel  that many will appreciate and even a romance that many will come to love, unlike I have. Now I can only sit back, kick up my feet, and wait eagerly for the sequel to this phenomenal debut to release - I can't wait!


A huge thank you to Shane at Itching For Books for providing me with a copy of this novel in exchange for an honest review and participation in this blog tour.


Giveaway!
a Rafflecopter giveaway
Posted by Keertana at 12:00 AM