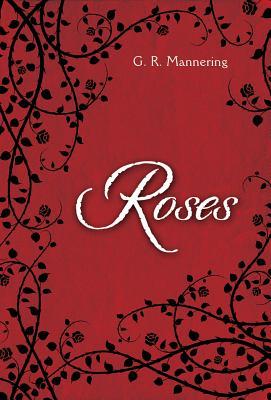 After having spent nearly an hour searching for the missing pages somewhere in the middle of my copy of Roses, I am forced to accept defeat. At just over three hundred pages, this is not a hefty volume and, sadly, not a complete one either. Although I enjoyed Mannering's debut immensely, its rushed ending, loose threads, and lingering questions leave quite a bit to be desired. After all, why write a "Beauty & the Beast" re-telling if the elements that make it a "re" telling are abandoned in favor of quickly fulfilling the "telling" aspect of the story? Quite frankly, I do not know.

I'd like to preface this review by apologizing if my voice seems bitter. I am. I am upset and rather irritable at present precisely because I was wholly invested into this tale, but found myself far from satisfied by the end. Roses, for all its flaws, however, is a truly magnificent tale. Set in a realm where magic is feared and those with Magic Blood are slaughtered mercilessly, young Beauty is a fearful enigma from the moment of her birth. With amethyst eyes and silver hair, she is unlike any normal human child and, once given to her aunt, Ma Dane of the House Roses, is kept away for much of her childhood. When, at last, the opportunity presents itself for Beauty - a name given in cruelty, mocking her strange appearance - to leave her home and live among the Hillside people far away, she leaps at the chance to escape and becomes the adopted daughter of Owain, the stable hand of the House Roses. It is from this point on where our tale becomes familiar, winding its way through the close bond that develops between Owain and Beauty, despite the hostility she receives even from the Hillside people, and thus the ill-fated rose that is plucked from a castle and speaks of Owain's demise finally comes into play, leading Beauty to the castle - and curse - of the Beast.

Where Mannering shines is in her subtle world-building techniques. Roses takes place in a world much like our own world would have appeared, perhaps a hundred to two hundred years ago. And yet, it is also a world of magic. Beauty, whose appearance is shockingly different, is thought to be of Magic Blood all throughout her childhood although her guardian, Ma Dane, denies it. Yet, Beauty's dreams portend the future, as have the dreams of all from the House Roses, and for this reason she must run, fleeing those who wish her dead. While this realm, with its systematic genocide of those with Magic Blood, is dark, it is also incomplete. We come to know very little of the wars fought between those with Magic Blood and those without and, moreover, the scriptures that tell of Beauty's involvement in the struggle are inconsequential as they play a negligible role in this stand-alone.

Roses takes time to build a fascinating scenario of Beauty, following her from her childhood to adulthood as she is discarded by many, loved by few, and universally feared. And yet, the questions we so desperately seek - where is her mother, who is her father, why haven't they seen her, why is she so important? - are never fully answered. Mannering offers us tidbits of information, presumably to keep readers satisfied, but I was far from sated. Additionally, the unveiling love story between Beauty and Beast is given minimal screen time. While we're given a thorough background into Beauty's life, truly growing to know her from inside and out, Beast is rather two-dimensional, bringing nothing new to this tale. Although his back story and enchantment is slightly different from that present in the original fairy tale, the bulk of his interactions with Beauty are unremarkable. I never felt much for these two as a romantic couple and though I enjoyed their time onscreen, I didn't miss it when it was absent and nor did I crave it for Beauty is an intriguing enough protagonist to keep readers engaged.

Nevertheless, Beauty's tale practically eclipses that of the original "Beauty & the Beast" story line, which is ironically where this novel falters. Mannering manages to balance both for a time period, but towards the end, she is forced to abandon the plot lines she has created, quickly veering back to finish off the tail end of our re-telling. Thus, I found myself shutting this book with a bang of disappointment. Roses is certainly an entertaining tale, gripping in every way and bringing a well-deserved dose of originality to this tale, but it feels unfinished. Especially as it is a stand-alone, not the first in a new series. While to some readers this novel may feel like a romantic tale, I wished for more grit and flavor. Mannering turned down the opportunity to explore the diverse world she created, leaving her story as a mere re-telling instead of going beyond its scope to the political scheme at hand, the evil sorcerers running about, the importance of powerful amulets, or even the outcome of wars fought. Roses is such an incredible world, brimming of darkness and shadows that promise to keep you up at night, but sadly they are pushed aside. Needless to say, while Roses is, ultimately, the story it is marketed as - a Beauty & the Beast re-telling - I was disappointed that it wasn't the story it could have been.
Posted by Keertana at 12:00 AM