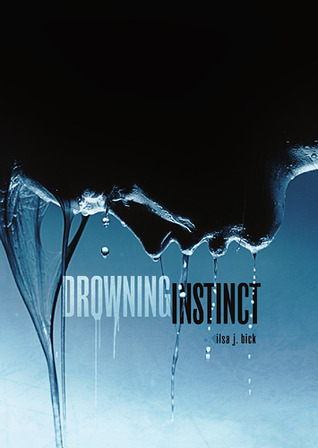 I've been wanting to read Drowning Instinct ever since I first laid eyes on its cover. Admit it: it's powerful. Unfortunately, the story Bick regales is more insane than powerful. Granted, I appreciate the moral ambiguity of the characters Bick has sketched, not to mention the complexity of their situations, but ultimately, this novel lacked a little something. Hope? Heart? Or maybe just purpose...

Drowning Instinct's first few pages are a dream, an intrusion into an original form of storytelling that truly worked, both for me and the novel as a whole. Jenna, our sixteen-year-old protagonist, is asked to speak into a recorder and tell her story. For me, reading Jenna's tale told through frank conversation made it easier to slip into her past. Yet, Jenna is chock-full of problems. Not only does she carry the burn marks of a terrible incident, complete with scars from cutting herself, but her family has a history of mental illness, her mother is an alcoholic, her father is constantly having an affair with a new woman, and her parents' marriage is falling apart. Moreover, Jenna's older brother is in Iraq and a taboo subject in their family. On one hand, Bick handles Jenna's issues cleverly, ensuring that they each are given an ample amount of screen time, but these multiple issues only served to make Jenna a sympathetic character. When stripped of her mental illness, her suicidal tendencies, her horrible family...there is very little to Jenna herself. Thus, I can't say I was a fan of this blatant attempt to garner feeling for the main character.

Due to its purposeful format, recounting events of the past, Drowning Instinct moves at a quick pace. It is nearly impossible to set down, merely because the reader simply has to know what is going to happen. Jenna is vulnerable and isolated because of her brokenness, so when Mr. Anderson, her chemistry teacher, reaches out a hand of kindness, Jenna grabs on. At first, Mr. Anderson is nothing more than a supporting teacher, willing to listen to Jenna, ensuring she gets home safely when her mother forgets to pick her up, and saving her from situations of molest. And yet, despite these kind acts, there is a niggling sense that something is wrong. It is; something is very, very wrong, for Mr. Anderson is just as screwed up as Jenna is, torn down by his past. In many ways, these two seek comfort and solace in one another, seeking to help each other stay above the water, not drown. Admittedly, a story of two people healing one another isn't so bad, but a sixteen-year-old girl and a teacher? It's more than a little sickening.

Where Drowning Instinct becomes interesting, though, is in the fact that Mitch Anderson really isn't painted to be a monster. If anything, he gives Jenna the support and courage she needs to begin facing her problems. With her parents dealing with their own doses of crazy, Jenna desperately needs an adult figure in her life to help her and, despite the nature of their relationship, Mitch does help Jenna - immensely. Although Mr. Anderson is proven to be many things, including a liar, Jenna can never forget the fact that he was there when she needed someone, even if it was just someone to listen to her. Nevertheless, I did feel as if the ending to this novel was a cop-out on Bick's part. Everything was tied up a little too openly, a little too loosely, and yet a little too neatly at the same time. We don't know if Jenna is ever going to be alright and, even worse, we have no hope for her future. Although I applaud Bick for tackling a taboo subject and putting it into a difficult perspective, either than her message of moral ambiguity, nothing else is left.

I don't think I can recommend Drowning Instinct. It's written well, filled with three-dimensional characters, and is impossible to put down. Yet, those final emotions that linger even after a book is over were bleak and confusing. Tabitha Sazuma's Forbidden tackles a taboo subject - an incestuous relationship - in a way that is far more effective and emotional. Drowning Instinct, on the other hand, holds you at arms length so that the greatest emotion you're likely to feel is shock. Bick's story isn't for everyone. I don't even think it was for me.
Posted by Keertana at 12:00 AM